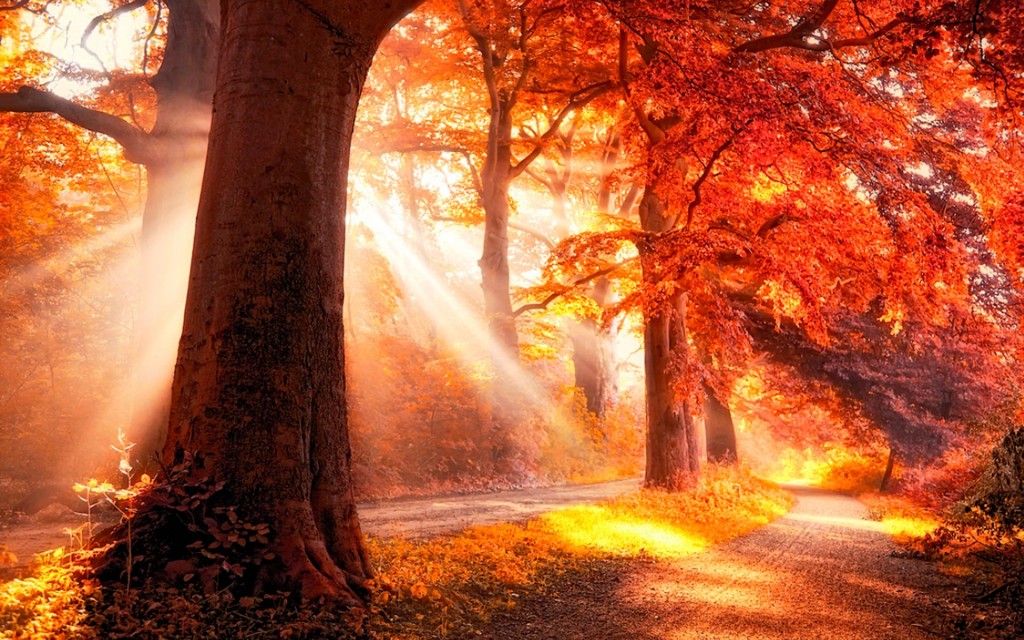 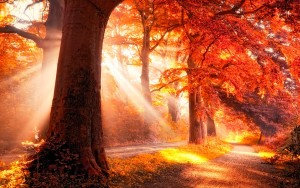 A quiet forest of maple trees in the autumn stretched before me, an infinite expanse that held me with warmth and comfort. As far as the eye could see, trees stood as tall, proud monuments of my past lives, both grand and insignificant. I walked in a forest where time ran as slowly as the amber sap glistening on the rough bark of trees. As I meandered aimlessly and peacefully I inhaled a deep, clean, woody scent, tinged with a slight sweetness. The air smelled like wind and autumn crispness… it smelled like fresh cinnamon sticks, like dried orange slices, like smoke and pumpkins and coffee. Sharp, aureate sunlight glanced off the mirror-like surface of a small, trickling creek which turned the gently flowing water into an opalescent reflection of the colors and vibrancies of the leaves. Spectral rays filtered through the canopy of leaves above, dappling the forest floor and transforming mine into a world where it rained vermillion and copper and golden and scarlet, all falling to create a carpet of fire at the base of nature’s towers. The water from the creek flowed gently but with intention… it was a lithe, crystalline snake.

As I allowed my feet to carry me uphill, the serene trickling of water against stone drew me to the source of the creek- a calm cascade that sung lullabies of amorphous desires. I closed my eyes and breathed in water vapor and the scents of apples and brown sugar, gingerbread and vanilla. Gradually, I began to hear a symphony of sounds. The birds’ carolings, the water as it trickled down stones and flowed downstream, the hum of crickets, and the rustling of leaves in the breeze all sung in flawless, rhapsodic four part harmony.

But my attention soon turned to the trees and to the leaves as they each reluctantly released their lifelong grip upon branches. Some leaves were easy prey; they were ripped by the wind from their sanctuaries as effortlessly as my finger cut through the crisp air. They fell helplessly into the tangled pile of bodies at the tree’s base, each new addition cutting off air supply, suffocating those that it fell on top of.

Others clung to branches stubbornly, refusing to be torn from the tree’s limbs. I admired these leaves.

As startlingly violent winds hinted at ensuing rain, the creek that had been flowing so calmly just a moment ago began surging rapidly, as though running from an oncoming predator. The former cascade was now a rushing waterfall of molten silver, spurting over rock, whirring and plunging into what became a fast-flowing river. The waterfall was composed of a million tiny threads of watery fabric that coalesced themselves together into one strong, lissome serpent before crashing and foaming at the base of the rock. The cacophonous sound it created drowned out the first roar of a distant thundering. As if with the purpose of adding to the churning, Caribbean-blue water, rain began to pour mercilessly from dark, threatening clouds.

And then, almost as if it were by magic, the rain ceased. The sky rumbled ominously but soon quieted. I squeezed my eyes shut, and before I opened them, I realized that I could no longer hear the roar and rush of the river; in its place I heard the quiet spillage of water onto a stone bed. I heard the soft slushing of currents with a honeyed lilt. Upon my bare toes, I could feel the smooth water as it slid, svelte, and my ears attuned to the tinkling sounds of its languid slink over rock beds.

Encouraged by the tranquil sounds consistent with serenity, I opened my eyes to a world transformed. 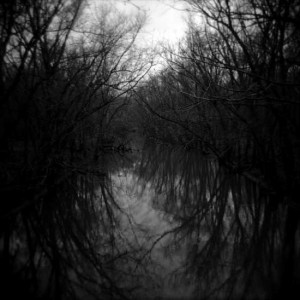 The rain has washed out the flaming colors from the autumn leaves. What had once been amber, hazel, claret, russet, saffron, crimson, and marigold were now monochrome variations of the same dull grey. Onyx to snow, with a thousand shades in between. The world had been leached of color, drowned in a black-and-white filter, drenched in achromatic gloom.

And just as time had seemed to move slowly beforehand, I now realized that it had slipped through my fingers faster than the rain had washed away the autumn’s color.

5 thoughts on “The Current of Time”