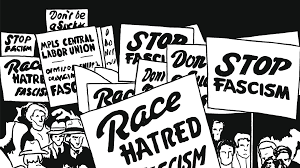 Officially, the word “fascism” considered independent of its historical connotation is a far-right, authoritarian ultranationalistic political ideology that thrives on the suppression of opposition. And today, this word is most commonly used by pro-democrats to classify Trump and his policy. The word has a crude power to it, and no one enjoys being called a fascist even if they don’t quite understand its true meaning. But it is this usage of the world that makes it possible to understand the truth about fascism: everyone loves it.

People claim they are against fascism typically because they don’t actually understand what it is. Like how conservatives will label left-wingers as communists, or how some men will label all female activists as Femenazis, people incorrectly put a label on “fascist” that will never include themselves. Still, it can be universally agreed that the fascist government system of Hitler, for example, was horrific oppression of those deemed to be the public enemy. But the same cannot be said about Mussolini. There is a surprising amount of mostly older Italians who believe that Mussolini wasn’t really a bad leader, apart from the war. Many are sympathetic towards him – saying that he was simply on the wrong side of things and how his intentions of a nationalistic Italy were noble. They cite his so-called achievements, quoting the phrase “quando c’era lui” (when he was here) followed by something like “i treni erano in orario” (the trains were on time). It’s fine to remember a time when perhaps there was peace, but his propaganda and manipulation of Italian society cannot be ignored, let alone his support of Hitler and Franco.

Neo-Mussolini supporters cling to the ideals of a man who frankly didn’t exist; one whose own propaganda continues to affect the citizens of his country to this day. The concept of suppressing the opposition and being ultranationalistic is unnerving and creates red flags within the minds of people today, though they cling desperately to these ideas of fascism without realizing it.

When authoritarianism is worded as “those who disagree with the state shall be punished and a common public enemy shall be declared and persecuted”, everyone recognizes it for what it is – oppression. Of course, Hitler and Mussolini never said it this way. Modern ideology is subtle in its methods of conversion: “Is there a social issue in society? Well, it’s not your fault, it’s theirs.”

Did you fail the job interview? The interviewer was racist. Are you unsatisfied with your nine-to-five? Blame the money-loving bureaucrat at the top. Are you a young woman unable to make it in the professional world? Blame the entire male gender – for it is a man’s world. It is a universal tendency to shift the blame to someone far away, or a concept of some oppressive power. In today’s age, many fish for “oppression points” just to seem like they aren’t privileged enough to be the board that others throw their darts at.

This isn’t to say that these issues aren’t genuine – unfortunately, racism and sexism continue to be seen within society. However, crying wolf about these issues when one is just looking for an excuse for their own shortcomings is a mockery to those who experience true prejudice and discrimination. But there’s no incentive to being self-responsible – if one even suggested another of exhibiting this behavior, he or she would be a victim to today’s “cancel culture”.

Unfortunately, creating a common enemy is something that politicians excel at, and it is something that the populace flocks to. With Hitler, it was the Jews. Minorities have traded places to fill the role of the oppressed: Armenians, African-Americans, Muslims, homosexuals, and countless others. Who will be next?

Simply put, fascism is the blame game. And the characteristics of a fascist society make us shudder, but many of them would fit into today’s world perfectly. Silencing of the opposition? Don’t you just wish those anti-maskers would stop spreading misinformation? Ultranationalism? These damn immigrants aren’t patriotic at all!  Yes – some degree of these is necessary for a country – for those who pose a health risk to others should face some consequences, and a country can’t suddenly decide to let every prospective immigrant in. But there are limits to such measures, and it is this gray area that fails to exist in the minds of polarized people.

One shouldn’t condone their friend infuriatingly calling their road examiner racist for failing them. Nor should one claim that a colleague is sexist due to no particular reason – in today’s world, these allegations are serious enough to cost one their livelihood. When these issues do arise and there is evidence to warrant discipline, then such reactions can be justified; however, each individual needs to look within themselves and ask if perhaps they are actually the one to blame.

Until we come to terms with ourselves in this regard, fascist thinking will continue to thrive within the hearts of discontented individuals forever – manifesting new forms of oppression on different kinds of people. The work done in the past to establish more equality has been tremendous – whether it be economically or socially. Once again, we must rally against the polarization and fight the fascism of today’s world. Ironically, in the words of Mussolini himself, “War alone brings up to their highest tension all human energies and imposes the stamp of nobility upon the peoples who have the courage to make it.” Let us twist his words: we shall be noble and wage war upon fascism and inequality together.

2 thoughts on “Fascism in Today’s World”