This post was inspired by the movie Life is Beautiful. It is written in the perspective of a Jewish girl in the 1940’s, around 11 years old.

“No Dogs or Jews Allowed” 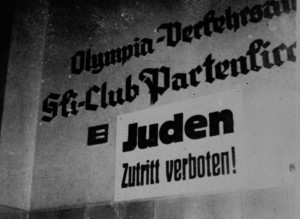 The sign was hung in the window of the bookstore that was once my favourite. I fell madly in love with the tales of beautiful princesses, swept away from evil by a charming prince who happened to be in the right place at the right time. Sometimes I would hope to meet my prince looking for a book too, but then I remember that most boys look away after they see the yellow star pinned on my jacket.

I don’t understand why the sign says, “No Dogs or Jews Allowed”. I know that having a dog in the bookstore might disrupt the peaceful atmosphere, but why Jews? Father used to take me at the end of each month to buy a new book, even though I always chose ones with almost the same story. We would read them late at night, even though Mother sometimes got mad and told him that I needed to sleep. It was our secret. We never did anything bad in the store! I even used to talk to the lady at the counter; she always said that I was her most loyal customer. Now, when I try and wave to her through the glass, she looks away.

How come the sign doesn’t say, “No Dogs or Mean People Allowed”? There was a boy who lived right next to us named Alexander who never had a kind word to say about anyone. Once, he started hitting me over and over, and wouldn’t stop even when I started crying. I had to beg him to let me get up, because there was no way I could fight off a boy that big. When Father finally came and found me, he didn’t even yell at Alexander. He said that he was only doing it because we were different, because he didn’t understand. We had to move to a different neighborhood the next month. Father said it would be nicer to live with all Jewish people, like a big family. I liked our old house better.

Why am I so different from all the other kids? All of my old friends aren’t allowed to play with me because their parents think that I’m dirty. Last week, I heard a group of other girls make fun of me because I had “a nose too big for my face”. I can’t help what my nose looks like! Some of them have noses that are even bigger than mine, but they don’t make fun of each other. It’s always me. Sometimes, I imagine what it would be like to have blonde hair and light eyes. My hair would glisten in the sunlight and would be soft as velvet. My eyes would remind boys of an ocean, a forest, a magical place they wanted to explore.

Maybe if I looked like the German girls, I would be allowed into that bookstore and a prince could fall in love with me. He might even notice my pretty hair and forget about my nose! I’ll tell Father I want to dye my hair as soon as he gets back. Right now, he’s on an important journey with a few other men who go to the synagogue with us. I hope I see him soon.

2 thoughts on “No Dogs or Jews Allowed.”