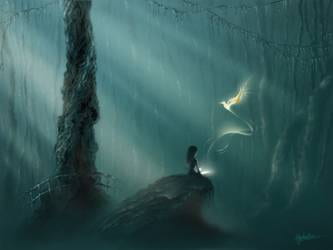 Prompt: What do these texts suggest about the ways in which individuals respond to the conflict between illusion and reality?

Through the character Willy Loman, author Arthur Miller suggests that individuals will immerse themselves in illusions and nostalgia of the past as a result of the blind pursuit of personal ideals. As such, the lines between Willy’s illusions and his reality begin to blur in his mind, leading him down a spiral of denial that inevitably results in his downfall.

In ‘Death of a Salesman’,  Miller uses Willy to depict how individuals create their illusory world to cope with the circumstances of their reality. Initially, Willy perceives that his son, Biff, failed his math exam as a result of the dislike his math teacher held for him. As the novel progresses, it is revealed through Biff’s friend, Bernard, that Biff failed the math exam not because his teacher disliked him, but as a result of overconfidence and lack of studying. This moment reveals how Willy has become so enticed in his illusions as a result of not being able to accept his circumstances. He immersed himself into an illusory world where he truly believes his son is not at fault for his failures. Willy has convinced himself that his son is too great of a man to have been responsible for his failure. And rather than accept the truth, he creates this illusion that Biff’s math teacher is at fault. This illusion created later leads him further into the illusory world along with a certain nostalgia for his past. This nostalgia that he is still a well respected, well-earning salesman. This nostalgia causes him to further spiral down this web of illusion and denial is showcased in the passage in which he converses with Charley.

As Willy continuously dives deeper into his illusory world, Charley seemingly threatens his illusions. When conversing with Charley, he attempts to offer Willy a job for the second time, he says, “I am offering you a job.” To which Willy replies, “I don’t want your goddamn job!” (Pg. 97). When offering a job for the second time, Charley is met with an angry Willy who furiously rejects his offer once again. Willy has just gotten fired, and in his mind, he is not able to comprehend it. In his mind, he believes he is still the Willy of the past, a respected salesman built on self-worth which he prides himself on to this day. In reality, Willy is no longer able to accept that that image no longer portrays the man he is in the present. In reality, he is penniless and without a job. This pride on which Willy built this illusion is threatened when Charley offers him a job, which is why he responds with such intensity and aggression. It depicts how Willy has become so immersed in his illusion that he believes he is still respected and a more prominent man than he is. Similar to how he believes that Biff is greater than his failures. These illusions Willy continues to manifest are a direct result of his blind pursuit for his ideals, mainly the American Dream. He clings to this idea of the American Dream, although his circumstances have made it impossible for him to achieve it. His denial of reality and blind pursuit of his ideals compels him to create illusions as a means of coping. He is not able to grasp his reality, or rather, he does not wish to. As such, he leads himself down a spiral of illusions and denial that distort his reality. This distortion inevitably leads to his demise.

As the novel comes to an end, Willy’s unwillingness to accept his reality becomes the reasoning behind his demise. Willy becomes forced to come to terms with reality, resulting in him taking his own life. “There is the sound of a car starting and moving away at full speed.” (Pg. 136). In the final moments of the novel, Willy takes his own life so that his family can collect the insurance money to start a business. In these moments, when being confronted by his brother, Ben, Willy’s illusions begin to dissolve forcing him to see the truth of his circumstances and his once blind pursuit of the American Dream. After forcefully seeing reality, his mind drives itself into insanity which leads him to commit suicide. Willy has initially created this illusory world in order to maintain a sense of heroism and pride in the fact that he provided for his family. This illusion soon became his reality as the lines between his illusory world and reality blurred and dissolved. The sheer intensity of his denial became his downfall as his unwillingness to confront reality and maintain his pride led to his death.

When an individual’s reality clashes with the pursuit of their ideals, they may immerse themselves in a world of illusion to avoid reality. Much like how Willy Loman does – creating an illusory world where the lines between what he perceives to be true and what is true continue to blur until it all comes crashing down. In Willy’s case, this crash was both literal and metaphorical as he chose to take his own life. This depicts how individuals can be driven to madness through their actions and inactions in accepting their reality.