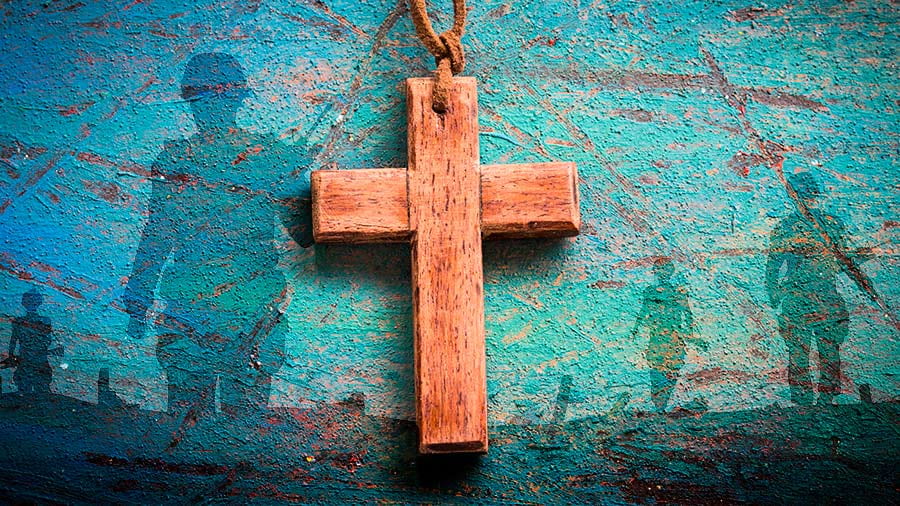 I can hear the cannons calling out to me across the field. A man’s scream fills the trench as we are covered in a spray of mud. The rock and soil beneath me is drenched in another man’s blood as I use my gun to cast upon the same fate to another man across the battlefield. This was the simplicity of war. Blood. Guns. Death. There was nothing more to it. Yet somehow this war was more than simple in the eyes of a soldier. It stayed in a soldier’s mind and heart as they travel back to their families with the echo of their brother’s screams. I lay upon the dirt praying to God to hear the cry of the people, to end the innocent bloodshed of those who are fighting a battle they want nothing to do with. I look to my right and to my left. Each man beside me has a look of terror in their eyes. One by one each of them die by the hands of another man across the battlefield.

Waking up in a cold sweat, my mind turns those horrid images over and over again. I fall to my knees looking to the Lord for strength to break the constraints tying me to my past. Despite the number of prayers I utter from my cracked lips, I will never be able to escape the circumstances of war. As a young soldier at the age of 26, I was put on the front lines, a place where no one expected to return from. The day I was told by my commanding officer that I was to join the groups at the front line, was the day I realized no one was able to escape the inevitable war looming upon the country. The circumstances of war were inescapable for I had a duty to my family and my country to fight for what we love and to protect the freedom of all who lived here. One of the toughest parts of the war was saying goodbye to my family, to my little girl. Staring up at me with innocent blue eyes, I knew that I had to fight for her and for the freedom and peace she deserved.

Now she is gone. My wife and I carry on our lives despite our uneasy and broken hearts. All we can do is ask God to look after our little girl, as he looked after me. When I returned home from France my little girl was no longer the individual I had left her. Her little hand no longer wrapped around my finger but she folded her hand into mine as a young woman.  Our little girl never calls for she has moved on from the monsters of the past to which I carried home after the war. Each and every night the monsters still hide beneath my bed, waiting for me to fall into a deep sleep. Reaching into the depths of my mind, my monsters drag me into the darkness of the past. It is in the dark abyss that I frequent the memory of the day that another man across the battlefield took my arm.

Laying in the trench with my unit, we carry out our duties, just like every other day. But today was not like every other day. Throughout the previous night, the enemy made unknown advancements across the battlefield, nearing our trenches. It was in these trenches that they threw grenades and showered us in gunfire. My sight blurred, my ears were ringing. Making out the figures, I saw dozens of  my brothers lying on the dirt, soaking it in blood. The Lord must have heard my earlier prayers for another unit of fellow soldiers came through with a line of defence, pushing the enemy back. It wasn’t until my knees suddenly collapsed beneath me did I acknowledge the excruciating pain radiating throughout my shoulder and arm. Below my elbow, I couldn’t see my hand, only the jagged cut of bone and the rush of blood.

I wake up each night to scratch my missing arm as I feel the mosquitoes feeding upon it. But it is no longer there, and nor are the mosquitoes. Instead it lies somewhere on a cubit-length of battlefield in France, fertilizing the soil. It has been every night for the past 2 years since my return home, that my monsters of the past visit me. This is the aftermath of war, the circumstances I have been placed in. Despite all I have lived through, I make an effort to not let my circumstances define me, but to show my strength.  I know now, that the monsters are not the ones beneath the bed, but the ones we carry as a result of our circumstances. Instead of turning on the lights to escape them, I fall on my knees and pray.