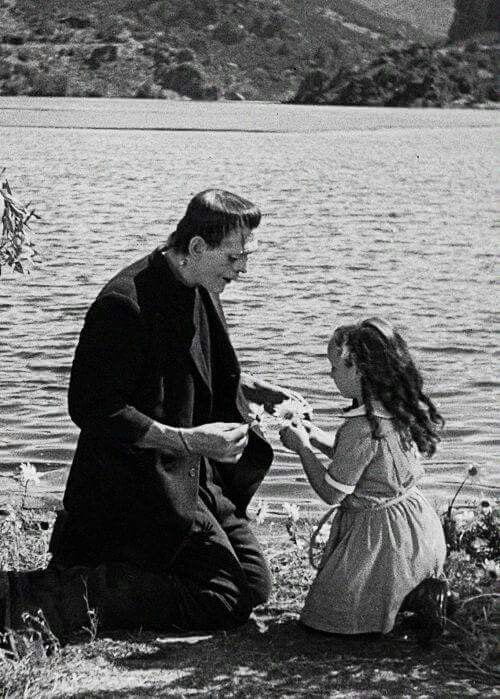 Often times, we have a desire to attain things – these things could be physical, tangible items or on a more abstract level, something like love. We should grow up with love, but there are many who never share this intimacy with another because they have no one. This desire for companionship and a sense of understanding from people is a weakening force; it makes an individual vulnerable as they perceive themselves to be outsiders to a world where love comes so easy for others. Furthermore, it is natural for an individual to want their love to be reciprocated, and this is, often times, what motivates an individual to dictate what actions to take. Eventually, as one is made more aware that they will not receive the love and compassion which they give to others, individuals will no longer desire love, but demand it. Perhaps one of the greatest examples of this is seen through the development of Frankenstein’s monster. In Frankenstein: The Modern Prometheus, Mary Shelley uses the monster to exemplify how when an innocent, unloved individual desires the fulfillment which comes with being loved, they will pursue it wholeheartedly because they believe that by having this sense of companionship with another, it will make them happier. However, if during this pursuit an individual is denied what they have longed for and what they have been deprived of, they will begin to consider love with a more logical lens, as something which must be attained. By considering love to be this material thing, the monster’s motivations shift from something sweet to sinister.

An initially innocent individual will be motivated by their desire for companionship and understanding when taking a course of action; that is, these individuals look at love as something sweet and something which will bring them happiness. As the monster finally awakens, he gazes at the moon with ‘wonder’, and he is curious about the environment around him . His innocence defines the nature of his motivations and makes it wholesome and pure. The monster shows his sincere pursuit of companionship when he comes upon a child who is in need of help, and quickly assists him. He is motivated by the desire to have his kindness reciprocated.  However, he is instead shot at by the father of the child, which causes great pain to the monster. His natural inclination is to be an empathetic being, but he is being punished for his pursuit of love, which is when the nature of the monster’s motivations begin to shift. He saw a child and felt drawn to him because he found someone he could talk to – someone who would satisfy the emptiness which he felt whilst being alone. Despite his good nature and the sincerity of his motivations, he is rejected and denied what he wants. Innocent individuals will blindly pursue that which they think will make them happy, which ultimately sets them up for failure and shifts the motivations which direct their actions.

After an individual is denied the love and understanding of another, they will become more logical in their approach of attaining this love, but the nature of their motivations will still remain wholesome and pure. With the De Lacey’s, the monster is much more hesitant and doubtful because of what had previously happened. He is afraid of being denied of companionship again, which is why it takes him longer to decide on his course of action. Upon seeing the hospitality of the De Lacey’s and their love for each other, the monster begins to have ‘sensations of a peculiar and overpowering nature’, which is his desire to be loved. After seeing this love being shared amongst others, his original motivation for his pursuit is once again rekindled. All these encounters with the family give him a sense of hope, revealing how the sincerity of the monster’s initial motivations remains the same even now. However, upon confronting the family, he is considered once again as this ‘abhorred’ creature who needs to be removed from their home, but all he wants is the warmth inside – all he wants is to share the love that they already have. This rejection hurt even more than the previous one because this time the monster did not just blindly pursue his desires; but rather, he had a more logical approach in how he was going to get this love. Individuals, upon rejection of what they had desired, will shift their thinking and, therefore, the nature of their motivations and begin to picture love as something which they need to attain by force rather than waiting for someone else to reciprocate it.

By being constantly denied companionship, love, and a sense of understanding from another, an individual loses the initially innocent motivations behind their pursuit and begins to perceive love as something which they must forcefully take. The monster grows to have a more materialistic approach when he confronts Victor, telling him of his tale and demanding for him to make a creature ‘of the opposite sex’. The nature of his motivations have now shifted to something much more sinister; that is, a self-centered approach to love where his initial sincerity and innocence of his pursuit have been completely eradicated. He uses logic to attempt to gain sympathy from Victor and manipulate him into creating another monster, which differs from how he had first blindly pursued this same desire for love. This illustrates a change in his motivations from being the sweet and beautiful pursuit of love, to the forceful attainment of this love. An innocent individual’s motivations for their courses of actions will shift, when they are not given what they have for their whole life been deprived of, to something selfish and materialistic.

Individuals will pursue what they believe will make them happy and fulfilled, which could be something tangible and material or something more abstract, like love. The pursuit of love and understanding from another is a noble one because of how pure and wholesome this pursuit should be. This desire for companionship with another will at first be an innocent and beautiful pursuit because it provides happiness to all who share that connection. However, when an individual has, their entire life, been deprived of this love and is constantly being denied it despite their persistence, they will begin to consider love with a more logical lens – as something which must be attained. These individuals will not blindly pursue this desire for love like they first did; but rather, they will be logical and manipulative in deciding on their course of action. This makes the nature of an individual’s motivation much more shallow and selfish, juxtaposed with the pureness by which they first pursued it.