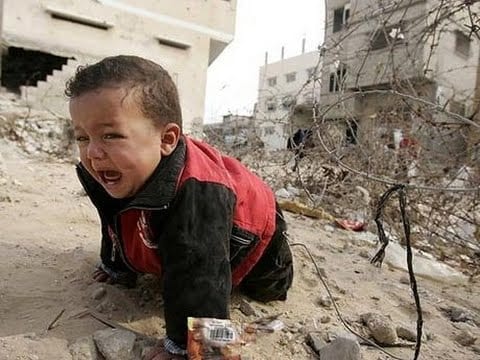 The following poem, We Shoot Children Too, Don’t We, was written by Dan Almagor in 1989 as a response to the violence occurring during the Israeli-Palestinian conflict, particularly the First Intifada. The first Intifada occurred after the initial occupation of Israelis in Jerusalem and surrounding areas; this was deemed injustice in the eyes of the Palestinians. Ever since the first outbreak in 1987, Political conflicts and threats to national security has not ceased. Although Almagor is an Israeli, he addresses the cruelty imposed on the Palestinians by the Israeli military and by doing so, he gains sympathy for the ‘enemy’.

We Shoot Children Too, Don’t We

Most of these people truly desire

To harvest their olive trees

Most of these people truly desire to raise their kids

Not to throw stones

But to study in peace,

To play in peace,

And to raise a flag.

And facing that flag, to cry

As we did, that night, then, excited as we were.

Right in the world

To rob them of this desire.

These tears, which always, always

Come after all the others.

Let us start preparing our defense.

All those who actually did it,

And those who hushed it up,

And those who said nothing,

And those who clucked their tongues, saying

“Something must be done, really;

(But not tonight. I have a concert,

Yes, we’ll all get our summons one day

For the Colonels’ trials.

The Colonel’s trials are coming,

Their time will come, it must be so.

The trials of the Generals, the Colonels,

The division, the battalion,

And the platoon commanders.

There is no escaping it.

This is how history works.

What shall we say?

What will the Colonels, the Captains, the

What will they say

Of those terrible beatings,

Of houses blown up,

And most of all, the humiliation.

Of patients forced to wipe the writing

Of old men forced to take down a flag

From an electric pole,

Who were electrocuted, or fell

And broke their legs.

Of the old water carrier

Whom soldiers ordered off his donkey

And rode on his back, just for fun.

Who do we think we are?

Who gave us the right

Ignoring the obvious: They are as human

At least as human as we used to be

Only forty-one years ago.

No less diligent, no less smart.

As sensitive, as full of hope.

They love their wives and children

And our children now shoot theirs

With lead, plastic bullets, and gas.

The Palestinian state will come to pass.

Not a poet wrote this.

And life goes on as we very well know.

Weddings, and births, and deaths all the same-

But just the shame of it. The shame. 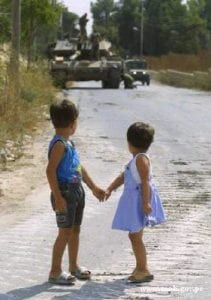 As I was doing research on the background of the history of Israel and Palestine, I came across a video of victims that were sharing their story of losing loved ones. Their heart wrenching stories brought tears to my eyes and I could not fathom the extent of their pain and courage to move on in life. The Israeli-Palestinian conflict made an appearance long ago in history and has not reached an end. Throughout this long period of war and death, many innocent, young lives have been martyred and many continue to face this threat. Political tensions, land claims, and religious values all seem to flash in the headlines of global news and local newspapers; the humanity of people seems to have ceased in the chaos of everything. I wrote this poem for the young ones who loose their lives everyday – they were born to die in a world filled with cruelty. It was written in response to the prompt: Discuss the ideas developed by the text creator about an individual’s attempt to reconcile the desire to act independently with the need for security. (June 2005)

Humanity, Where Are You?

Your little legs scampered across the remains.

Exhaustion drove you to your knees,

and you lay hidden

beneath the swirls of dust.

Your body gives in.

I heard you from afar,

But only from afar.

They shoot children too,

Who gave them the right?

crying out from the depths of horror.

To the cries erupting from the

Flames of the Molotov cocktails.

to the young blood which

in the holy land.

They are as human as we are.

At least as human as we used to be.

But all I see are the tear filled eyes

yielding up their spirit