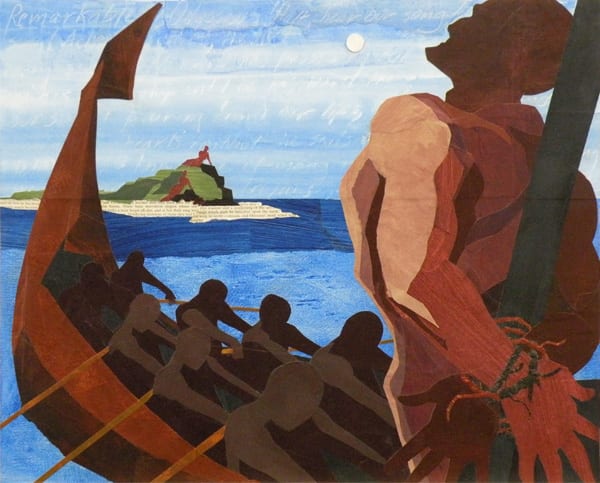 Prompt: Write a well organized essay in which you discuss how the poem’s controlling metaphor expresses the complex attitude of the speaker. (1996)

As if attesting to the legacy of centuries of amalgamation, the marginalizing stereotypes related to femininity highlight the redundant notion of women as objects that only invoke wanton desire. In such stereotypes, one comes to realize that history is in the hands of those deemed fit by societal convention – those gifted power through the norm. It is through the controlling metaphor of the siren song’s allure – the call to regain power and independence – that Atwood provides a voice to the sirens once silenced. Between using repetition to induce a sense of imbalance – paralleling the synthesis of gender expectations over the years – punctuation – to enhance the mocking mood and tone of the metaphor – and sound devices, Atwood’s “Siren Song” utilizes aforementioned stereotypes in order to take advantage of those that conform to them, harnessing the desire for which she has been marginalized in the quest to restore her power.

To speak of sirens is to speak of the unnatural – that which exists at the precipice of illusion and deceit, unspeakable desires flourishing into a means to reclaim power. This atmosphere of the unnatural so apparent in the metaphor of the Siren’s song is further amplified through the use of repetition, drawing the reader inexplicably towards obedience as the Siren draws power from her apparent vulnerability. In the context of the natural world, the number three is seen as unnatural – one need only to look at their own composition to realize nature’s tendency towards pairs. In ancient Greece, the birthplace of the sirens themselves, the number three signifies strength and the supernatural, evidenced by the rulership of Zeus, Poseidon, and Hades over the Olympians, and the Three Fates over destiny. Similarly, the three sirens in the poem grant an aura of the supernatural, whilst adding to the ancient, historical air of the poem itself – this emphasizes the decrepit tradition from which the stereotypes and adherence to societal convention in the poem stem forth. It is this blind adherence to conformity and convention that enables the Siren to manipulate her victim; as it is through the implementation of social stereotypes this hero finds comfort, the Siren’s ability to feign the fragility a woman should intrinsically hold allows her to lure him and regain the power she had been deprived. The repetition of the word “you” in the stanzas, “I will tell the secret to you, to you, only to you.” serves to grant the victim the same supernatural status as the siren herself – it makes him unique, special, and draws him in unnaturally against his will, almost as if it were a spell. In a bid to once again secure power and finally entrap her victim, the Siren invokes once again that, “Only you, only you can [save me], you are unique”. The triple sequence of the word “you” serves to invoke some higher power of desire in the victim of the Siren; he is unable to resist her call to be “unique” and of significance; this mold of hero is one he was always told he should fit, and he therefore fails to consider her ulterior motives. The repetition of the word “song” throughout stanzas 1-3, 7, and 9, indicate imbalance, inducing a trance-like state over the victim and the reader, which in turn parallels the repetition of convention that breeds complacency. By presenting herself as weak and vulnerable, the complexity of the power dynamic between man and Siren is expressed; in feigning vulnerability, the Siren diverges from the societal norm of a damsel in distress – her vulnerability gives her power over her complacent victim.

The most prevalent understanding of manipulation from the perspective of the Siren is depicted through the use of enjambment by Atwood, as the use of free verse lines that stimulate rhythm using punctuation, influence the establishment of mood to depict the actions of the Siren. Primarily in the second and third stanza, the disregard of punctuation through the limited use of commas and colons in the lines, “the song that forces men to leap overboard in squadrons even though they see the beached skulls the song nobody knows because anyone who has heard it is dead, and the others can’t remember,” creates a run-on effect that implies the stimulation of chaos by the Siren to attract the attention – and therefore desire and heroism of – the male audience to which she directly speaks. The intentional choice to follow the second and third stanzas with saturated punctuation, through the introduction of question marks and periods as in, “Shall I tell you the secret and if I do, will you get me out of this bird suit?” serves to imply the enchantment of the audience to which the Siren is speaking, as a calm and seductive tone is gradually approached. Through the universally understood, yet culturally adapted myth of the Sirens, it is known that the Siren preys on men to fulfil her purpose, as it is her role and appointed characterization through Greek mythology. Due to this understanding, the implication can be made that the entirety of the poem follows the process through which men are entranced; therefore, the use and purposeful disclusion of pauses depicts Atwoods indication of the Siren’s play on her own facade of vulnerability, as the punctuation reveals the intent founding the misaligned text that serves to establish trust and sympathy superficially with the audience. Atwood criticizes the normality of abiding by gender roles by empowering a universally villainized character, the Siren, to dislocate the typical shift of power and heroism from the men to the Siren. Typically in literature the males are depicted as heroic beings that fall victim to the sinisterities of Sirens; however, by using punctuation to rhythmically convey the entrapment of men, Atwood depicts the vulnerability of the men to fall victim to such ploys – thus twisting the societal convention of gender based heroism using the dominant Siren metaphor. This essentially creates the eerie mood, as the poet combines the concept of the Siren and societal norms to reveal how the speaker is using misconceptions of vulnerability pertaining to her as a tool to gain power by playing on the sympathy – and thus vulnerability – of those that remain unaware of the imbalance between the conventional understanding of the myth and the reality of the attitude revealed by the Siren at the end of the poem.

Following even the most brief read of the poem, one comes to notice the intentional use of sound devices positioned at specific transitions and shifts, as the use of euphonic and cacophonic sound devices enhance the layered mood and atmosphere relating to the concept of Sirens. The resulting stir of emotional response for both the reader and victim of the speaker depict how the establishment of the Siren metaphor invokes a seduction and ultimate cruelty on behalf of the Siren to reinforce the assertive attitude of the speaker – namely being gaining power through the use of her own artificial vulnerability, as well as the manipulation of the victim’s vulnerability. This manipulation is initiated by the use of soft “s” sounds in the first two and fourth stanza through words including “irresistible,” “forces,” “skulls,” and “secrets.” Starting from the first stanza, the speaker establishes a hiss-like tone towards the reader and intended victim; this hiss implies the literal seductive enchantment of the target, thus being the initial motive of the Siren. As the Siren chooses to utilize the target’s sympathy towards her own staged vulnerability, the euphonic use of the “s” sounds in the initial stanzas creates this lure – ultimately symbolizing the physical process of entrapment by the Siren following the duration of the poem’s read. As the hiss sounds transition into sharp “k” sounds through “come closer” in the seventh stanza, the speaker stimulates momentary cracks between the glide of the soft “s” sounds to imply the break of the illusion during the enchantment into reality and the true motive of the Siren. This concept of cacophony establishing cuts in the rhythm of the poem to reveal the actual attitude of the Siren is reinforced through the reappearance of the “k” sound in the word “unique,” as the final sharp break of the hiss right before a shift in tone connects the intentional use of the “damsel in distress” illusion with the awareness of the reader in identifying the true motivations of the Siren. The final stanza solidifies the attitude of the Siren as being one of selfish desire for the attainment of power through the fictitious vulnerability of oneself, as the final click in “unique” stiffly transitions the romanticized illusion to the reality of her own pursuit of desire.

Through the utilization of repetition, punctuation – purposeful pausing – and, finally, sound devices, one comes to the realization that the controlling metaphor of the siren’ song depicts a manipulation of societal convention for the pursuit of desire. Through ¨Siren Song¨, Atwood illustrates that an individual who is marginalized by societal convention will utilize those benefited by the to societal expectation as a means to regain the power the have been deprived – their siren song holding immense allure to those unable to fight. This is done through the manipulation of vulnerability – evident in both the perpetrator and the victim – as it is used by the Siren to induce a sense of sympathy from the victim through the use of the victim’s vulnerability, namely their belief in their societal valiance and superiority. Through the voice of the sirens, Atwood demonstrates that by utilizing the qualities for which one has been marginalized, an individual will be able to reject conformity and manipulate those who are trapped in its allure in order to restore their place of power – weaving order from a chaos all their own.