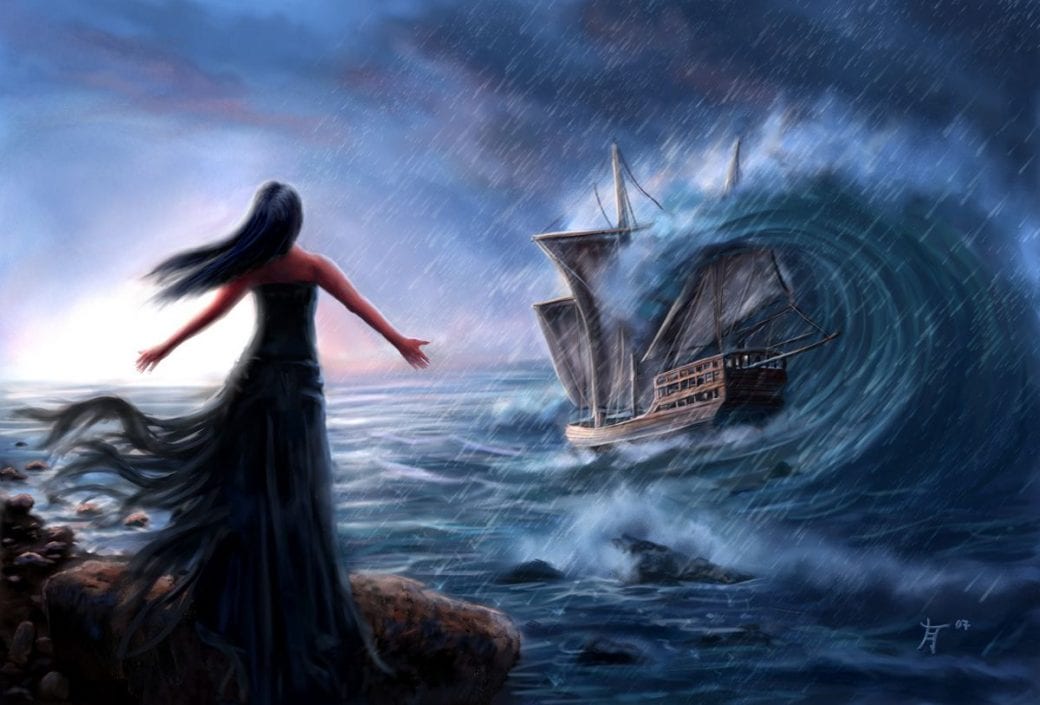 Diploma Prompt – “… the role self-perception plays when individuals seek to reconcile the conflict between illusion and reality.”

This is the one song everyone

the song that forces men

to leap overboard in squadrons

even though they see the beached skulls

the song nobody knows

because anyone who has heard it

is dead, and the others can’t remember.

Shall I tell you the secret

and if I do, will you get me

out of this bird suit?

I don’t enjoy it here

squatting on this island

with these two feathery maniacs,

this trio, fatal and valuable.

I will tell the secret to you,

to you, only to you.

is a cry for help: Help me!

Only you, only you can,

it is a boring song

but it works every time.

The Manipulation of Illusions

Self-perception is the way an individual comprehends their own image, thus being the way they perceive themselves. Oftentimes, individuals possess a deluded self-perception that does not align with the way they are externally seen in reality; however, when this self-perception depicts an awareness of one’s surroundings – namely being an understanding of how others view one in reality – an individual has the capability to utilize this awareness to their own advantage by manipulating their external perception using their self-perception. This being said, a metacognitive self-perception can allow an individual to control their reality and attain a desire by manipulating any illusions associated with their external perception through the depiction of a persona that has been purposefully chosen. This deceitful manipulation of an external perception to serve one’s desire is metaphorically displayed in Margaret Atwood’s “Siren Song,” as the poem centers on the action of a cunning Siren that utilizes an understanding of a universal perception of her to entrance her victims to their demise, which is characterized to be her ultimate desire. By using her awareness of the generalized misconceptions and illusions held by the general masses of a Siren, the Siren captures the trust of her victim to secure the attainment of her desire. In this poem, Atwood explores the idea that when an individual has a self-perception that displays an awareness of how they are externally perceived, they are able to maintain a control over their reality by manipulating illusions associated with the external perception. As a result, this awareness allows one to attain a desired reality by utilizing the illusions of others as a means of getting what is wanted.

When an individual possesses a metacognitive self-perception that indicates an awareness of how others view oneself, the individual will use the awareness of associated illusions and falsities to their advantage through the deceitful adoption of said illusions to obtain a desire. This will result in the manipulation of the people that abide by the external perception, as their own lack of awareness will allow the individual to use the illusions of perception to attain a desire – namely being their understanding of reality. The initial indication of an aware self-perception by the Siren is illustrated in the lines, “…with these two feathery maniacs, I don’t enjoy singing this trio, fatal and valuable.” By directly referring to a trio, Atwood reinforces the reader’s understanding of the Siren myth by painting the scene of the three Sirens, while one of them continues on to deliver the lines of speech from the poem. Through the lens of the speaker – the Siren – the use of terms such as “feathery maniacs” implies a mockery done by the Siren of herself, as she condemns the conventional role of the Siren through the referral to her bird-like costume. The fact that the Siren clearly ridicules her own appearance suggests the distancing of the Siren from the myth, displaying her own understanding of the preconceived assumptions both the reader and the victim previously have of the Siren myth. By continuing to use the term “fatal” in the description of the trio, the Siren implies this awareness of her own fatality and the potential of such actions that others see in her through their own prior notions of the role of a Siren. Through the recognition of both her own inclination for fatal actions and the bird-like perception through which others see her, the Siren continues on to use her awareness of the external perceptions as a tool to establish trust with the victim and reader, as her process of distancing herself from the Siren role enables her to adopt a more humanistic persona that establishes a relatability between her and who she is targeting. The amalgamation of both the illusions and misconceptions transferred through myth as well as the usage of awareness of perception are further used by the Siren to obtain her desires in the line, “This song is a cry for help: Help me!” as she is seen to take advantage of her awareness of external perception to deceive the target into believing in her vulnerability. Following the criticism of her “feathery” appearance and “fatal” role, she establishes a trust from the target and thus uses this trust to lure the target into believing in her vulnerability, as she now utilizes both perception and the created illusion of frailty and her “damsel in distress” persona to attain her desire. The actual motives of the Siren and the validity of her desire – namely being the death of the passerby – is reinforced in the line, “it is a boring song but it works every time,” as clarity of the Siren’s intent is discovered by the reader. As the Siren song “works every time,” the repetition of such actions and confidence of the Siren can be implied, as Atwood depicts how reality and desire can both be fused in the process of reconciliation between illusion and truth; the possession of an understanding of how others view oneself can allow an individual to utilize illusions as a means to make their desires a reality, just as depicted by the actions of the Siren. Although in reality most individuals do not go through such drastic means to use external perception and illusion to deceive others into attaining a desire, this process of awareness to manipulate others’ unawareness can be seen in several typical situations in life.

Throughout my own limited, yet adequate years of experience, I have witnessed and experienced such use of awareness of perception for the detriment of others through their own unawareness. Although I have never used an aware self-perception in such a way, I have experienced being a victim of unawareness. When I participated in a technology-based competition (Technovation) with my peers, where we had to develop a prototype of an app and present it in a competition, we encountered students from several other schools in the city. Commonly in such competitions, the prestige of schools and the superiority of certain students often becomes a source of interpersonal conflict; when my peers and I participated in this competition, we held perceptions of superiority in regards to certain schools that we competed against – this prompted our hesitation and degradation of confidence in regards to the potential of our own app and its success in the competition. This awareness of how others perceived them by certain school teams was evident following the end of the competition, as the teams utilized their awareness of their prestige to their advantage by harnessing the hesitation of other teams to instill fear and a sense of incompetence, whereas their own apps were equivalent in sophistication to those of every other school. Since the final round of the competition required a pitch to a panel of professionals, this instilment of fear and nervousness was prominent as various teams, as well as my own, feared humiliation when our work was compared to that of the few well known schools; however, when the competition ended and we got a chance to inspect the work of other teams, we realized our work was up to par with even the most socially hyped schools. Simply put, their own possession of a self-perception that indicated an awareness of their prestige’s intimidation allowed certain teams to manipulate the confidence and illusions of other teams, including ours, to attain their desire of winning the competition. This usage of the interplay between illusion and perception allowed the teams to translate their desires into their reality, thus being their way of reconciling illusions and reality through the clever use of perception.

Although self-perception centers on the understanding of how one sees themself, a significant manipulator of such self-perception can be an individual’s awareness of how others see them as well. This awareness of how others externally perceive an individual can cunningly be used to one’s advantage through the twisting of illusions others hold in association with the external perception, for the individual to transform their desire into a reality. In order to manipulate such an external perception, an artificial persona can be adopted, as is depicted by the Siren in Atwood’s “Siren Song,” to use devices such as vulnerability to deceive the understandings of others. This was likewise exemplified in my own experiences of certain school teams using their persona of prestige in a competition to manipulate the perception of other students, as the prestige induced the intimidation of other students , thus being a lack of confidence – automatically giving certain teams an advantage over others. Overall, the reconciliation of illusion and reality can be done in relation to the illusions of others, as a self-perception that depicts a metacognitive awareness of one’s surroundings can allow one to use the illusions of others to satisfy their own reality through the pursuit of one’s desires.

This was my rough poem from the poetry seminar:

The chaos in which I am placed like a spectacle

To protect my own survival I sit as a scaled show

I don’t enjoy it here, looking picturesque and mythical

The fingers of the chilling winds work with the droplets against me, slowly, mockingly moving up my spine till this chaos becomes a numb void between my eyelids and soul

The ship drifts dramatically closer and my eyelids shift to form a film to protect my soul,

Shall I tell you a secret

Only you, and to you only will this I tell

And you shall know