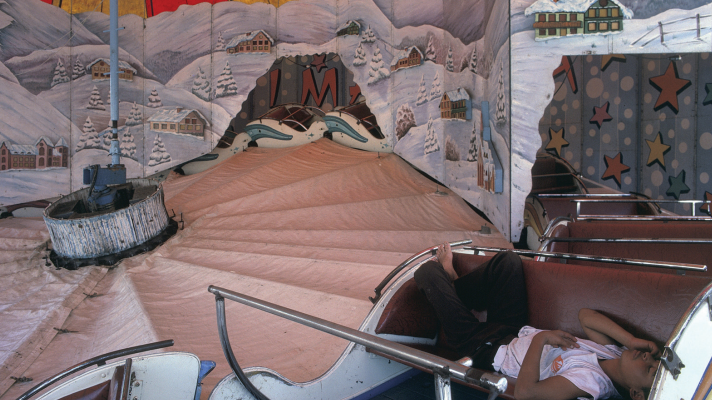 PROMPT: What do these texts suggest to you about the ways in which individuals deal with the
uncertainties of the past? (January 2015)

*I responded to the above visual titled “Dislocations” by Alex Webb.

Anne does not remember the first day she lay eyes on him. In fact, she can hardly remember the structure of his voice or the way his hands felt when they wrapped around hers. No – she only remembers the sound of his laugh and the music that would play in the back of her mind. Carnival music. The sound of merry-go-rounds and games…

But with every divine rise of jubilant organ trills and upbeat fiddles, Anne would only be reminded of the love game she made him play. They both lost.

She was the type of girl who liked people for herself – that is, she would form connections with people who would let her drown in the blissful music of human connection until she became deaf to the hurt she inflicted. She collected people like she collected records, and the most beautiful sounding of relationships she would add to her collection.

The boys she collected never stayed in her mind. She would have to seek music in other people until she was able to find it herself.

It was the summer of 2003, her third year of university, when she added yet another boy to her steadily growing collection of failed relationships. This boy was not particularly interesting, at first; she was only dating him for the car he drove and for the dates he took her on. Both of which made her become lost in the carnival music of make believe.

He was nice, she thought at the time.

She remembers the kind eyes, the soft hands. The jackets of his she wore, the daffodils he bought her, and the cologne he seemed to bathe in. How every time he thought she would break up with him he would get this look of accepting the inevitable – how his brows would furrow slightly and the smallest of sighs would escape from his tired lungs. Tired. She now realizes she made him tired. Tired of waiting to be cast away like the long line of other collector’s items.

When carnival music started to replace the broken beats of her heart, even long after she cast him and his symphony away, she realized she must have loved this boy.

Other days she built a soundproof wall around her chest in an attempt to get rid of the nagging music streaming into her ears – to get rid of all the feelings she had and the regrets that came with them. The feelings made her think about what could have been if she hadn’t broken every violin string between them in the name of adding a masterful sonata to her collection of brokenness.

Here, now, at the age of 31, Anne sits at a splotchy bench watching her daughter line up at a Ferris wheel that must have been 50 years old. She remembers it here, and she remembers the car that he drove to take her here, 14 years ago. The Beethoven that played over the car stereo as she thought about leaving him.

She looks over at the ride where they shared their first kiss and wonders what his lips look like now. The ride that goes backward with a high pitched wail was the last ride they rode before Anne broke up with him – too afraid of the unfamiliar song that moved to the rhythm of her palpitating heart.

Occasionally, in between watching her daughter and their friends, Anne would snatch a glimpse at the ride, viewing empty seats and hearing no familiar hum of the machinery or the carnival music.  It seemed to scream the past to her – beckoning her to it with a silhouette of the boy she once loved in the seat near the front. She could see his bare feet sticking out from the edge of the car, almost beckoning to her, saying, “Look at how you left me.”

She stood up and started toward the figure of the past, but something in her brain told her to sit back down. Her heart was performing a dislocation, of sorts – wanting to run toward what once was and being hindered by both logic and the knowledge that the past was behind her.

There it was again, she could hear it. The only song she remembered from her collection – a jumbled mess of organ notes and violin strings, coming together to make a beautiful and broken masterpiece that hammered her heart and shattered her skull.

Suddenly, she was cut from her reverie and the image of the bare feet by her daughter:

Anne shut off the carnival music playing in her head and peeled her eyes away from the figure lying lazily in the car of the abandoned ride.

As she grasped the shoulder of her 13-year-old daughter and started to turn in the opposite direction, her daughter turned her gaze toward what her mother had been looking at and noticed the abandoned ride.

“Who is that? He  keeps staring at you.”

Anne looked over at the carcass of metal and locked her eyes with a kind pair of a stranger’s.  He had his right hand wrapped around a bouquet of daffodils and was leaning beside a blonde woman around Anne’s age who was tending to a toddler. The man locked eyes with Anne, looked at the abandoned ride, and disappeared into the crowd with the blonde. Her breath hitched with the sight of a leather jacket and the faraway sound of a Beethoven symphony laugh.

Anne turned away from the ride, and passed a rugged sign that read “THIS RIDE IS OUT OF SERVICE.” In spite of herself, she hummed a slight carnival tune, but it sounded somber and mournful. Eventually, she forgot the notes to the song as her daughter began explaining how her friend Sarah had ruined her day by refusing to share her game tickets.

As the exit to the amusement park neared, Anne found it got harder and harder to remember what song had been stuck in her head. Perhaps she would look through her record collection when she got home to find another song to replay over and over in her mind.

She would have to find something without organs and fiddles, she thinks.

THEME STATEMENT: How an individual – when confronted with a past uncertainty or regret – will ignore the uncertainty for the sake of the future.