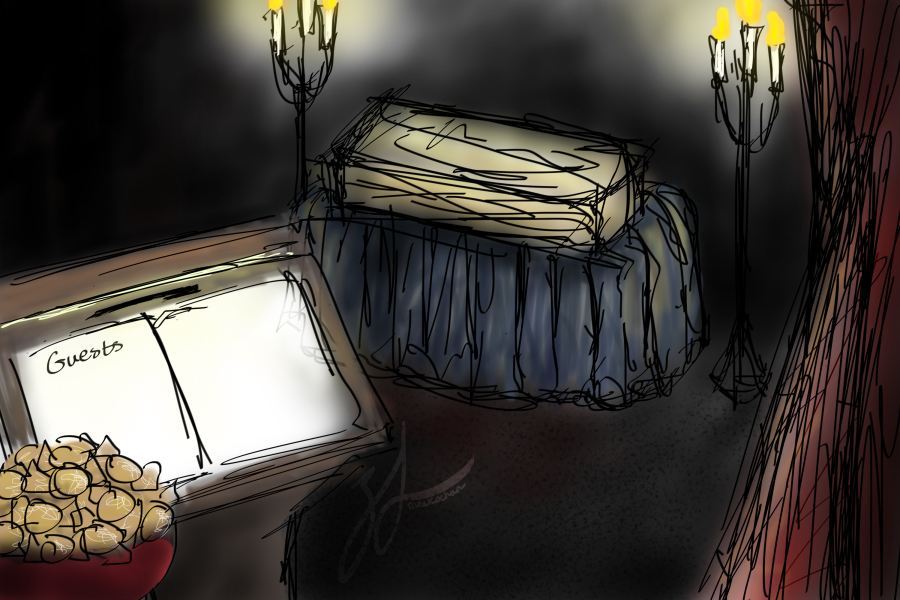 Discuss the ideas developed by the text creator in your chosen text about the ways in which individuals take responsibility for themselves or others.

One becomes blind to the consequences of the actions they take when striving to achieve a goal, sacrificing the responsibility for their actions for a strengthened resolution, often incurring more losses trying to achieve the goal than the goal can ever restore. The Great Gatsby, by F Scott Fitzgerald tells the story of James Gatz, or as his new name would have him be, Jay Gatsby, who spends a large fraction of his life pursuing fortune, fame, and power, all for the purpose of impressing and winning back his long time item of affection, Daisy. Throughout this journey, however, Gatsby loses sight of his identity and his morality in pursuit of a goal, whose true value has been forgotten underneath the layers of romanticization and cognitive self-deception. Because of this, Gatsby loses touch with his responsibilities, and becomes unable to see through to the consequences of his actions. This viscous trap of irresponsibility is something that anyone can fall victim to, and even despite the fact that Gatsby’s story may be hyperbole, it doesn’t make the emotions that cause this irresponsibility any less of a threat to anyone capable of experiencing them.

Gatsby and his money, identity, and past life: The loss of his responsibility

Gatsby was born James Gatz before he became a millionaire, a name that elicits much less eccentricity and mystery than his chosen name. This name change represents a lot more than Gatsby’s commitment to winning back Daisy. Namely the sacrifice of his past life, his identity, and all that they entail. To change your name, in many cultures, is seen as dishonourable or disrespectful, and is a choice that is most frowned upon. In most cases, particularly in Italian cultures, changing your name can indicate you are unproud of your family heritage, and careless of the sacrifices and the history that your family name carries. It is seen as a sign of disrespect and disassociation. In Gatsby’s case, the changing of his name indicates the same disassociation, only in his case, it is a disassociation from himself, and thus a disassociation from the restrictions, relationships, rituals, and responsibilities of his old life. Gatsby, in changing his name, (and more importantly, his identity) makes clear that his intentions are not to win back Daisy by improving himself, but by simply becoming someone new. Someone who isn’t James Gatz. By doing that, Gatsby frees himself from the responsibilities of himself as Gatsby, and of James Gatz. From everything to his millions of dollars in ill-gotten gains, his dishonesty, his entitlement, his ignorance when it comes to the nature of Old and New Money, Gatsby does anything but show responsibility for his actions or his identity throughout this book, and that sense of impunity is what allows him to take the risks he does in this book without a second thought. He’s lied to himself so much that those lies have become truth, and Gatsby is the form that those lies take. Anyone is capable of this disassociation if they’re given a strong enough goal; the kind of goal that feeds on the strongest emotions and most cherished past experiences. These goals aren’t goals, they’re dreams, the antithesis of goals, and they’re harmful.

The romanticization of his relationship with Daisy: the justification of his irresponsibility

One must ask the question, what kind of a relationship would you sacrifice your life, identity, responsibility, and individuality for? What kind of a relationship would drive you to work for years and years and years just to win back? Love is certainly a very strong, encompassing, and devastating emotion, but it does most of its most important fostering within the mind, not through actual physical contact or time spent together. Not everything is as good as you remember it, and your mind usually isolates the good memories over the bad memories. This can explain why not once is it mentioned if Gatsby ever had a doubt as to if what he was doing was worth it or not. What if Daisy was dead? What if Daisy has moved on? What if she lost interest? Found someone else? If she cared, she never would have left him in the first place, right? These are all reasonable concerns, however, they are concerns that Gatsby as far as we know, for better or worse, never considered. This is because in his mind, Daisy was his no matter what. He glorified his relationship with Daisy to the point where he let it consume his identity, his morality, and his entire future; and if he could do that, why couldn’t Daisy do the same? This idea, this fabrication almost, is what keeps him on his journey of recklessness, selfishness and irresponsibility. It’s an unfortunate clause that makes the human psyche turn itself inside out. It’s the same thing that keeps (some) abusive relationships from ending: the romanticization of the time spent with the other person, remembering the best parts of the other person and neglecting to learn from the worst parts. It’s this cognitive romanticization that drives a person to do things they wouldn’t otherwise be capable of. Love on its own is an incredibly powerful emotion on its own. It’s the reason there exists so many cheesy (and not so cheesy) songs and poems and films and literature about love and loss, because it’s one of the most powerful emotions humans experience and it’s something that no matter how much artwork is dedicated to depicting it, cannot be understood until it is experienced. Given an emotion as powerful as this, coupled with the over-cognitive nature of the human psyche, it’s not too far-fetched to believe that Gatsby would have the motivation to accomplish all he did and let go of who he used to be. If he can do it, who’s to say no one else can?

Gatsby’s recklessness/entitlement: The consequences of his irresponsibility

Having considered all the factors that have allowed Gatsby to become who he ultimately ended up being, we can only observe the consequences that Gatsby’s insistence on cheating responsibility have on him and the people around him, and how those same factors can lead to real life consequences for regular, real, non-fictional, people. Gatsby, in his irresponsible fervor, loses not only his identity, his morality, and his own reliable memory, but also something more irreplaceable. Gatsby loses his humanity. It would be easy to state all the mistakes and pain Gatsby’s loss of responsibility has caused him, even the ones that lead to his own death, but to focus on those would ignore the unique consequence that Gatsby, by building his life on falsehoods and fabrications, created for himself. Gatsby suffers a consequence more inherently tragic than any he could have suffered as James Gatz: Gatsby suffers oblivion, the loss of his humanity. It is often said that the dead receive more flowers than the living, because regret is more powerful than gratitude. But often regret comes hand in hand with loss, and the fact that no one seemed to care or was willing to care about Gatsby’s death goes to show that Gatsby had nothing to offer anyone as a human. During Chapter Nine, Nick takes it upon himself to gather those who care about Gatsby and send them word of his passing. He tries Meyer Wolfsheim, Gatsby’s link to the world of crime and a mentor to him in a way, and informs him that Gatsby will be having a funeral. Despite everything, Meyer Wolfsheim, presumably crestfallen, explains in a letter to Nick why he won’t be able to attend Gatsby’s funeral. Later that afternoon when Gatsby’s phone rings, Nick answers. Upon telling the speaker that Gatsby is dead, the speaker hangs up. Gatsby’s death was published in the News Paper, and Gatsby’s father was among the few people who actually attended Gatsby’s funeral, and even he seemed more eager to go through Gatsby’s belongings than he was to mourn his death. Despite the impact Gatsby’s actions seemed to have on the people and the perceived identity he had created for himself — the parties he threw that were regarded as legendary, the reputation he built as a man of few words — none of that mattered for the simple fact that no one cared about him. No one knew him, no one spoke to him, no  one valued his company, and no one really cared to pursue any of it. Gatsby failed to take responsibility for his own humanity, and he drew the gratitude of no one, thus his death carried with it very little loss to anyone, because he gave them very little to lose. A more esoteric consequence, but one that is devastating in its own right. Few people will mourn Gatsby , few people will miss Gatsby, and even fewer will even remember him. Gatsby spent years throwing himself away, chasing all the wrong goals in all the wrong ways for all the wrong reasons, to achieve an objective he didn’t remember, only to end up with nothing, not even his own identity, to keep him company. This is the ultimate consequence of Gatsby’s loss irresponsibility: oblivion.

What separates Humans from the Animal Kingdom is our distinct ability to be conscious, and to be cognitive to a point where unlike any other being on the planet, it can be harmful to us. We choose to let go of our responsibilities and put our ambitions and aspirations above our identity, all while bending reality to our favour and blinding ourselves of the consequences. Gatsby can be seen as a tale of perseverance or foolishness depending on how one is to look at it. The story of Gatsby’s journey from rags to riches can be seen as either inspirational or disheartening, his quest to win back Daisy — romantic, or obsessive. When one sees the story through the lens of today’s values, and what is accepted as normal in today’s culture, Gatsby’s actions are selfish, ludicrous, and obsessive. Gatsby loses his identity, and his responsibilities in the process of reshaping his identity around someone who may or may not even love him. But just because his loss of identity and disassociation to the responsibilities of that identity is not practical, does not make the factors that allowed his corruption any less real, nor any less harmful. It is important that one remains aware of their emotions, and do everything in their power to keep themselves from losing touch with their responsibilities, because when they do, they suffer irrevocably the cost of their identity, and suffer further the consequence of oblivion.

2 thoughts on “Wealth, Prosperity, Love, and Responsibility… and Several Other Terrible Things from The Great Gatsby: Polished Critical”