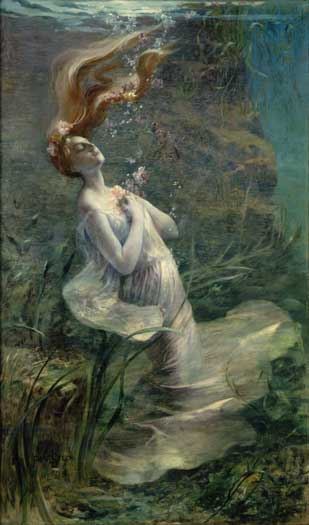 Honour is seen as an abstract concept of where an individual obtains recognition of their actions. For instance, a man who brings honour to his family name is recognized. With honour comes the absolute assurance of one’s own recognition; in other words, certainty. Honour and certainty are interlocked in the sense that one quality will lead to the other based off of an individual’s decisions. In the restoration of honour and the desire to fulfill them, one can find certainty in life, and perhaps develop as an individual. However, in the medieval times, how could a woman, who had no will of her own, balance between honour and certainty? When honour is dependent on another individual, one lacks the ability to find certainty in life. This is explored in Shakespeare’s play, Hamlet, through the character of Ophelia. As a woman, the conventional concept that the father’s word in undeniable, results in contradictory roles Ophelia must play. Ophelia is the epitome of innocence in her family’s eyes, and she must grow to be the dutiful wife and abiding mother. However, her Renaissance sense of love for Hamlet distorts her purpose to fulfil the honour her father expects of her, along with the uncertainty that comes with a relationship with Hamlet. Through the character of Ophelia, Shakespeare demonstrates that with the inability of an individual to make their own decisions, one will be crushed under the strain of expectations, and will therefore take desperate measures to deal with both honour and certainty. The consequence of an unstable purpose is shown through Ophelia’s dependence on others, her reaction to independence, and the shift in her sense of self that follows.

As a woman in the medieval era, Ophelia is a character whose fate lies in the hands of the men around her, and whose only purpose is to bring honour to her family. In her father’s and brother’s eyes, she is the eternal virgin, the vessel whose purpose is to be a dutiful wife and abiding mother. She is a shell of a human being where her own will is nonexistent and the absoluteness of her father’s words rules her entirely. Shakespeare uses the characters of Polonius and Laertes as a way to suggest Ophelia’s dependence on others. She is dependent in the sense that options are merely a false illusion; they were never presented before her, as she needs only to obey the men around her. She knows nothing about the world, and that suggests the idea that a dependent individual is easily swayed because of the lack of control one has over making decisions. This is demonstrated in the quote,  “I do not know, my lord, what I should think.” (1.3. 591) Ophelia says this in reply to Polonius’s warning about Hamlet. The quote suggests her struggle with restoring her honour, as she formally addresses her father, not wanting to become a disgrace to her family. Because of her social standing as a woman, Ophelia would not be allowed to voice her opinion, much less reject the warning offered by Polonius. The societal concept that a father’s word is undeniable haunts Ophelia, and she therefore can offer no resistance to her father’s words. For an individual, their family is often a defining part of their identity, and Ophelia is no different. Because of Ophelia’s constant desire to  please and certify the honour her father and brother hold over her (as it was her only purpose that was expected of her), Polonius instructs Ophelia to distance herself from Hamlet. At the same time, Laertes uses her honour and her trust in him as leverage to control her loyalties. It is at this point in the story when Ophelia’s dependence is most apparent and begins to define her. Every action she takes is to fulfil the purpose Polonius provides her; illustrating how dependence, when taken to the extreme, can quickly consume and dominates one’s mind. Essentially, the possibility of obtaining the honour expected of her justifies Ophelia’s existence, causing her purpose to be defined only by the people around her. The author employs this idea to express how the restoration of honour can become the only way for an individual to recognize themselves. Her brother’s immediate warnings against Hamlet’s love also contributed to the formation of Ophelia’s dependence, since she could not reflect on her own state of being without the reliant on their opinions. As a result of the dependence they inspired, Ophelia’s honour is flawed. Ophelia allowed herself to accept their warnings and stays the choice-less existence she was expected to be. That is to say, the idea that an individual may lose the ability to make decisions for themselves is reliant on a family’s expectations that clouds an individual’s will.

All of Ophelia’s certainty is shattered when Hamlet kills Polonius behind the tapestry. The certainty of which relies on the security of her father, Polonius. With the death of Polonius, Ophelia is left with the uncertainty of her being, as she no longer has the familiar purpose of obeying her father. This is demonstrated by the quote,  “There’s rosemary, that’s for remembrance; pray, love, remember: and there is pansies. that’s for thoughts.” (4.5. 3053)  The passing of Polonius collapses the certainty Ophelia had built through the reliance on others.  The insanity Ophelia displays stems from her lack of experience with independence, which leaves her vulnerable to the uncertainty of her future. Her father was once the epitome of her honour; the concept where a father’s word is absolute no longer governs her. The disappearance of her purpose hurt her severely, so she began to cultivate an insane behaviour due to the lack of authority, or rather, certainty over her life. From here, Ophelia has lost her previous existence. Before, she was a choiceless, dependent being, but now she is left with the uncertainty of choice. She no longer has someone to make a decision for her, and the appearance of options prove too much for her to handle. Her inability to make decisions is demonstrated by Ophelia’s lack of characterization of herself; she never admits to wanting anything – she only follows other people’s decisions. This means that she has no sort of personal identity or independence that she develops for herself. She is a character who lacks development and depth beyond that which is provided by other characters. She is merely a body painted by the influence of others with no will of her own. By using this element, Shakespeare depicts how a dependent individual may choose to indulge in insane behaviour in an attempt to reconcile the relation between their honour and certainty. If it were not for Polonius’s death, Ophelia’s pursuit of honour would have remained stagnant, and continued to rely heavily on other people’s words.

In Ophelia’s desperation to restore honour and certainty, the author demonstrates the negative impacts of the lack of independence an individual may possess. With the uncertainty of her future, Ophelia has no means with which to restore balance and sanity within herself. In the line where Gertrude tells Laertes that Ophelia has drowned, “There with fantastic garlands did she come/Of crow-flowers, nettles, daisies, and long purples,”  (4.7. 3317) the flowers she has holds much significance. She drowns covered in crow flowers, which represents her childishness at not being able to make decisions. Perhaps her childishness also led her to escape the uncertainty of her world through death. Her inability to make decisions means she is unable to bring a sense of certainty in her life, and as a result, reconciling honour and certainty is impossible. Consequently, she drowns in a brook with the too heavy burdens of uncertainty.  It is also significant that Ophelia drowns near a weeping willow, a tree that symbolizes forsaken love. Her love for Hamlet was to never be reciprocated, and with the death of her father, she can no longer fulfil her previous purpose to obtain honour for her family name. Independence is needed for an individual to develop. However, her reliance on those around her proves that she is unable to grow, and she therefore remains stagnant in her pursuit of honour and certainty. In other words, Ophelia, who was unable to restore certainty and honour in her life, chose to easily end her suffering, symbolized by the nettles, through death, which exemplifies the weakness that come with dependence. Through Ophelia’s decision to end her pain, Shakespeare demonstrates that when a dependent individual no longer has someone to rely on, it leaves them to struggle with restoring certainty in their lives, and therefore leads them to take desperate measures to deal with the lack of security over their future.

An individual whose purpose was to only follow the expectations presented to them is unable to deal with the uncertainty that comes with making decisions. This is demonstrated in Shakespeare’s play, Hamlet, through the character of Ophelia. As a dependent existence, she is caught between her father’s and brother’s restrictive instructions and Hamlet’s crushing demands. With the sudden appearance of choice, Ophelia is unable to reconcile both honour and certainty, and thus, has no alternative but to throw herself into the river to drown. The idea that a choiceless individual with crushing expectations will take desperate measures to restore honour and certainty is explored through Ophelia’s dependence on others, the appearance of choice, and the inability to reconcile honour and certainty.