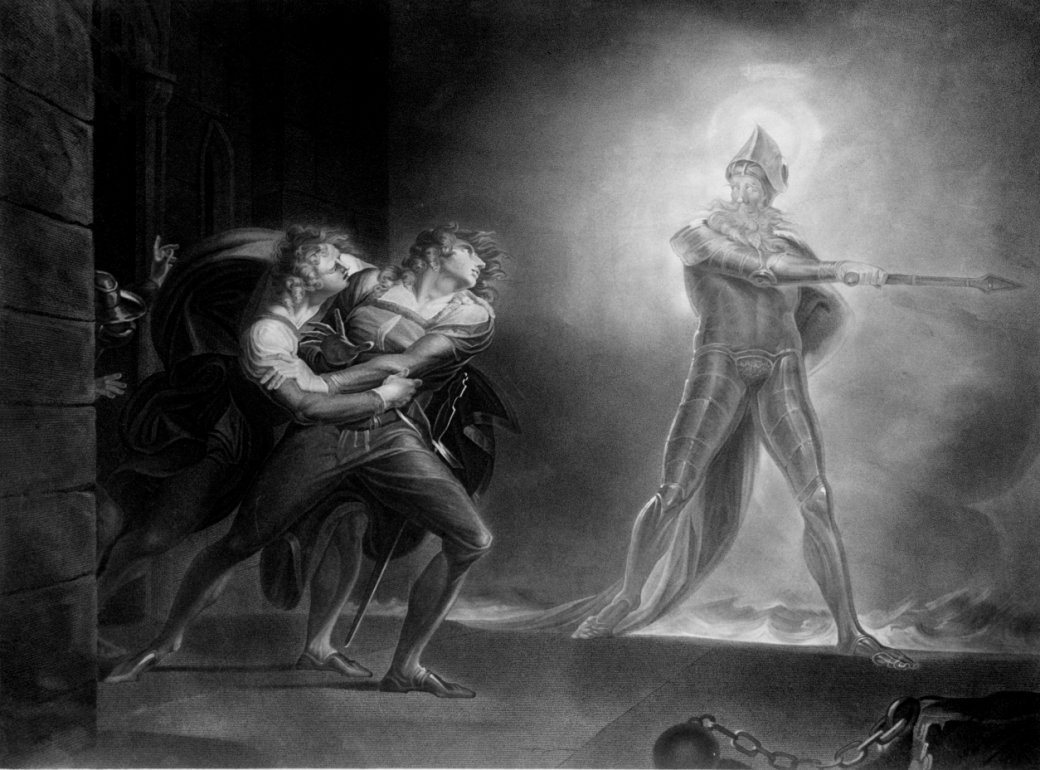 Prompt: Discuss the ideas developed by the text creator in your chosen text about the ways in which individuals struggle to restore honour and certainty.

“Purpose is but the Slave to the Memory”: Death and the Desire to Restore One’s Honour and Certainty

“There is always another day tomorrow”; this is a manifestation of a belief individuals convince themselves of when faced with conflicts that, while important, cannot be resolved in the moment. Oftentimes, these issues are related to the restoration of lost honour—such as the desire to regain one’s pride after an embarrassment—or the longing to restore one’s sense of security in their own life—in other words, the reestablishment of one’s sense of certainty. Death may seem to be the least permeable barrier to the fulfilment of such an aspiration, and yet even the dead may have enough influence—through the power of their legacy—to have the living act on their behalf; thus, the living may act as a conduit for a deceased person’s desire to restore honour and certainty. In the state of powerlessness an individual is in after death, they cannot control the actions of the living to the extent that they may wish to, so they must contend with others’ interpretations of their desires, amplifying the sense of uncertainty in the restoration of honour. This is what occurs in William Shakespeare’s The Tragedy of Hamlet, Prince of Denmark; the ghost of old King Hamlet uses his son as a channel to avenge his death; Hamlet’s failure to act, however, causes the old king to be trapped in a sense of uncertainty for much of the play. The extent of his impact on Hamlet’s actions demonstrates that when an individual has influence over those capable of action, they may inspire others to act even when said individual is powerless to restore honour and certainty themselves. In other words, the potency of one’s influence over others may be the factor that allows for the reclaiming of one’s sense of honour and certainty. Despite his inability to take direct action, the ghost’s struggle is ultimately met with success because of the strength of his influence over Hamlet.

The memory of old King Hamlet is immediately shown to be that of a powerful, honourable war king; before his death, he had certainty in his own position and power, demonstrating how one’s perception of their own previous sense of certainty impacts the strength of their desire to restore honour. That is to say, one requires the memory of honour to desire the recovery of their past sense of certainty—this creates a dichotomy between the past ideal and the present, which, in turn, provokes a desire to act. The ghost’s desire to regain certainty is shown when he tells Hamlet about the circumstances surrounding his death, when he says that “Upon [his] secure hour [Claudius] stole” (1.5 61) the crown and his honour, essentially depriving him of the certainty he had in his power while he was alive. Shakespeare uses old Hamlet’s loss of security to reveal how death generates uncertainty; after one is dead, they no longer have direct influence over how they will be remembered. The lack of control, combined with the loss of honour caused by suffering in death after losing the throne “by a brother’s hand” (1.5 74), awakens the desire for peace within the ghost. The yearning is further amplified by the sudden nature of his death; he was “Of life, of crown, of queen, at once dispatch’d:/Cut off even in the blossoms of [his] sin” (1.5 75-76), showing how past wrongdoings against him—culminating in the loss of his honour—dominate the old king’s mind even while in purgatory, a stark contrast to the “valiant Hamlet” (1.1 4) he was while alive. Because his death is irreversible and resulted in the collapse of his sense of certainty, old Hamlet is haunted by his inability to make peace with the reality of his existence. This idea is further developed by his status as a purgatorial ghost; he cannot move on until “the foul crimes done in [his] days of nature/Are burnt and purged away” (1.5 12-13); until then, he is “Doom’d for a certain term to walk the night” (1.5 10), which suggests uncertainty because he is confined to a transitional state, rather than one of permanence—thus suggesting a sense of restlessness in his psyche. These elements are used by Shakespeare to illustrate the correlation between powerlessness and uncertainty; when old Hamlet was alive, he had control over his fate, and thus a sense of certainty. Death rendered him essentially powerless—and though he struggles with the desire for the restoration of his honour, death acts as an impediment, preventing him from being able to act independently. His desire to restore certainty, however, is not deterred by the realization of his own powerlessness; rather, it causes him to resort to utilizing his influence as a means of regaining his honour and certainty.

Old king Hamlet, realizing the power of his influence, chooses his son to carry the burden of restoring honour for him—the plan itself, however, is a cause of uncertainty because of its dependence on the connection between the ghost and Hamlet. To prevent the possible deterioration of his strategy, the ghost exploits Hamlet’s emotions by saying that “if [he] didst ever [his] dear father love” (1.5 23) he would “Revenge his foul and most unnatural murther” (1.5 25). By stipulating that a willingness to avenge him is proof of love, he capitalizes on Hamlet’s devotion to the memory of his father. This connection is further reinforced by the fact that the ghost speaks only to Hamlet—their similarity in perspective makes Hamlet the ideal vehicle to carry out revenge as he is the most likely to care for the restoration of his father’s legacy. Hamlet himself reinforces this commitment to remember his father when he says “Remember thee!/Ay, thou poor ghost, whiles memory holds a seat/In this distracted globe.” (1.5 95-97) Hamlet’s restatement of his dedication demonstrates how individuals may take it upon themselves to restore the honour and certainty of one they perceive as dependent, especially if taking action will preserve the memories of the powerless person. In other words, the apparition’s technique is effective because Hamlet is invested in the restoration of his father’s honour. The ghost is aware of this, and his decision to approach Hamlet and ask for revenge—when he tells Hamlet “to revenge, when [he] shalt hear” (1.5 8)—can be attributed to the sense of empowerment the ghost receives through the awareness of his ability to manipulate Hamlet’s emotions. Rather than simply being consumed by the sense of helplessness and uncertainty that may initially occur after losing power, through old king Hamlet’s resolve Shakespeare depicts how a sense of strength—of influence—can begin to restore certainty. Though the ghost can not regain the copious amount of power he had while alive, death has made him invulnerable to the physical consequences of the indirect means through which he attempts to restore his honour—he can not be harmed by the repercussions of revenge, unlike Hamlet, so his son should “Pity [him] not” (1.5 5) because of the security he has from beyond the grave. Although death provides certainty in this sense, the dead only hold as much authority as the strength of their impression in the minds of the living; a spirit can not take direct action to regain their honour, which may cause issues with the specifics of the act—in this case, with the speed of the restoration.

Hamlet’s inability to take decisive action to restore his father’s honour, from the perspective of the ghost, allows the “royal bed of Denmark [to] be/A couch for luxury and damned incest” (1.5 82-83) for much longer than need be; the lack of certainty created by the inaction incentivizes the ghost to attempt to alter the situation in his favour by appearing before Hamlet. The ghost’s second visitation “is but to whet [Hamlet’s] almost blunted purpose” (3.4 111); he has returned to reinforce the importance of Hamlet’s commitment because, although the ghost has taken action through his influence, he is entirely dependent on Hamlet’s promise for the fulfilment of the physical element of revenging his murder. This illustrates the disadvantage of being unable to act on one’s own; reliance on another can become a source of uncertainty if actions are not carried out as they were intended. By returning to reprimand Hamlet for his inaction, the ghost is able to harness Hamlet’s feeling of guilt at being unable to perform “Th’ important acting of [his] dread command” (3.4 109), which provides Hamlet with additional impetus to hastily carry out revenge—this hurried approach contrasts significantly with the extended planning inherent to Hamlet’s condition. The attempt to adjust Hamlet’s views on the urgency of the reclamation of his honour, rather than work in tandem with them as the ghost had initially, demonstrates how a sense of desperation may set into an individual when they rely on another for the restoration of honour and certainty; because there is a discrepancy in the perceived urgency of the task between him and Hamlet, the ghost seeks to burden Hamlet further as a final attempt to influence the recovery of his honour. Thus, Shakespeare demonstrates how involving an outside influence on the restoration of one’s own honour can be an obstruction to the achievement of the goal if one does not have a strong enough influence over said person. To overcome this, the old Hamlet appears in his nightgown, “A king of shreds and patches” (3.4 103), to evoke Hamlet’s memory and reinforce the importance of Hamlet’s objective in relation to their bond as father and son. This proves to be effective—with Hamlet immediately responding to the ghost’s command to tend to his mother—because Hamlet’s sense of belief in the apparition has increased to commitment after witnessing Claudius’ guilt at the play. A sense of devotion is shown to be crucial for the indirect restoration of honour and certainty because, when an individual lacks it, they may be unable to take meaningful action to honour their cause. For Hamlet, the old king’s words cause an important emotional shift in his sense of duty—giving him a true sense of purpose—ultimately leading him to take revenge.

The ghost is able to restore his honour and certainty because of Hamlet’s devotion to his father’s memory—despite the old king being incapacitated, his ability to manipulate Hamlet’s actions to his advantage results in the avenging of his murder, giving him peace. William Shakespeare uses this element of The Tragedy of Hamlet, Prince of Denmark to demonstrate that when a person lacks the means to take direct action to restore honour and certainty, the potency of their influence over others may be enough to cause those capable of doing so to act on their behalf. Therefore, an individual is shown to continue having a lasting impact through their memory, even after death. Though death may seem to be an insurmountable barrier to the restoration of one’s sense of honour and certainty, particularly when death can be perceived as a cause for the loss of security, one’s deceased status can reinforce the importance of the memory of said individual in the minds of the living. The living derive their purpose from their memories; thus, a death can become the motivation that leads to restoring of honour and certainty, rather than the inhibiting factor.

3 thoughts on ““Purpose is but the Slave to the Memory”: Death and the Desire to Restore One’s Honour and Certainty (Hamlet Critical Essay)”