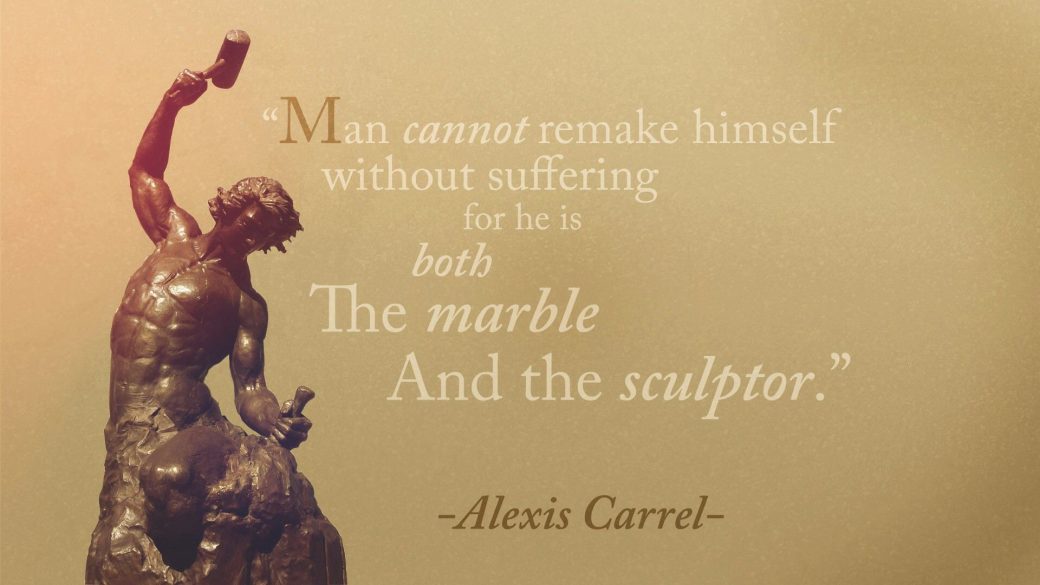 I would like to begin this post with a heartfelt thank you for those who contributed and challenged me on the last post. Your thoughts were deeply appreciated and gave me something to think about. I hope I can get more of you to follow suit and find enough value in these works that you find something worth talking about. Thank you.

I spoke at length in my last post about the existence of Evil and why I fear it so. I thought for a while about what this post should focus on and it was then that life offered me inspiration.

As many of you know I am dating an incredibly talented, intelligent and beautiful young woman in your class who recently helped me understand the value of suffering in one’s life, so I want to thank her for helping me see clearer and have something worth sharing.

Suffering is an inherent part of the human experience. It is an inevitable outcome of our natural fragility and mortality in the face of an unapologetic world. This is only aggravated by the increasingly complex and socially dynamic world we now live in, linked by technology and timetables that force us to see time as a vital commodity that we have frustratingly little of. There are small, daily sufferings: missing the bus, spilling your coffee, failing an assignment. But there are sufferings that are much greater, often the ones we feel more befitting the use of the word: the death of a close family member, the pangs of unrequited love, failing to get into the university of our dreams.

So how then do we approach suffering? How do we justify our lives when it is often only moments of happiness in a sea of suffering?

The Buddhists had a fascinating claim: the cause of your suffering is the illusory self.[1]You suffer because you have come to believe your conceptions of self and the world as true. A refusal to disengage your experience from any sense of spiritual truth will keep one trapped in the circle of birth and death. Consider what this means. Initially it seems contradictory to modern scientific practice, which holds observation as the highest form of truth, where the Buddhist practice seeks to disengage oneself from the conceptions derived through experience. However, this is not true. Because Buddhism speaks of conception, not observation. In fact, the practice of meditation is meant to deepen an understanding of what actually is by silent self-reflection and awareness. Thy ask us to follow suit of science, but observe what actually is without the bias of our emotionally driven self-protective mechanisms.

So what does this have to do with suffering? I have come to believe that the only way to combat suffering is to face our burdens forthrightly. To lay our heavy stones upon our back and walk them up the mountain voluntarily and with pride. This conclusion has been drawn after considering two parameters of suffering deeply.

First, when we accept that suffering is an inherent part of life, we stop suffering needlessly to a great internal degree. This is because so much of our suffering is self-attack. Why am I so sad? Why is everything so hard for me? Why is everyone else getting along so easily? What’s wrong with me? Now one mustn’t approach the acceptance with a defeatist attitude. We are not bowing our head so that we can gladly snivel across existence complaining about everything because “life sucks” We are instead humbling ourselves by accepting that we experience suffering just as everyone else and there is no shame in it. We liberate ourselves from fear of suffering because we face it eye to eye and reduce it from its pedestal to a mundane experience.

This brings me to my second claim. One must bear their suffering forthrightly. Because suffering is an inevitability we should not be shaken by its occurrence. Instead, we should analyze and drink from it the full cup of knowledge it offers us. Here the Buddhist philosophy is useful, because it allows us to view the metaphysic of our situation: why do you suffer? What is the reality behind your suffering? Often, we see our suffering as the result of some trivial phenomenon, like a snoozed alarm clock, or procrastinating for finals, or calling back an ex. But these are actions born of some far deeper truths that extend down to our character and the way we carry ourselves in this world. When we confront the truth behind the truths it is often a seemingly cruel reason, but when we entrust that we are capable of bearing the burdens and see them not as punishments, but incubators of a higher self we walk into a transformative paradigm. So, a snoozed alarm clock reveals a passionless career, a procrastinated test reveals fear of failure and calling back an ex reveals an unwillingness to accept your suffering as your own fault. Acceptance allows us to no longer run from fear of suffering, but will God to lay his heaviest burdens upon us so that we may grow.

I’ve been reading Viktor Frankl’s account of the Nazi concentration camps in his book “Man’s Search for Meaning” and I found an answer to a question I posed last article. I asked how one find justification for suffering when the very concept of value is consciously destroyed. Frankl’s response is devastatingly simple and yet deeply profound.

You simply refuse to accept the notion of value-less existence. Simply refuse.

Frankl argues that value is a choice and therefore, until they can invade your mind one will always have the ability to derive value in life, no matter how small the actual deriving factor. One may find the entire justification of life laid out in a simple morning sunrise even if during that sunrise they are burying the bodies of children who were starved to death.

So what does this have to do with Evil? I believe that if we can strengthen ourselves by accepting our suffering forthrightly, we begin to directly combat Evil in our own souls. Evil looks to grasp our hearts by ways of latching onto our suffering to make us resentful and angry. Resent is undoubtedly one of the strongest predictors of malevolence, as it justifies our manifestations of Evil as revenge against the conditions of existence. If we are to combat Evil, then we must begin by controlling our own capacity for Evil, not by running and locking it away but by staring into its grandeur unaffectedly.

In conclusion, I want to say that I realize this is all beautiful to say and think about, but far far harder to act out in our own worlds. But I have ventured for this series to be an applicable think tank as opposed to an academic conversation. So, I ask you, what other choice do we truly have? Should we go on to suffer, accepting our existence as sub-self-beings, never truly knowing our full potential because we are bound to our suffering as a shield behind which we hide our inadequacies. Or can we muster the moral courage to face our suffering and accept it, walking on in the world with pride and faith in self, taking steps to become the highest versions of ourselves. Because when we decide to accept our suffering, our awareness suddenly makes us privy to the fact that it is only through our suffering that we can become something greater. Soon we will ask for it voluntarily. We will ask for heavier stones to carry, for they strengthen our back. Harsher roads to walk, for they callous our feet. And when we begin to love our suffering, we become protective of it, choosing what is worth suffering for, eliminating consciously all roads that do not serve us and ending the cycle of endless suffering.

So there remains only one question.

Where will you start? Which stone will you take responsibility for first? Perhaps it is a mere pebble. Start by cleaning your room every day. Better yet, start by making your bed every morning.

If we want to fix the world, I believe that we start by taking responsibility for ourselves.

[1] I would like to clarify that I am by no means even near a proficient understanding of Buddhism. I realize the epistemologists of the Buddhist sect were just that, a distinct group, but Buddhism as a whole derives its foundational beliefs in the search for the truth that removes suffering, so I stand by my claim.