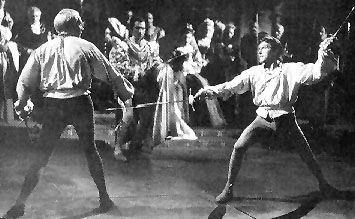 And for that purpose I’ll anoint my sword.

I bought an unction of a mountebank,

So mortal that, but dip a knife in it,

Where it draws blood no cataplasm so rare,

Collected from all simples that have virtue

Under the moon, can save the thing from death

That is but scratched withal. I’ll touch my point

With this contagion, that if I gall him slightly

It may be death.”

Laertes. The son of Polonius and brother to Ophelia, this character foil for Hamlet finds himself involved in his own quest for the restoration of his honor and certainty. Though the play’s namesake usually “takes center stage”, if you will, the character of Laertes is often neglected and simply acknowledged, despite having just as much motivation, if not more, than Hamlet. Despite having similar forces driving the restoration of honor and certainty, Laertes possesses one quality that makes his character much more fitting: we see love in his family, and we see it destroyed by none other than the titular Hamlet. This is important, as we can better understand the before and after, as well as the cause and effect of Laertes throughout his appearances in the play. To restore his honor after having his father so mercilessly murdered, he will avenge Polonius. Uncertainty is found in Hamlet’s “affection” for Ophelia, thus Laertes warns her before his departure. With Hamlet’s death, he can restore the certainty that no others would befall the same fate as Ophelia and Polonius by the hands of the mad Prince of Denmark. We also see this in his revealing of Claudius’s attempt to poison Hamlet, where in his dying breaths he helps the very man he wanted to murder. For when an individual is the sole cause for another’s loss of honour and certainty, the victim will seek to restore said qualities and ultimately reinstate themselves through the death of the perpetrator. However, in the presence of defeat, one who has regained their honor and certainty may choose to assist those in the pursuit of their own lost qualities. 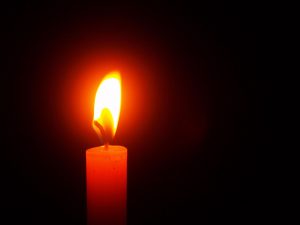 This image depicts the nature of Laertes: fiery and full of energy when ignited. However, flames have a habit, when given enough fuel to burn, of burning brightly for a moment, but then sizzling out, as the flame has consumed itself. In the play, Laertes’ story arc is very similar to this, as when he is fueled by the loss of honor and certainty, he decides to fight Hamlet in a duel. Unfortunately, this duel is what is his undoing, and Laertes fiery nature inadvertantly kills him. In the end, the flame is restored to a calmer and more natural state; similarly, Laertes, upon his death, returns to a more honorable and certain individual. In the image, the flame and the candle are the only things visible. This is representative of how blinding the desire to restore his honor and certainty was for Laertes, as his better judgement was haphazardly ignored, leading to his own demise. After the flame in the image burns out, all that would remain would be darkness. With Laertes death, as well as the extinguishing of all other characters, the play concludes, and all the audience is left with is the feeling of the unknown, similar to darkness.

“Honor the space between no longer and not yet.” – Nancy Levin

The  quote (left) demonstrates the interplay between honor and certainty of an individual. The quote implies that the past and the future are both irrelevant in relation to honor, and that only the present is important. In one’s life, the only time that one may have certainty is in the present, as the future is a mystery and the past is irreversible. The concept of honor in the quote perhaps alludes to how fragile the quality is against such a fleeting concept like time. This can be related to the ways in which Laertes tries to restore honor and certainty in the play. Laertes is an impulsive go-getter, acting and thinking in the present and ongoing events. By losing his honor with the death of his father and sister, he also loses his certainty by focusing on now past events. By shifting his focus back to the current issue of Hamlet, and plotting his death, Laertes’ certainty has the potential to return. In fact, it is not until his own demise that Laertes finds said certainty; one’s death only takes place in the present for them. The honor he lost is also restored as he acts in the moment, where he not only kills Hamlet, but also redeems himself by telling of the King’s plot to poison him.

From the previous two creative pieces shown, it is evident that Laertes did succeed before his death in restoring the honor and certainty he believed he lost. However, that’s not to say this aspiration was not all beneficial, as it did lead to the untimely demise of the character. From his standpoint, it could be said that it was plain circumstance that had led to his death; however, it is evident that had Laertes not channeled his motivation for redemption into a lust for revenge, he may have survived the story. His redemption of honor and certainty did not entirely see fruition in the original manner he sought out to pursue. He may have killed Hamlet, thus avenging his father, sister, and his honor. He may have thus restored the certainty that no harm shall befall those in Hamlet’s wake and that his deceased family could rest easy. However, seeing as how these actions were misconstrued with vengeance, it puts into question if this really retained what he lost. Subjectively, to him, as an individual with his own personal perception, this may be true, but the act where he sets aside his vengeance and helps Hamlet by exposing Claudius plays a major role in the restoration of honor and certainty. By acting based acceptance, and not just vengeance, one may better restore honor and certainty into their own life.

I’ll admit that honor and certainty definitely do not present themselves in my life the same heroic and dramatic way they appear in the story of Hamlet. However, that’s not to say I have not encountered circumstances where the restoration of these two qualities has been at the forefront of my percieved responsibilities. Like Laertes, it is not until I have experienced a loss or degradation of my own self worth, and thus my own honor, that I would find it necessary to redeem myself. Furthermore, in the loss of my honor, I also lose certainty in the outcome of my own future, leading to emotional dismay and stress.

As a high school student, I am more than well acquainted with the fact that individuals seek to belittle and dishonor those they believe have wronged them. Growing up in an age and environment where anonymity through technology is ever-present, this concept is always prevalent in my life. Unfortunately, I have found myself on both sides, where I have dishonored and been dishonored myself. Much like Laertes, it is not until I have received a loss in honor and certainty, that I will seek restoration. Often times, this restoration is obtained through retribution; thus is human nature. Laertes sought to redeem what he had lost through violence directed towards Hamlet, as the Prince had wronged him with the murders of his family. I had sought the same thing due to the slandering of my name, and thus a loss in the honor others saw in me, as well as my own certainty for what was to come in my own future. The manner in which I sought restoration would have ended in the same way as Laertes and Hamlet: both members ultimately destroying themselves. Thus, despite what I had lost, I chose not to pursue retribution, and instead, found new qualities in myself that brought about a new, restored sense of honor.

I have also faced a loss of honor and certainty after my family became less affluent, and money become less expendable. In society, wealth determines status, as individuals value materialism over all else; thus, classes and status as we know it today came about. I saw it as not only a loss of honor, but a loss of certainty, as I did not know if my materialists desires could be sustained. Thus, I took it upon myself to pursue an occupation. Laertes occupied himself with the idea that harm towards those who have wronged would redeem himself, however, this ended with his own death. In order for my redemption, I had to work harder and push myself, not others, in order to achieve my desire of restoration.

In Hamlet, the protagonist and his character foil, Laertes, both struggle with the adversity of restoring their lost honor and certainty. It is through their acts of revenge that they seek to accomplish said restoration; however, there is irony in their goals. Laertes ends up killing Hamlet, yet Hamlet also kills Laertes. Shakespeare is trying to convey not only the futility of revenge-fueled redemption, but also how the manner in which one restores their honor and certainty is subjective to each individual, allowing for conflict of interest. In the former claim, Laertes demonstrates said futility as he makes Hamlet the villain in his eyes. In his blind quest for restoration through revenge, he faces mortal consequences as his enemy is driven by the same goal. Through revenge, an individual runs the risk of harming either themselves or those who are not involved. Laertes, after agreeing to the use of poison in a duel, falls on his own blade, and ultimately kills himself, blinded by the consequences of using such a volatile toxin until his final moments. It is important to note, however, that Laertes does, in a way, restore his honor and certainty, as he tells Hamlet of Claudius’s poisonous plot thus restoring honor, and in his death his certainty of never having to succumb to Hamlet’s actions is also restored. The latter statement about conflicting ways in which individuals seek this restoration of honor and certainty holds true as we see that Laertes is driven by his quest during the dual, while Hamlet is very much the same. Both of these characters are caught in a fatal conflict that would indeed end in one of their lives being lost; however, because of their parallel aspirations, both characters tragically die, succeeding in what they had set out to accomplish, but not living long enough to see the complete consequences of their actions.

Honor and certainty play a significant role in defining and justifying the actions of an individual, especially when these two qualities have been lost. In a situation where a specific individual is deemed responsible for this loss, one with seek out to enact vengeance upon the perpetrator. This holds true in Shakespeare’s Hamlet, as through the character of Laertes, the audience is given the perspective of an individual who loses his honor and certainty, and resorts to violence to reclaim it. Despite it costing his life, this venture did redeem Laertes in his eyes. In his blindness for revenge, he did not see the possible consequences for his actions, and jeopardized his whole ideal for restoration. As a society, we are cultivated to find a common enemy to place our losses on. In doing so, we may succeed in redemption of our honor and certainty, but we lose the very binding force of our humanity in the process. When we learn to accept and forgive, an individual may not only find themselves more honorable, but also more certain of the path they must walk in life to achieve their desires.