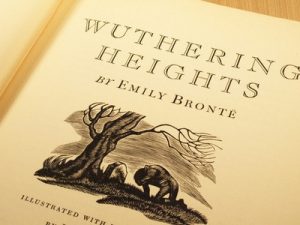 The following is both my response to Wuthering Heights and my ‘representation’ of my perspective and what I have learned from reading the novel. I’ve written it with a critique’s eye, as though it were a book review.

I’m going to be honest; I am indeed a lover of literature, and was an avid reader as a child. As I’ve gotten older, I’ve had less and less time dedicated to my passion for reading, however I still like to think of myself as a hardcore reader.

I am telling the truth when I say that it has been a long time since I have read a book that I have been fully immersed and invested in–I’d say the last time I was in love with a novel was a little over a year ago, when I read ‘A Streetcar Named Desire’ by my love, Tennessee Williams. Since then I have failed to find a book to fill the hole in my heart–quite a horrid fate for one who loves to read so dearly, yet is unable to due to the fact that nothing seems interesting anymore. Such was the  case when I read ‘Wuthering Heights’ by Emily Bronte.

Now, the thing is, I never thought I’d dislike a book as much as ‘A Catcher In The Rye’, or ‘The Crucible’, or even perhaps ‘Twilight’. After reading ‘Wuthering Heights’, I’m sad to say that it is probably one of my least favourite books that I have ever read in my whole sixteen years of existing.

Now, let me begin by saying that I was actually quite excited to read this book, because of all the hype that surrounds ‘Wuthering Heights’ from it’s die-hard fans. It is acclaimed to be one of the greatest romance stories of all time–a testament to passion and the destruction that comes from a love that burns too bright. So, please believe me when I say that I went into this novel with an open mind and an eager heart; I was truly ready to be swept off of my feet by the broodingly attractive Heathcliff, who I had heard so much about, and I was more than happy to cry with dear Catherine over her undying love for him.

These dreams were quickly slapped out of my head from the very first sentence(s):

“I have just returned from a visit to my landlord – the solitary neighbour that I shall be troubled with. This is certainly a beautiful country! In all England, I do not believe that I could have fixed on a situation so completely removed from the stir of society.”

After reading that, I quickly realized that this novel was not going to be all I had hoped and dreamed it to be.

So. With that terribly dull opening plaguing both your heart and mine, let us begin on an abysmal adventure as I relate to you my long and tedious journey of reading ‘Wuthering Heights’;

Firstly, I would like to say that I was tasked with reading this book in two days, (which was my own fault, really.) which would have been quite a feat, had I pulled it off. To this day, as I sit here begrudgingly typing away on my laptop, listening to my Amy Winehouse ‘Back to Black’ record, I can firmly say that I have yet to finish this book. There are about 15 pages left to read, but I truly can’t bring myself to do it. Bearing this in mind, I would like to gently suggest that this time limit I put on my reading process may have contributed to my dissatisfaction with the book. But only a little.

I would like to begin by saying that I was initially very invested in Heathcliff’s character. Call me predictable, but something about his tempestuous nature and dark and brooding attitude had me very enraptured with him. I guess every girl does like a bad boy. But, I digress. So, as the story went on, I naturally sympathized with Heathcliff’s sense of abandonment, and felt for him in Hindley’s abuse of him and such. I felt as though the concept of him being ‘lesser’ than others in terms of social class interesting, because he is continually referred to as ‘dark’ of skin, or very ‘gypsy’-like, which is not only a reflection of his outward appearance, but also of who he was as a person. It didn’t seem to matter to society how horrible one was on the inside, as long as they were fair of skin and hair and whatnot they were able to move up in the social hierarchy.

Such is the case with Hindley; despite being quite a rotten person on the inside (as we saw in his treatment of Heathcliff, and later on with his son, Hareton), he was able to move up in the ranks of society and marry a lovely wife, due to his outward appearance and heritage. This, of course, all came crashing down around him when his wife died and he took to alcohol to drown his grief. But, nonetheless. It was interesting to see the shallowness of society reflected in this novel time an again, as was the case over and over with Heathcliff, in his inability to marry Catherine due to his status and lack of wealth.

I found, despite my initial adoration of Heathcliff, that as the novel went on, I was always waiting for him to become the hero I thought he was capable of being. I felt as though he had this special charm about him, that he was actually soft on the inside, and had built walls because of the world’s harshness. I felt for sure that Catherine would be able to break those walls down and reveal inside the hero that I knew Heathcliff to be. And so I waited. And waited. And waited. And, nothing.

When Catherine finally died, I felt for sure that Heathcliff would come through–that he’d be the man that Catherine and I both knew he was capable of being. But, boy, were we both wrong. After Catherine’s death he only became more and more unforgiving, strutting through his life with a chip on his shoulder more than ever because the love of his life was so cruelly snatched from his grasp. His malevolence proved to be too much for him to overthrow, as we saw in his torture of Isabella, which he himself describes as being ‘sadistic’ and ‘for his own pleasure.’

Consequently, as the novel progressed, I found myself hating Heathcliff more and more. He seems to grow unessicarily spiteful and distasteful in his cruelty, like when he took Linton away from his uncle Edgar and cousin Cathy–he had no intention of loving his son the way he had ought to be loved. It was all a ploy, in my opinion, to get revenge on Edgar for marrying Catherine, which didn’t make sense to me because he was the one who left in the first place, which forced Catherine to move on. (Kind of.) But then there is the whole idea that Heathcliff isn’t getting revenge on Edgar because he married Catherine, but rather he is power-hungry for he has been deprived of status for so long that he needs others to feel small in order for him to feel big. Such could be the case when Heathcliff makes sure that Linton and young Catherine get married, so that Edgar’s property becomes his by default.

I just found Heathcliff’s character to be disappointing because he wasn’t the romantic that I wanted to be, and he couldn’t get out of his own head enough to become the hero he should have been.

To shift gears slightly, I found that I very much disliked Catherine right from the beginning, but was confused by this dislike for as she neared her death, I found myself warming to her a little more. Perhaps this was Edgar’s influence on her, for he was the only character in the book that was good through and through. But nonetheless, I generally didn’t like her on a whole.

I think my biggest dispute with the novel was that I didn’t really find it to be a romance, at least not between Catherine and Heathcliff, because nothing even happened between the two of them. I found it to be unnecessarily melodramatic concerning the ‘greatness’ of their ‘love’, because more than half of the novel is a greed for power and land, in terms of Wuthering Heights and Thrushcross Grange.

While I enjoyed the second generation’s story more, I was just generally very bored with it.

That said, I did find the contrasts between the two different households (Wuthering Heights and Thrushcross Grange) to be very clever. For example, ‘wuthering’ means blustery and turbulent, and often describes feirce and roaring winds. By extension, ‘Wuthering Heights’ literally is an embodiment of the fact that it’s inhabitants’ turbulent emotions know no bounds. In contrast, a thrush is a small songbird, so ‘Thrushcross Grange’ speaks to the more soft gentle things in life, and by extension, the gentle manners of it’s inhabitants.

Likewise, Heathcliff and Edgar are contrasted, for where Heathcliff is cruel, Edgar is kind. I think that this could be interesting when you take Catherine into consideration, for she is divided into two parts; one side of her loves Heathcliff, and the other loves Edgar. One could argue that this is why she ends up living in both households while she is alive–part of her is harsh, and cruel, and selfish like Heathcliff, while the other part of her longs for compassion, and softness, and comfort like that which she finds in Edgar. Unfortunately, however, these contrasts weren’t enough to make the book enjoyable, at least in my opinion.

So, to conclude, I didn’t like this book, in case you couldn’t tell. And, who knows? Perhaps I will read this at another point in my life and love it. (It’s unlikely, but I might as well throw the notion out there.)

2 thoughts on “Response to Wuthering Heights”