Perhaps others may disagree with my perspective, but after rea 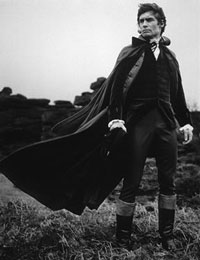 ding Emily Brontë’s novel Wuthering Heights, I as a reader found Heathcliff to be an extremely admirable character. Though my reasons for doing so may be due to my slight inability to comprehend emotions, I do believe that the ostracized character of Heathcliff is one that represents overall beauty and strength.

I am a selective individual, and so, I tend to live cautiously. I am selective when it comes to the relationships I make, the clothes I wear, the music I listen to, and even the fights I partake in. In general, I may be described as careful, or perhaps even “afraid” of chances in life, and so when I feel comfortable with the situations that I am in, I tend to over indulge in that comfort. I feel as though that is a similar characteristic that Heathcliff and I share. Heathcliff’s character, in many aspects, is quite similar to me as a person, and while I cannot say that I am quite as malicious, I would say that I am just as devoted. Like Heathcliff’s undying love for Catherine – his passion –  I too share that same love for own passions: acting, singing, family, and close friends, and so when both Heathcliff and I unfortunately lost people in our lives who we loved (for different reasons of course), I found that there was a certain reliability that came with our shared devotion to our passions, especially in these times of loss. For Heathcliff, he became all passionate for Catherine, and when he lost her, he drove away those who surrounded him in the form of hatred; after the recent passing of my grandmother, I drove people away in the form of silence. This recent experience made it apparent to me that icing out individuals is how I choose to respond to hardship. I cannot say that it is something I am overly proud of, but after reading this novel I asked myself, why shouldn’t I be?

My adoration of such a hateful character such as Heathcliff simply stemmed from the profound experience of empathizing and understanding a character I knew I I could never be. I adored Heathcliff’s rage, and I was almost envious of it, because I knew in my heart that I as person would never be able to react in the ways he did, and yet I could completely understand why he would. At the same time, I felt powerful. I took pride in the fact that unlike Heathcliff, I could diffuse situations. I could bottle my emotions and I could cope internally, and for the first time, I didn’t feel ashamed of that. I admired his dedication towards Catherine, because behind all of it’s layers, they were acts of love. I appreciated how much Heathcliff respected Catherine, to the extent that he would go to extreme lengths to try to be successful for her. I understand some may say that it isn’t wise to live your lives for other people, but I believe that when they mean enough to you, doing those things is for ultimately for yourself as well, because of the love you posses. Whether you chose to do so safely or destructively is completely up to you, but the reasons for doing so is due to something as simple as love, and I admire the overall simplicity that comes with that. In all honesty, if it meant being with my grandmother for just a little bit longer, I would most certainly devote just as much for her as Heathcliff did for Catherine. Lastly, as strange as it may be, I truly appreciated how Heathcliff was so selective. It has always been difficult for me, and for those in my life, to understand why I am the way that I am. It isn’t that I don’t trust people, it’s just that I really don’t like telling everyone all of my business, and truthfully that has caused some problems for me, but that’s just who I am. Reading about Heathcliff and seeing someone else with a mindset similar to mine was comforting, and despite his wrong doings, I found myself growing so invested in his character because I felt connected him, and as mentioned, for me those connections that I find are few and far between.

I will admit that perhaps I should reconsider my coping mechanisms when it comes to hardships in life, but after reading Wuthering Heights, I felt like I didn’t have to. I thanked Heathcliff for being so outright and vocal, and for being so angry, because then I didn’t need to be. I experienced a great catharsis when reading this novel because it was almost as though his character was able to take out my anger for me, and so, I felt free to comfortably dwell in silence in my own life when it came to my own grieving and coping with recent tragedy. I understand that this may not make sense to those who are not in my head, and so there were people who worried about me after my grandmother’s passing, and they politely alluded to the idea of choosing other ways to grieve, but to me the way I was doing so made perfect sense. Heathcliff and I were bonded as one; he the fire, and I the ice, and together we worked, so that by the end of the novel, and in my own life, I was able to face my emotions in the form of a steam that drifted into an air of acceptance. It was the acceptance of myself, and the acceptance of the events that I had endured. Accepting the nature of my own demeanour was what brought peace, and I can say with growing certainty that I am going to be ok in due time, and so while the ghost of Heathcliff walked the Moors with his beloved Catherine, I was finally able to sleep at night, and was able to smile upon my hardships.

I have realized, that life is about perspective, and what my recent experiences have taught me is that, sometimes a shift of perspective is what is needed to better understand and appreciate one’s life. In the beginning, I loathed Heathcliff, but though the experience of my own tragedy, my own shift in perspective allowed for me to appreciate things differently, and thus love Heathcliff, due to both our similarities snd our differences. Life is precious, and I have learned to appreciate what I have, rather than dwell over what I do not, and the character of Heathcliff helped me while I experienced changes in life, ultimately leading to this shift of perspective that has left me for the better.

4 thoughts on “To Love The Man They Loathe: A Perspective”