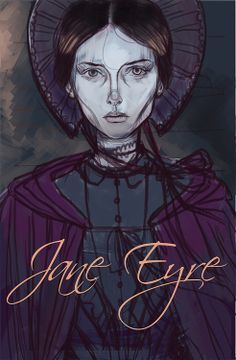 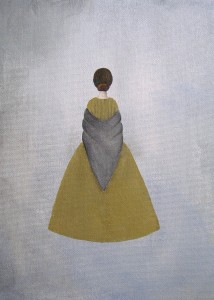 ut the novel, considered a distinct being; even with the social expectations that were attached to class and gender, her unconventional worldview prevented her full integration into regular society. Despite being marginalized and stereotyped by those higher up on the social ladder because of her lack of status and economic power, Jane is able to overcome her circumstances and achieve happiness.

Jane is first maligned by the Reeds and the staff at her home in Gateshead. Because she is a poor orphan who will not inherit any money (and therefore, it is unlikely that someone of a higher status will marry her), her aunt and cousins consider her to be of a lower class. Jane’s appearance reinforces the sense of alienation she feels; her cousin Georgiana is favoured by the servants because of her “long curls and blue eyes” as well as her “sweet colour” (22). This bias introduces the idea that Jane is unrelatable because of her lack of physical beauty; since she is different, she experiences a lack of pity from those around her. Jane is also considered lower than the servants of the house as she does not work for her keep; the lack of love Jane experiences contributes to her sense of isolation, which in turn fuels her frustration. She feels wronged because others say that she should feel indebted to Mrs. Reed while simultaneously bearing the contempt with which she is treated because of her poverty. Although Jane’s alienation influences her sense of justice, she is unable to change her socioeconomic status. Jane is essentially powerless at Gateshead; the mistreatment she faces is used by Charlotte Brontë to create a sense of empathy within the reader.

Mrs. Reed’s decision to put her charge in a charity school is reflective of her view on Jane’s social status; charity schools were meant for the poor, and usually only provided a basic level of education – not enough to pursue a career that would cause major changes to social standing. The pupils at Lowood school are cold, starving, fighting diseases and forced to live under the scrutiny of Mr. Brocklehurst, who is portrayed as a hypocrite. Jane is isolated and  humiliated by Brocklehurst when he accuses her of lying; he is able to demean her easily because of his superior social standing. The girls at Lowood are vulnerable because they are orphaned – a school catering to students with influential parents would have been held accountable for the treatment of the pupils. Mr. Brocklehurst’s double standard is seen in his over 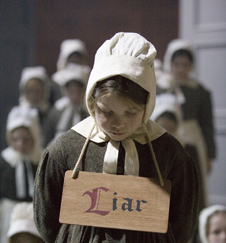 all expectations for the girls as well; he expects them to “humble” by eating burnt porridge and leaving their hair unbraided, while his own daughters are “splendidly attired in velvet, silks and furs.” (65) This disparity in his treatment develops the idea that those of a low social standing are inferior to the rich, and therefore, the poor must live an unindulgent life. In this case, the students at Lowood are the “other” – because their struggle is not understood by Brocklehurst or his family, they are discriminated against. Jane’s education does empower her in some ways – by going to school, she gains the skills necessary to become a teacher at Lowood. Nevertheless, she is still sustained by her employer – her livelihood depends on her job.

Jane continues to be marginalized during her time at Tho 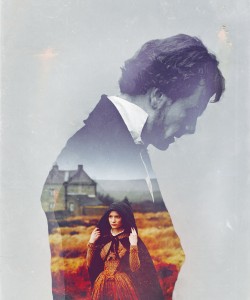 rnfield; Blanche Ingram openly declares her dislike of governesses and insults Jane. She is a foil to Jane – though she is beautiful and of high birth, Miss Ingram is also superficial. Mr. Rochester is aware of Blanche’s avaricious nature so he does not marry her, and instead proposes to Jane. When Jane agrees to marry him, she gains an opportunity to change her status; however, she would still be a dependant, which threatened the class order of the period. Rochester’s willingness to marry someone below him socially was unconventional; he wished to do so because he appreciated Jane’s character. He knew that Jane is unusual; she is different from the other women he has encountered, so his reason for marrying her contrasts sharply with his motive for marrying Bertha Mason. Bertha is the true “other” within the novel; though she was well off, her Creole blood meant that she would never be seen on equal terms with an English woman – she did not have the same status, was unable to work (due to her insanity) and divorce was considered a social taboo at the time. Similar to Jane’s relation with Mrs. Reed, Bertha had no choice but to rely on Rochester; the only escape from the confines of society – for her, at least – was suicide.

After Jane leaves Rochester, she spends a period of time unemployed and in poverty. This is Jane’s return to being socially and economically powerless; she is, once again, poor and obscure. When she finds the Rivers family, she is able to feel a sense of belonging. Her job as a teacher provides her with autonomy, and the sense of alienation she felt before is replaced with companionship; Jane finds people who care for her. The fact that Diana and Mary are also governesses makes them more relatable to Jane – the Rivers are also considered outsiders of society because they do not have an inheritance, and therefore, must work, making them a member of the same class as her. Jane’s transformation into an independent individual is complete when she receives her uncle’s fortune; it is at this point in the novel that she gains status. When she returns to Rochester, Jane has (arguably) more power within the relationship as she has wealth, security, and freedom, while Mr. Rochester is dependent on her.

Though Jane’s rejection of the expectations of her class and gender resulted in her isolation through much of the novel, she is able to move up on the social ladder and obtain economic independence. Jane finds her escape from the pressures of society in her marriage; because she is an equal to her partner, she is able to live happily. Ultimately, the ending of Jane Eyre suggests that one who does not bend to class or gender prejudices will eventually find fulfillment. 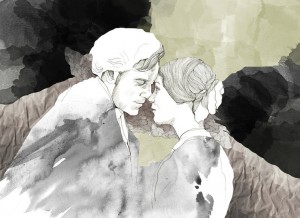