The following is a quotation analysis that addresses different aspects of the quotation in each paragraph, as the excerpt is fairly lengthy. In addition, this is one of my favourite quotes in the entire novel, so I tend to relate it to other scenarios and phrases present throughout the text.

“My great miseries in this world have been Heathcliff’s miseries, and I watched and felt each from the beginning: my great 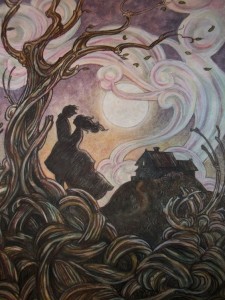 thought in living is himself. If all else perished, and he remained, I should still continue to be; and if all else remained, and he were annihilated, the universe would turn to a mighty stranger: I should not seem a part of it… Nelly, I am Heathcliff! He’s always, always in my mind: not as a pleasure, any more than I am always a pleasure to myself, but as my own being (72).”
― Emily Brontë, Wuthering Heights

The above quotation was spoken by Catherine Earnshaw during her conversation with Nelly regarding Edgar Linton and Heathcliff. However, the quote as a whole focusses more directly on the way Catherine views Heathcliff, or in other words, the way they compliment each other. That being said, it is interesting to note how Emily Bronte chooses to describe Heathcliff not as a lover, but rather an anchor that allows Catherine to “seem part of [the world].” One that allows her to feel the “great miseries” both of them have shared, and enables her to exist after “all else [perishes] and he [remains].” Therein, the only thing Catherine needs to exist is Heathcliff, otherwise she is non-existent. Similarly, one might argue that without Heathcliff all would become unfamiliar, in the sense that, “If all else remained and he were annihilated, the universe would turn to a mighty stranger.” This serves to further prove that he is the familiar presence that makes Catherine’s existence palpable; he makes her feel alive. To make another feel alive is a broad concept, however, in this novel it means that Heathcliff makes Catherine feel part of this world.

Furthermore, at the beginning of the quotation, Bronte utilizes specific diction to target the emotional state of the characters; more specifically through, “Great miseries”. Not moments of happiness nor grief. Simply miseries. When Catherine mentions her miseries being Heathcliff’s miseries, she is linking his presence to her emotional state. That being said, misery is a form of suffering. When one’s miseries are similar to those of another, they are connected to that person through the broken parts of themselves, therein making hat connection that much more valuable. Therefore, Bronte is portraying that Catherine and Heathcliff are in tune from an emotional standpoint as well, therein contributing to the overall theme of oneness between both characters.

It is as though Bronte created two characters from a single character. They feel the same pains, exist only if the other exists, to the degree that Catherine states “I am Heathcliff!” This supports the elusive idea of origin. It is as though Bronte is trying to communicate to her audience that lovers share the same origin; they are crafted from the same entity. That being said, readers often debate that the relationship Catherine and Heathcliff have is that of obsession, not love. I disagree. It only seems like obsession because of the setting and time frame. More specifically, one only has a single lifetime on this earth, and by finding another soul of the same origin as themselves in such a limited amount of time, one has accomplished a magnificent feat. You have found someone of your kind. Someone who understands you at a level no previous soul has. Therefore, obsession may appear to be the case, but in reality it is a reaction to the realization of origin that both Catherine and Heathcliff are responding to. Furthermore, this illusion of obsession is based on the isolated nature of the setting. The moors are a fairly desolate setting in which there is limited human interaction, and therefore it seems likely that if a man of different etiquette and background suddenly becomes part of a young girl’s life, she would become fond of him. Or, in other words, obsessed. All in all, obsession is a temporary state of infatuation and, in my opinion, what is presented in this novel is not of that obsessive nature, but rather a powerful form of love rooted in origin, that one becomes desperate to hold on to.

Furthermore, Catherine had always loved Heathcliff regardless of his status and background, to the degree that she openly associates with him to a servant: Nelly. In fact, mere association is not what Catherine is doing, for she is describing him as her “own being.” In my humble opinion, that is not an obsession but rather a realization on Catherine’s part: “Whatever our souls are made of, his and mine are the same.” Such a realization (even though it is not directly present in the quotation above) serves to justify that Catherine has realized that both her and Heathcliff are of the same origin. 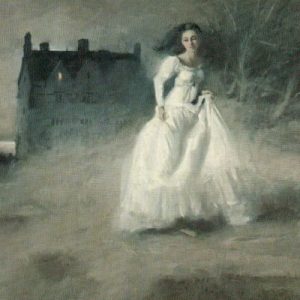 All in all, the love within this novel encompasses an idea that is often overlooked: that such a love exists in which we are bound to another soul,  due to the simple fact that both souls are of the same origin.

One thought on “Obsession? – Absolutely Not.”