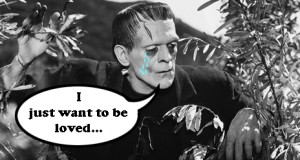 While Victor Frankenstein was creating the monster, he gave the creature a functioning mind, which had the capabilities of thinking and storing thoughts. By analyzing Victor’s compulsive thoughts and actions, we have a better understanding of his personality. Victor’s life is primarily ruled by science and other people’s opinions.

Once the monster was created, it was a way out for Victor’s compulsive wishes and actions.  Victor was scared that he created something so horrific, a duplicate of himself.

Victor ultimately caused the ruin of his closest friends and family, and eventually his own life. Most of the events that occurred were all repercussions of his irresponsible behavior.  First of all, Victor decides to create a monster, not taking any responsibility for it.  He then isolated himself from the world, causing his creation to roam around and leaving him unattended and neglected.  You show the monster no love and didn’t even have the nerve to teach him a thing of two and you just left him.  Apparently, you don’t understand the meaning of responsibility. The least you could have done is provide for him, and then allow his mind to adjust for world exploration, as any parent would do for a child.

The monster will obviously want to get revenge.  Although he killed Victor’s loved ones it was his own fault. Due to a lack of companionship, love and physical contact with humans, the monster had no respect.  Thus, the killings could have been avoided, and instead he could have been of great help to people everywhere.

Victor could have been known for much more rather than a heartless person if he was smart and expanded his knowledge for the good of the people. For example; if he actually resurrected people from the dead, no one would ever have to experience the pain of losing a loved one.  Additionally, Victor could have further implemented more species and be well-known.  His selfishness succeeded all other great values he possessed.

5 thoughts on “Victor Frankenstein and the Monster”