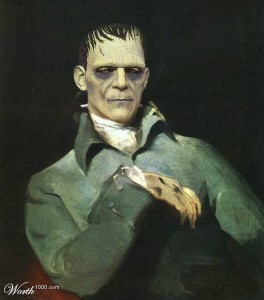 While reading Frankenstein, one can hear echoes of Milton’s Paradise Lost. The connections between it and Frankenstein are important and explain the human condition present in the novel. It is said to be as one puts it, a cautionary tale. This is my first time reading it, and to be clear, I was a little weary of reading it, for mostly everyone told me it was not an “exciting of a novel”. However, when reading Mary Shelley’s Frankenstein, I thoroughly enjoyed it, I experienced agitation, and anger when the monster would do something immoral, yet felt pity for the experience the monster went through. I personally enjoyed the novel and respect it as well. Sure, the beginning with Walton’s letters was a bit boring, however once I got into it, I could not put it down (hence me finishing it in one weekend).

Milton’s Paradise Lost written in 1667, is an epic poem about God, Satan, Adam, and Eve. It is a tale about the fall of men, innocence, and the war between both Satan and God. When first introduced to Adam and Eve, they were given limited knowledge, and were living in a state of naivety.

The poem is a story on both Adam and Eve, the first man and women created. It is about how they were created and how they came to lose their place in the Garden of Eden, also called Paradise. It starts with Satan tricking an angel named Uriel, who stands as a Guard of Eden. Satan then enters the Garden of Eden, soon finding Adam and Eve, and becomes jealous of them. Satan then overhears them speak of not being allowed to eat the fruit from tree of knowledge. Uriel, then warns Gabriel, another Guard of Eden, and soon Satan is banished from the paradise.

Lucifer then comes back to the Garden of Eden disguised as a snake, and induces Eve to eat the fruit. After having eaten the fruit, Eve convinces Adam that he should as well. He is dedicated to her, and eats the fruit as well, for he much rather have to share her fate rather than be left without her. The guardian angels, sad for the failure of man, come down to judge the sinners. They are punished and can no longer live in the perfect world of the Garden of Eden.

Men would have to struggle and sweat for their existence. Women would have to bear children in pain and be ruled over by their husbands. Adam and Eve are then thrown out of the Garden of Eden, forever.

Much like the monster, Adam and Eve are the first of their creation. They lived their life, without knowledge and live in a blissful world. It also tells the story of rebellion and punishment of Satan against God. The aim of this poem is “to justify the ways of God is to men”.

Victor Frankenstein played the role of God, much like Satan, both were swayed by their thirst for forbidden knowledge. Victor believing himself as superior, set standards which were higher than his human limitations, and takes it upon himself to play god. He in the end, did not contribute to any scientific advancement, but destroyed his family and much like Satan, filled the world with evil fantasies. After Satan had committed his crime he was banished for his actions, much like Victor in how he isolates himself from society, slowly losing his status and is considered a madman.

Victor’s behavior has some similarity with Eve as well; both Eve and Victor were persuaded by their curiosity and temptation to seek in a pursuit which led to their downfall. Victor with his pursuit of knowledge, and Eve when she was persuaded to eat the fruit from the forbidden tree.

In the novel Frankenstein, once the monster learned how to speak, he reads Paradise Lost. Through the knowledge he gained, he drew parallels to his existence and Adam and Eve. Consequently, the burden of his existence grew larger, and brought more grief to his being. Both Adam and Eve, like the monster, had a lust for knowledge which led to their loss of innocence. By reading Paradise Lost it intensified the monster’s feelings of self-pity and hatred of the human race. He believed that his misery was worse than Adam and Eve. The monster noticed that both Adam and Satan had their companions to talk to, comparatively to the monster where he is all alone. In the end both Adam and the monster blamed their creators for their fallen conditions,

When comparing Satan and the monster one cannot help but notice both Satan and the monster defied their creators. Satan wanted to be god, so he rebels against God, and the monster takes his revenge and destroying Victor’s family. Satan was once god’s most magnificent angel, and the monster was once a compassionate creature.
The story Paradise Lost, goes hand in hand with Mary Shelley’s Frankenstein, the epic poem displays the idea that knowledge can be one’s downfall if not learned with care and affection.

2 thoughts on “Paradise Lost and Frankenstien”