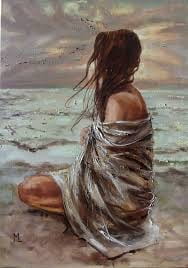 you would tell me i was beautiful

you would gently brush my curls back

and whisper sweet nothings in to my ear

fire would spread across my face

and you would laugh at the red glow it brought

i would scrunch my nose in protest of your teasing

which would urge you to plant kisses on my forehead

you would pull away slowly

taking my breath with you

i would melt as your chocolate eyes bore into mine

a moment of silence would pass

then you would smile

you would promise me you would change

and i would believe you

he hadn’t arrived home yet so i decided to walk to the beach. i drifted down the street, where vendors still squawked at wide eyed

tourists and stray dogs sniffed through mounds of the days undesired delicacies.  a gentle breeze rustled through my curls and my

heart leapt as i stepped in to the cooling sand. the waves crashed against the shore, shooting salt water into my eyes. over the sea,

the sun was setting, gold and violet painted underneath the wispy clouds. i pulled my dress over my head and dipped my toes in. it

was nights like these when i dreamed i was a mermaid, swimming down into the depths of the atlantic. i waded further, feeling

the tide calling my name. yasmine.

but, much like before, i resisted temptation, i resisted freedom. tears filled my eyes as i made my way back to the shore. by this

time, the sky had become dark, not even a star glimmered in the black. it was a short distance back to the house, but still fear

clung to me like the sand on my feet. it was not because of the lonely fishermen, who lurked around the corners waiting for their

evening catch, or the thieves, armed with knives, counting out the days spoils on the curbs. and this fear grew with every step i

took towards the blue door at the end of block. there was silence as i entered. i breathed out a sigh of relief, but stopped dead in

my tracks when i walked into the kitchen. he sat at the table, his eyes red and glazed over, the scent of tequila wafting off his

breath. with in seconds, he had me up against the wall, painfully kissing and squeezing wherever he desired. my body tensed with

each touch, and my breath felt caught in my throat. i kept offering myself figments of comfort in the form of thought. he is just

despite the small spark of hope i ignited in myself, the feelings of fear and disgust still ripped into me as he ripped open my

clothes. i fought the impulse to scream. i refused to do that again. instead, i closed my eyes. but a tear cascaded down my cheek

and dropped on to his hand, which held my trembling chin. my stomach hurled as i felt him let go. i pried my eyes open to see

dalian begin to shake uncontrollably. the lustful gaze in his bloodshot eyes transforming into pure hatred and rage. with the back

side of his hand, he slapped me across my face, his wedding ring slicing through my flesh. in one hand, he yanked my hair while

choking me with the other. i was thrown to the ground. i heard a loud crack as i landed on my arm. dalian, boiling with disdain

that his wife could not enjoy the pleasure he was giving her, kicked and punched my broken body. this is not him. just this

morning he had whispered words of love, but now he was screaming vile, unspeakable words. even when he said my name, it

sounded like poison rolling off his tongue. yasmine. he picked up the half empty bottle on the counter and smashed it against my

head. liquor and blood trickled through my curls. this is not him.

dalian stared wide eyed at his broken masterpiece sprawled out on the tiles, panting heavily. our breathing blended together, an

orchestra of shallow and ragged, deep and haunting. we both stayed motionless, the silence binding our two worlds together. an

ember of realization ignited in his eyes the longer he hazed upon my crooked arm, the blood soaked sundress, the tears now freely

streaming down my battered honey skin. it was as if my pain had made him sober within seconds. he gently lifted me from the

blanket of glass and carried me into the bathtub. it can not be him.

warm water gushed out of the faucet and i watched the crystal surface turn red as it rose, yet rather than marvel in wonder at how

my blood painted on to the ever changing canvas, as i had done every time before, this time i prayed the water would keep rising. i

prayed the water would fill my lungs. yasmine. i heard the voice, the soft hum of my name as the water pummelled against the

porcelain. yasmine. i began to slip under, my mind fixated on visions of waves and darkness. the sea. the atlantic. my

atlantic. yasm…. dalian stroked my shoulder and i was startled awake from my fantasy, groaning as my bruised skin tore at the

sudden motion. tears had formed on his lower lashes, his cheeks sunken and grey. sorrow and regret spilled from his lips.

yasmine. i am so sorry yasmine.  please forgive me. i love you. i promise i will never hurt you again. i love you. nodding slowly,

i let him continue with his routine, but for me, it was different. it was all different:

he told me i was beautiful

he gently brushed my wet curls back

and whispered sweet nothings into my ear, honeyed words with no meaning

fire spread across my face, shame and disgust creeping into my disposition

he laughed at the red glow, clueless to the thoughts and feelings in my mind

i scrunched my noise in protest, an impulse, a second of normalcy

this urged him to plant kisses on my forehead, far more painful than the kicks

he pulled away slowly

and i was able to breathe

i froze as his chocolate eyes bore into mine

a moment of silence passed

and then he smiled, but it no longer brought me warmth

his dimples like the burn marks of a cigar

he promised me he would change

but, unlike the past, i did not believe him

nor would i ever again

dalian waited for my response, but i just watched the water drain, circulating and disappearing. i want to disappear with it. i told

him i forgave him, the lie foreign to my ears. he kissed me again and thanked me as he left the room. i promise you. i love you.

yasmine. i had to leave. i was being pulled out to the sea, the voice coaxing me with the promise of freedom and sanctuary.

i left my prison, dressed in the orange jumpsuit of my time there; my lace wedding dress. the liquor and emotion had finally lulled

dalian into a deep slumber, so i had no fear as i walked out of that blue door. the streets were dark and quiet as if the night had

driven away the alley cats and the lingering souls. in the distance, a soft rumble of thunder broke the silence. my dress swept dirt

from the streets, then sand from the beach. the familiar crash of waves and smell of salt offered healing to my tormented

being. yasmine. here the tide called to me, frantic and insistent. yasmine. the winds were singing, growing more loud and more

wild. they heard the tide crying out to me, and their haunting song joined in. yasmine. my heart betrayed me as i thought upon

dalian. guilt and uncertainty clouded my vision. the sea now seemed malevolent. but a strike of lightning, followed by a loud

boom broke through the doubt.

swirling depths. yasmine. even with the winds hurling water and sand upon me and the skies alive with terror, i felt calm.

yasmine. i dipped my toes into the sea foam, and waded in deeper and deeper, the waves pulling in the mermaid they had

seduced. yasmine. the lace dress, once the clothes of a prisoner, now acted as my weight. the water was rising over my heart, my

shoulders, and finally my head. i did not fight it. i sunk down, the schools of fish circled around me, welcoming their sister of the

sea. my lungs screamed for air, but the waves reassured me. yasmine. you are safe. just let go. the added weight of the dress laid

me to rest on a bed of vibrant coral. my final resting place. yasmine. the atlantic whispered once more and i agreed to join.

goodbye dalian. i had never been more free, or more safe, than i was buried beneath the atlantic.

into the oily pearl of the sea’s surface,

*inspired by the poem, Ossuary VIII, written by Dionne Brand*

4 thoughts on “buried beneath the atlantic”