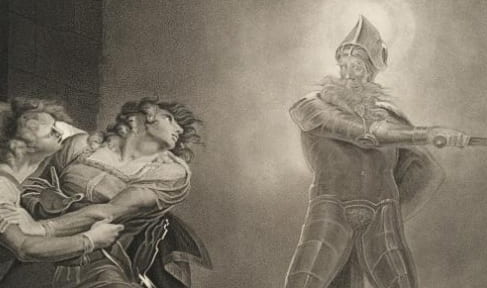 Hamlet — a play that can be interpreted in countless ways — is my favorite of Shakespeare’s many works. No matter how many times you discuss it, twist it, perform it, or read it, you will always draw new ideas from it in some way — be they about a certain character, the relationship between two characters, or the plot itself. I find myself, therefore, wondering how the Bard pictured it in his own mind, and what he truly meant by the words he put down. My experience with Shakespeare, though not as extensive as some people’s, is based on the different essays I have read, the plays themselves, and background information about the playwright and his life that I have encountered throughout my life. Now what I write next could be wholly and embarrassingly incorrect, so take it as you will, but I feel as if I am versed well enough in Hamlet at least to write on this topic. So without rambling extensively for any longer than I must, I will get into what I have to say.

Hamlet, in my eyes, is the perfect example of a tragedy — it being a piece where the main character is fundamentally brought down by his own unfortunate misjudgment, pulling down everyone with him in the process, and destroying the court of Denmark in a more brutal and selfish way than Claudius ever could have. It truly is ironic, then, to think about that: Hamlet does more damage than his uncle really ever did, or would have done, had he been left to his own plotting and debauchery. Claudius’ affinity to deal with the kingdom’s allies and enemies alike in a peaceful and diplomatic fashion is not entirely a flaw in his character — not to say that his usurpation was at all justifiable, but as far as we can tell in the play, at least on a surface level, he has no ill plans for Denmark itself once he begins his rule of it. That leads me into my favorite — and the most interesting, in my opinion — interpretation of the play.

As a writer myself, I always love a story with depth, where there is no definite border between good and evil, and where there is a darker undertone to what may seem blasé and straight-forward. The ghost of King Hamlet, who to most people is just a restless spirit come back to enlist the help of his son in avenging his death — the way I, too, originally saw that character — would certainly be more of a fascinating part of the tale if he was not truly the dead king, but a devil, as Hamlet originally suspects.  Think of it this way: One belief about demons it that their goal is to collect souls for Satan, traveling up to earth to possess and manipulate humans in order to kill and destroy, thus, collecting souls for Hell. If the ghost, therefore, is a devil instead of a spirit, it would have done quite a fine job in its task, then, as most of the royal court ends up dead because of its initial request to Hamlet. Shakespeare even addresses this, which my writing mind would pick up as a hidden intention on the playwright’s part as to the ruse of the ghost and its requests. If the question of its veracity were never an important plot point, why would it be written into so many lines of dialogue? Shakespeare knew that it would be far more interesting to create a debate about what the ghost really is, and the presence of the devil theory within the text itself almost confirms for me that there are two options here: he is Hamlet, or he is a devil. On that note, however, one might argue that the ghost’s stolid belief that Gertrude should not be harmed would rule out the devil theory, and its appearance in her chambers once Hamlet lays a hand on his mother is a sure sign that it can only be King Hamlet and nothing else. To that, I say, true, unless you take another look at it. What if Hamlet hurt his mother, even killed her, in her chamber? Would the ensuing fencing match between Hamlet and Laertes have occurred then? Would Claudius have just killed Hamlet, thereby ending the bloodbath and the invasion of the Norwegians at the end of the play? As with anything in this play, that is debatable.

In my own personal storytelling mind — my own specific preferences on what makes good literature included — the way that Hamlet would be most effective and thought-provoking would be as the story of a man so wholly depressed and lacking in purpose that he accepts the task of a wicked devil who aims to slaughter the royal court of Denmark, which it sees is already quite disorderly as it is. Like a shark, it scented blood at the murder of King Hamlet, and came to collect more blood by mentally poisoning the king’s son and using him to eradicate the rest of the country’s monarchy, thereby ensuring that the Norwegian army could sweep in, taking the seat of Denmark and spurring another countless number of years of war and bloodshed. Dark and gloomy, I know, but that is how I feel the tale of Hamlet should be from a standpoint of someone who loves tragedy and reality in writing. In the context of Shakespeare’s time period, the ghost could have acted as a metaphor for the leaders of that time, or as a metaphor for greed, jealousy, and selfish ambition as it slowly consumed the Danish court from the inside out. This would be apt in regards to the play as well — the ghost could be the ambition or the mental turmoil of Hamlet, urging him to commit horrible atrocities in the name of his dead father.

Hamlet is my favorite of Shakespeare’s plays, for, as you can see above, there are endless ways to interpret it. Whether you prefer my own gloomy, yet thought-provoking, cautionary tale sort of look at it, or you would rather see it in a more jovial light, you can always go to the theater and watch a different version, and every one of those versions is as unique as the last.