Response to “The Jackhammer Syndrome” and the visual, Diogène ou la Lucidité (2005)

The women in my life speak in echoes.

Empty and hollow, despondent tongues helpless against the leaden weight of conformity that has made cages of their souls. The only part of them that speaks is their eyes – they are the key to desires long locked up but never quite forgotten, hovering precariously over the precipice of uncertainty they dare not tread.

You see, the women in my life are afraid.

When I was seven years old, my mother sat me down gently, with a solemn gravity even I could understand. She told me, then, the story of my older sister Maya – Maya, who had an office job and jet black hair devoid of any grey. Maya, who had a husband and a baby and a white house with a picket fence. Maya, who lived in the realms of black and white conformity that allowed her to prosper. “Darling,” my mother said, stroking my hair back from my forehead. “Promise me that you’ll be like your older sister when you grow up. Promise me you’ll be a good girl, that you’ll be careful, safe. You’ll be my pride, so that no one will ever be able to say that I failed as a mother.”

She breathed a slow, warm sigh. “In this country, my dear, where we are strangers, a woman is only as strong as her silence. Learn from us that nothing good has ever come from chasing desire.”

“But Mum!” I protested, twisting towards her in shock. I had never been one for silence – I thrived in the mayhem of the moment, the chaos of my own voice spiralling towards the ceilings and ricocheting off another’s.

“When I grow to be as old as Maya, I want to be a reporter – stories are my treasure!” I had exclaimed, wide-eyed, anxious. To give those who could never speak a voice, that was my only dream.

My mother’s eyes hardened, her prison of a mouth creaking open. “What? Are you going to travel to dangerous, wild places without the certainty of knowing whether or not you’ll escape with your life? Don’t you understand that women who speak out, women who pursue what they want without heed, are built to collapse? Do you want to throw away the sacrifices your father and I made in bringing us here?”

Her voice was arresting, thick and muffled, and I gasped when my mother pushed me from her lap and hurried off, wiping tears from her face, one hand over her mouth as though to silence the sin of emotion that swept through her. She was right, my mother. She had left her country for my sake and travelled to this new land where we wore the faces of strangers, and thus had to don the mask of conformity so we may have certainty if nothing else. Only through being like everyone else would we be safe. I let my mother’s voice reverberate through my being and coil through my insides. I wove the chains of fear through the chambers of my heart, around my lungs, padlocking my tongue.

That was the day I learnt how to be an echo.

Now I too am a woman of jet black hair and solid eyes, a woman confined by the bounds of conformity. I stay silent and echo what I am told, allowing only the slightest voice through the bars of my teeth. I try and try so hard to conform to these knots I could hardly untangle.

And yet, patches of emotion hover still on the streets where I lost all my battles, the alleys deep inside where I hid my dreams.

It was fear of this uncertainty, this inability to stifle my passions that stirred my visit to Maya. Maya, the perfect older sister who revelled in the black and white, the right and wrong, the echo  of a woman whose imprints I tried so hard to follow. Perhaps visiting her would put an end to this horrible mounting turmoil between what I wanted and what I should have been. I stood outside her white house with its white picket fence, its perfectly manicured garden, for what felt like an eternity, bearing false teeth in a mock smile, pacing, and wondering why it was that my voice kept clawing at this prison to which I should have succumbed. Everywhere I turned there were dead ends and stop signs, knots where the path should have been untangled when I had accepted my fate. It was in this distraught turmoil that I finally glanced up at the house once more, and startled.

I noticed Maya, with her forehead pressed against the window, staring outside at nothing in particular. She was outlined in grey, and her breath fogged the window, blurring the outline of her mouth. She stared, motionless, outlined in shades of uncertainty, and as I stood transfixed until I noticed her weeping. Her sobs, her words, were blurred by the outline of the fog – a censor for the emotions she never should have felt, a protest against the silent suffering she had undergone all these years. She wailed, and through the black and white walls she put up, I could hardly decipher her plea.

Maya, with the stifled dreams and the hidden tears, who wanted things so badly she lost them in the heat of the fog. Maya had been suffering all these years against the conformity that had entrapped her, stolen from her her voice.

In that moment, I reached deep inside myself and unwound the chains that had suppressed me for so long, unlocked my tongue and threw away the key so that my voice would be hidden no more. There are moments of such elation in one’s life that it’s like being struck alive once more, resurrected. In that moment, I promised myself that I would tell the stories on which others had been gagged, unknot for them the chains that had bound them to conformity for so long. I would become a reporter – these stories, these people, were my treasure. I walked towards the white house with the white picket fence and knocked, drew my sister out and freed her from her prison.

Once, the women in my life spoke in echoes.

Once, they locked up their voices, chained in leaden conformity and the fear of the uncertain.

But now, we forge our own path, untangling from the knots of fear – a path into uncertainty.

We are our own path, and the travellers that tread forwards.

We are imprints no longer. 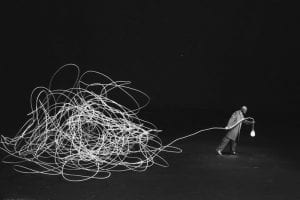 http://deanwinchesterismyhomeboy.tumblr.com/post/114477125815/the-start-of-something (don’t ask about the website; I’ve no clue either)