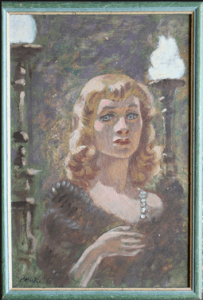 …role of honesty when an individual experiences tension between optimism and reality.

In a world where the harsh glare of reality is unflattering on so frail a face, it serves as no surprise when individuals turn towards illusions so much more gentle on the eyes. Reality in nature is so oft perceived as harsh and flat, black and white; it lacks the dimension, the shades of grey in which optimism blooms. It thereby stands that the tension between reality and its association to honesty ignites a fear, an inherent revulsion towards both. To suppress honesty, then, is to flourish in a world far away from one’s dismal reality, a world of illusion and optimism. Nowhere does this desire to maintain appearances manifest itself more aptly then in the decay of Blanche DuBois, from Tennessee Williams’ A Streetcar Named Desire. The play details Blanche’s frantic spiral into insanity as she tries to escape her reality through the illusions she thinks ought to be true. Through Blanche DuBois, one comes to realize that sensitive individuals wrought with the tension between optimism and reality will attempt to suppress the honesty they deem cruel in order to protect themselves and others. However, honest confrontation results in the discrepancy between their optimistic ideals and reality to widen beyond reconciliation; their frail illusions soon shatter under the glare of reality, and, unable to cope with this influx of cruelty, they may fully retreat into their delusions – refuge.

For an optimistic individual, cruelty is unforgivable – to wrench from someone the happiness they have always sought to bestow is a sin, and as such, they may delude themselves into thinking they enjoy the illusions they project. It is when their illusory happiness shatters that they are forced to confront the discrepancy between their optimistic views of themselves and the reality of their being. When Blanche first falls in love and marries Allan Grey, her optimism is like a  ¨spotlight” – so blinded is she by the ideal of first love that she fails to recognize the peculiarities that surround her husband. In her determination to remain optimistic, she denies herself any honesty, discrediting the “Grey boy’s” reality as a cruel wayward whispering and nothing more. When the tensions between her reality and her optimistic illusions escalate – when she is forced into the glaring light as she realizes her husband is having an affair with another man – Blanche acts once again on her desire to smother her honest feelings and pretend that everything she is at peace with everything she has experienced. Eventually though, it proves to be too much. When she is unable to maintain the illusions any longer, she utters her cruel truth to Allan – that she was “disgust[ed]”, repulsed by his inability to maintain his facade for her as she had for him. Hearing this, her young husband commits suicide, and Blanche is left alone with the echoes of a gunshot and her deliberate cruelty ringing in her ears. Through the death of Allan, Blanche is forced to confront her own reality and realize that she – who had always seen herself in the soft glows of illusion – was not the kind, gentle lady she had always imagined herself to be. She had corrupted what was most beautiful to her, fallen into the ¨quicksand¨ she had attempted to save Allan from. It is here that the association between honesty and cruelty solidifies itself for Blanche; it was because of her failure to maintain optimism, her surrender to reality, that Allan’s blood was now on her hands. This results in Blanche being set off into a panic; her ¨intimacies with strangers¨, and finally her affair with a student, are all desperate attempts at diminishing her reality, a false optimism through which she attempts to reincarnate Allan once again. Her actions display that an individual forced to deal with the reality set in motion by their own actions will be unable to confront themselves honestly, choosing instead to romanticize their past and maintain the only facade that can provide them safety. However, the manifestation of these falsivities leads only to an emptiness – both within themselves and their ideals – they lack the ability to remedy.

When an individual is unable to cope with the unspeakable cruelty dealt to them by others’ need for honesty and reality, they may seek refuge in their illusions, attempting to distort the honesty that has served only to hurt them. However, a rejection of their illusions through honest confrontation serves to destroy the optimism they strive so hard to maintain. Everywhere Blanche turns, she attempts to somehow rekindle the ¨spotlight” that was her love for Allan – a love in shades of grey that manifested itself only in dishonesty. Blanche first expresses interest in Mitch because she takes to the fact that he appears to be more ¨sensitive¨ than the rest of Stanley’s friends. In preying on Mitch’s gentleness, Blanche wants only to mirror her love with Allan, who she saw as vulnerable and delicate. Her astute attitude towards all that would expand her illusory world displays that Blanche is constantly looking for an escape from the terse nature of her reality – the fact that she has gone from a woman of standing to a creature of disrepute. To seek Allan, an existence with dimension in shades of illusion, is to seek refuge in the optimism she believed would have kept him alive. It is Blanche’s inability to separate herself from her need for illusion that results in her dishonesty towards Mitch in their relationship. She maintains the appearance of a coy, demure woman ready for marriage, and yet she is unable to stop herself from manipulating her reality – her lust, her alcoholism, her need for security in desire – in order to fuel her ideals. This distortion between her illusion and reality eventually results in the shattering of her ideals when Mitch forces her into the light and tells her that she ¨is not clean enough¨ to be a part of his life; that is, her inability to reconcile the illusions she projects deems her unworthy of a return towards reality. In exposing Blanche’s truth to the world, Mitch degrades her and bars her from ever finding a place in their reality; he dashes the optimism she clings to in order to survive, and his brutal honesty cruelly displaces her from her self-worth, instigating her descent into delusion. When an individual who suppresses honesty for the sake of illusion is subject to the overwhelming tension of having their truths exposed to the light, their ideals shatter; cruelly denied their ability to reconcile illusion and reality, they retreat further into their delusions. Their need to stifle honesty under the pretense of security prevents them from the realization that in doing so, they are only aggravating their derision and suffering.

The heightened tension evident in an individual who has seen their optimistic ideals succumb to ruination results in an increasingly fragile mental state, wherein which their inability to reconcile their optimism with their reality leads to them being overwhelmed by the reality they have struggled so hard to avoid. Blanche, paranoid and distressed after Mitch’s harsh honesty, is once again turning to her illusions to provide her with a reality she can cope with – one where she has been invited to a “cruise”, “moonlight swim[s]”, a reality where she is wanted and where she may retain her sense of optimism. When Stanley comes in, he exploits and corrupts her vulnerability – a direct result of her cruel encounters with reality – in order to toy with her and, eventually, rape her. Stanley is the epitome of the cold, point-blank reality Blanche has made it her mission to avoid. It is in his ¨deliberate cruelty” towards her after coming to realize just how frail she was that results in Blanche’s final spiral into insanity. She had lived her entire life in the pursuit of optimism for the sake of deflecting cruelty from herself and others; illusions were her penance, and to have that rejected by Mitch and destroyed by Stanley is too much for her to bear. It is here that she breaks and loses any connection to the reality she so abhorred; she is deprived both her ideal and any claim to a life that may have borne some semblance of normality. When an individual who has lived their entire life in illusion for the sake of warding off cruelty and maintaining an air of optimism has their final refuge destroyed, they will break under the honesty that they had been avoiding for so long; in a bid to protect themselves, they forsake the reality that has dealt them nothing but cruelty and retreat permanently into their world of illusion.

In the play A Streetcar Named Desire by Tennessee Williams, the tragic decay of Blanche DuBois is utilized as a means to express the idea that heightening tensions between optimism and reality result in the stifling of honesty in order to protect oneself from the truths they deem cruel. However, the resulting chasm in one’s ability to reconcile their optimistic ideals with their harsh reality results in their deception coming to light, and the shattering of the illusions they so loved. Finally, the shield of optimism they had tried so desperately to maintain shatters as a result of the cruelty they have been forced to face, and like the shadows they so love, these illusory individuals will slip far away into their optimistic worlds. To seek penance in the shadows and optimism in illusion will serve only to distance one from the dimension and beauty they so desire. It is only through a life lived in the light – in direct accordance to honesty and truth – that one will flourish in all the shades and splendour life has to offer. It is only in the light that an individual may seek to dispel the shadowed cruelty they so abhorr, only in the light one may find solace, comfort – refuge

-> Fun Fact: Did you know a white moth is said to embody the soul of a loved one?

*A Public Service Announcement for My Beautiful, Intensely Stressed-Out Geniuses:

There came upon me, once, a dark time in my life where I assumed the onesie was a rather childish, silly article of clothing.

Suffice it to say, I have progressed past those Dark Ages and into the Renaissance of comfort that is this magnificent fluffiness. Guys, just so you know, studying for diplomas in a onesie is an actual  m o o d  towards which I was formerly ignorant – 10/10 would recommend. Remember not to forgo comfort and time for yourselves this exam season. You are not expendable – you are some of the most precious, gifted, and hardworking individuals I have ever had the pleasure of adoring. To deplete yourself at the expense of incessant anxiety would be a grave injustice to the vast reserves of potential each and every one of you has cultivated throughout the semester. Find comfort in the strength you have developed in your voice, your words.

Deep breath, chin up, shoulders back, you absolutely resplendent being, you.

Then, afterwards, let’s have a onesie party 🙂