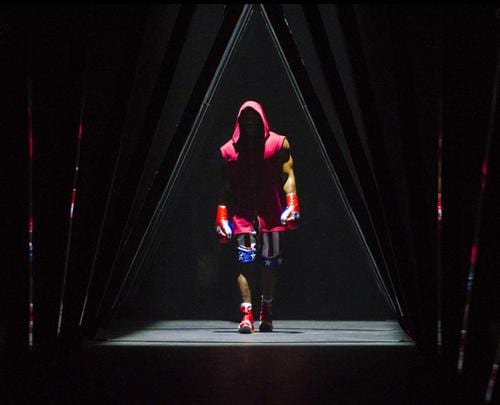 Money and fame are not handed to anyone in a gold package with a silver bow on it. They are rare aspects of life – ones which there is a global marathon towards. My family, the Wayne’s,  was not excluded from this; my father working 3 jobs, 20 hour days, my mother gone for weeks on end to serve as a waitress somewhere in New York, even my sister and I were put to work the second we were able to lift a weight greater than 30 pounds. Education wasn’t even a question. New Jersey’s ghetto is not a forgiving place. To survive, you had to work. Endlessly. And that’s what we did, to provide for ourselves and each other. For as long as we could, anyway. Such was the lifestyle of a Wayne.

There wasn’t much time for entertainment – nor was there the money for the option of it. We had a small television set with a limited channels list. One of which, was WWB, WorldWide Boxing. Being the youngest, I was given a little more leeway in comparison to my family, and this was my only source for fun – my connection to the outside world. I watched as different men battled fiercely against each other, trading blows and dodging the bigger shots, trying to gain the upperhand. Watching men from different parts of the world compete for the one spot they craved most, the one title that made the other medals look like overly sized dimes. The championship title for their class. Having done some measurements, I recognized I would fit as a featherweight, barely 120 pounds. I was 17 at the time. 5”10, 120 pounds. I’d already checked the weightings of every member of that weight class in the WWB. The lightest, Jordan Caleo, was 5”11, 132 pounds; the heaviest, DeNolan Ryder, 6”4, 150. Also barely a featherweight, but for another reason. Watching their techniques as they danced back and forth across the ring, I could feel the tension in my blood. As per routine, I’d put on my cheap, homemade gloves as they put on theirs, and punched when they did, ducked when they did, moved like they did. This was the only way I could forget the life determined for me. Or, perhaps, change my destiny.

I was 23 then, when my father decided there were too many mouths to feed and not enough money being made. A woman without any protection, alone, in this place would be raped and murdered within the first week. That’s just how life is in the ghettos of New Jersey, and there was nothing I could do to change that. Nothing the plumbing company I worked for could do about it. Nothing my father could do about it. I was homeless. And I needed someone. I needed someone more than myself, and with a prayer, she came. She found me. God knows how she saw what was in me but she did. Caroline Ann Carter. 23, a writer, sponsored by her wealthy father, she was slowly finding a living. And she found one for me too. I told her about my job as a plumber. My life as a Wayne, and my personal pastimes of training. Some thought and discussion, and she inspired me to pursue boxing as a long term goal. It had always been on my mind, which was why I kept training routinely, but she made me believe I could be so much more. She believed in me. Which was why, from that point on, I had to believe in me, too.

2 years. I still worked as a plumber but only a couple hours a day. Caroline, I liked to call her Cari, made me promise to steer away from alcoholism as a coping mechanism, one my father had made me accustomed to. I was told, from day one, that she would support me financially as long as I worked hard. And so I did.

Pain in every punch.

Ache in every step.

I check in for my first professional fight tomorrow. I quickly take some measurements in my bathroom. 6 feet even, 149 pounds. Not bad. Fighting experience aside, I would be considered a higher end featherweight. Lack of experience may drag me back a bit, but I can’t let that stop me. Not now. This was my first impression to make to the world. To Dani Koret, 7 wins, 2 losses, 4 ties, 3 knockouts. Fear was not going to take my side tomorrow. And so I can’t let it get to my head. I can’t let anything get in my way. Our way, mine and Cari’s. We’ve come so far. And this was my chance to prove myself. As a Wayne.

I walked into the ring on a depressing note. My first fight. I would have analytics watching me like crazy. And Dani was already in the ring, jumping circles, showing off his hard-earned figure. I was an unnamed 25 year old with no experience. It seemed almost cruel to him, our fight. I couldn’t even look up. My nerves wracking, I knew I couldn’t fight like this. Not like this. I wanted to run, ask for a fight in a week. I made it to the base of the ring. Three steps until I was inside for the biggest fight of my life. I climb the first step rather easily, as though trying to feign confidence, and yet failing so terribly. The second step was much harder. The weight of the fight, the pressure of the crowd, with Caroline buried somewhere in it. I didn’t even have a coach in my corner, someone to turn to when I’m on the ground with blood welling up in my eye. I made the step. Suddenly, I desperately stop and frantically search for Caroline. Her dark hair, blue eyes, pale skin. Her tall and firm demeanor. I find her in the front, a few seats down from where my coach would sit. She stares at me. I can’t tell what she’s feeling. Pride? Anticipation? Fear? She simply stares at me, and nods slowly. A nod that tells me I can do this. That this was it. My pain, my time, my hopes and dreams. Our time. I could do this. With her.

I step into the ring and Dani is still flaunting his prowess, giving the audience a visible display of how he plans on pummelling me into the ground. His movements are quick and precise. He stops momentarily to look at me, scanning every aspect of me. Perhaps putting on a wager to see how fast he could win. I wouldn’t let that get to me. I raise both my hands in the air, and walk to the side of the ring where I can see Caroline. We make eye contact again. We both nod, together. I put my arms down, walk to the middle of the ring, where Dani and the referee are waiting to start the fight. The ref quickly goes through the rules and regulations, reminding us constantly that we are to pull away at his touch. 5 rounds, 3 minutes each, with a 1 minute break between rounds. We both agree, and the ref tells us to touch gloves. Dani hits mine down. Hard.

The fight starts and Dani rushes into the middle. Ring dominance is on the judges scorecards, and he clearly plans on winning that category. I can’t overthink this. I’ve trained for this. I’m ready.

I barely manage to dodge his first assault. His hands are fast. I can barely keep up with them when one hits my jaw. He pulls back to wait for my retaliation.  I don’t know what to do.

1 minute is already gone in the first round, and I haven’t even managed to touch him. He’s smiling, taunting me, trying to provoke me. I go in for a quick jab, and he counters with a hook and an uppercut. I’m winded and on the ground, wincing in pain. Three punches and I’m already down. Not good. I get up before the ref begins the countdown, and Dani rushes me again, this time landing a punch on my eye. A good one. I’m on the ground once again, with 15 seconds left on the clock. I can’t let myself lose that easy. Not after everything. I get up one more time, and seeing Dani rushing me again, I quickly latch onto him, both arms around him. I hold that for about 3 seconds until the ref commands me to let go. Dani responds with a quick jab before the bell for the first round rings. Dauntingly, he climbs the ropes of the ring, celebrating as though he’s already won. We got to our respective corners. I get checked for any major injuries. I turn to see Caroline looking at me. Angrily. She signals, ‘is this all you’ve worked for? To get beaten to a pulp in public?’ She expects more from me. I try to convince myself to snap out of it and fight like I’ve trained, when she motions me to look down. To read what it says on my boxing shorts. WAYNE. My father’s name.

The bell rings around, signalling the start of the second round. Like last time, Dani runs straight into the middle. He expects to end it this round. So do I.

He begins his flurry of punches again, all weak in comparison to his previous punches but much faster. I step forward, throw a few jabs, hoping he’ll back up. He steps to the side and aims a hook straight for my temple. A knockout guaranteed. This is it. My chance to fight back.

I duck, wait for his arm to sail by my head, and counter with an uppercut straight to his chest. It hits him hard. He stumbles back a bit, astonished by the sudden release of power. I take this opportunity to my advantage, and unleash an assault of my own. He may be fast, but he can’t take a hit from someone as big as me. I jab and slip his flailing arms, follow it with a cross, an uppercut, and a right hook. My hardest punch. He connects with the ground, seemingly unconscious. I couldn’t have won with just that, right? Surely it’d need a little more. As per my expectations, he gets up, still slightly dazed. I rush him, not giving him the chance to recover. Not even bothering to dodge his punches, which clearly have no force behind them, I use my signature combo.

He goes down once again, I think for good this time. Filled with adrenaline, I rush to the sideline of the ring, lean as far as I can, and motion at Caroline. The ref has already started the countdown.

Dani is up by this point, but he can’t seem to stay stable on his own.

That’s a win! A knockout!

I start to wildly celebrate, as Caroline runs into the ring and jumps on me with a hug. Our arms wrapped around each other, I stop to hear the crowd chanting.

I reminisce of what that name meant to me in the past. Hard work, without a true goal. Temporary solutions. But now. I own it, and am proud of it. I wonder if my father is watching the WWB. To see his name on the screen, starting his own journey. And I don’t plan on stopping. For anyone, for anything. I am a Wayne.

One thought on “Fighter for Life: Polished Personal”