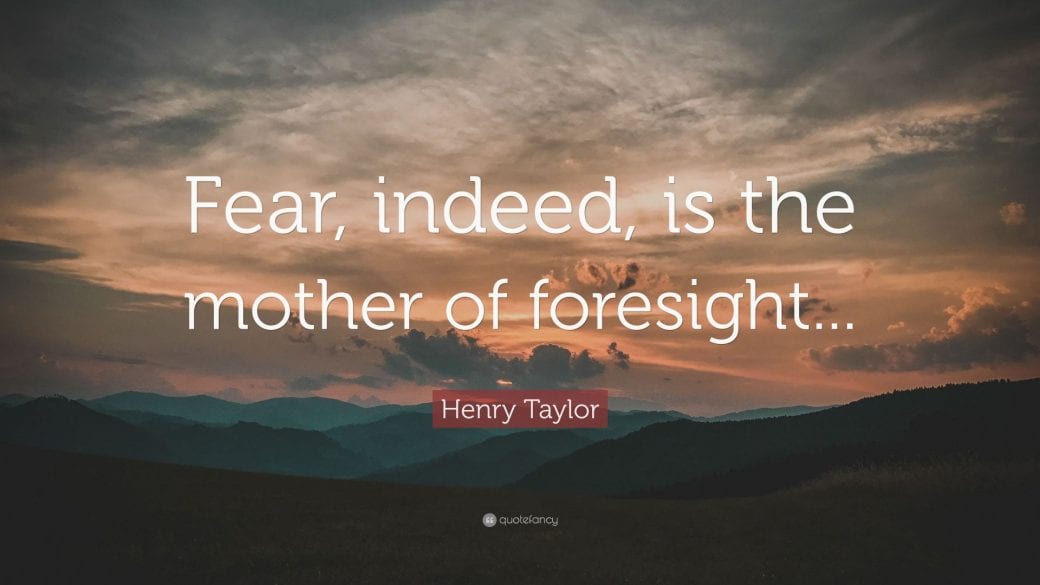 Fear and Foresight to Allow for Introspection

Responding to James Lasdun’s poem “To a Pessimist.”

In making life-altering decisions, the interplay between fear and foresight in making said decisions actually allows for one to make a more honest and effective choice. Fear often acts as the initial motivator of important decision making, however fear (or unlikely worries) show what one cares the most or least about. It is only when these subconscious feelings are paired with foresight, likened to realism and a truth to one’s self, that one can effectively act on their fears and make the best decision for themselves presently and in the future. Such ideas of fear enabling foresight, and further introspection, can be seen in my own life as well as James Lasdun’s dissuasion of pessimism in his poem “To a Pessimist.”

Within “To a Pessimist,” Lasdun dissuades the notions associated with pessimism, ultimately leading to a decision to view life in a more positive manner. Lasdun begins his poem sympathetic to pessimism, a fearful and negative view of life. However, he quickly dismisses pessimistic fear with positive insight as the poem progresses. For instance, in rebutting the twisted cliche of “the grass is basically ashes” on either side of the fence with the “sheer oddness of being brought into this sunlit, sublunary, existenc[e],” the speaker offers that not all odds are poor in life. This pessimism, likened to fear, breeds an awe of life, as  indicated through the radiant “sunlit” depictions of existing in a world previously black, or without life. In essence, reflecting upon pessimism allows for a recognition of the true, more optimistic circumstances of life. In this manner, disproving pessimistic views of life with foresight, Lasdun invokes a sense of introspection by the end of the poem – coupling the “half-full or half-empty glasses” together promotes the idea that foresight and fear, respectively, go hand in hand and enable greater insights. “To be born,” initially viewed in a pessimistic light, is now understood to be miraculous – the speaker, with the foresight of the greatness of life invoked from initial fearful ideas, encourages readers to now “aspire to happiness” as opposed to their previous pessimistic outlook. Therefore, introspection resulting from fear-enabled foresight, allows for more truthful, realistic perceptions of one’s circumstances, translating to better decision  making abilities as one is able to make impactful decisions with their best interests in mind. It is through this notion that the speaker encourages the reader, pessimists specifically, to decide to live their life not in the solely in the black but in the light that arises as a result – after all “the gods…have been known to bless as well as to punish.”

In my recent experiences with making life-altering decisions, I too have found that fear-enabling foresight, allowing for introspection, does allow for better decisions to be made. Specifically, I found this to be true in applying for university. After my experience at U of C with the Heritage Youth Researcher Summer Program, I had my heart set on going to the University of Calgary. I was extremely excited to begin my post-secondary journey at U of C. My father, on the other hand, had offered that Mount Royal University would be a better option for me. Both of my brother’s had gone to MRU and gotten into their programs early, so my father’s foresight of pushing me to go to MRU was justified in my mind. However I had the constant, irrational fear that MRU would not be enough to get into medical school, would not be enough to get the undergraduate experience I wanted, even if it was clearly effective for my brothers. I felt pressured to go to MRU, in spite of my personal preference to go to U of C – my mindset towards going to university changed, and was now synonymous with that of a “glass half-empty…[that] invariably smashes.” My initial excitement towards university applications was replaced with a more pessimistic, fearful outlook concerning my impending choices. It was only after a conversation with my dad, telling him of my fear that the MRU would not be enough for me, that my own foresight of what I wanted in the future made me realize that my fears were only reflecting what I valued and what I should be basing my university decision on – reflecting on my fearful associations with university allowed me to understand the truth of my circumstances – foresight. I recognized that after my summer at U of C, research was important to me – something not offered at MRU until fourth year, but something that I could be a part of throughout my undergrad, and this coming summer, at U of C. Research, as I had been told my many, is an important thing to be a part of, especially when having an end goal of medicine. Thus, both of my fears, that created a pessimistic attitude toward university, were explained and now able to be reconciled. With fear-induced realizations, I was able to make the best decision for my future. No longer was I overcome with dread and pessimism at the thought of making university related decisions, rather I was able to “resist despair” and re-instill “[aspirations of} outright happiness” regarding university because of the fears I initially held.  It was not until foresight allowed me to understand my fears that I was able to choose the best university with my own interests and end goals in mind.

It can therefore be determined that, in the interplay between fear and foresight, one is enabled to make the best possible decision with the introspection that results.  In essence, one’s fears initially drive their decision making skills. These fears are based upon a pessimistic view – however, they often reflect our deepest values or insecurities. Foresight, likened to the reality of one’s circumstances and accountability to one’s truths, can aid in realizing the values in said fears. Accordingly, introspection is inevitable, as evidenced through my own life and James Lasdun’s poem “To a Pessimist,” out of which more truthful and sensible important decisions can be made. Ergo, to make a life-altering decision with initial nuances of fear is to begin the path to making a better decision and ultimately, a better understanding of one’s self.