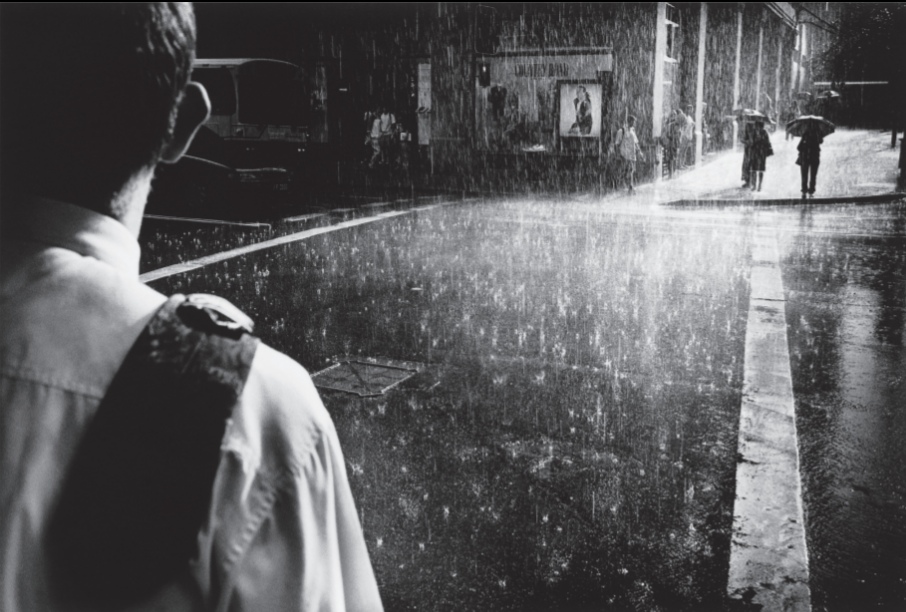 Prompt: …Impact significant events have on an individual’s ability to determine their own destiny?

Theme Statement: When an individual is emotionally hurt by witnessing a significant event in the life of another person, they may respond to their pain by adopting the perspective of an observer, rather than a stakeholder, thereby shaping their destiny.

Creative response to Crosswalk in the Rain.

On Photographs and Rain.

I heard once that, to every conflict, there are always three perspectives, two of which belong to the people involved in the conflict and the last belonging to the witness. I didn’t quite understand, then, why anyone would care much for the perspective of the witness because all of the best ones are far removed from the scenario. The connections cloud the accuracy of the recollection, and, over time, witnesses become incapable of distinguishing a person from the reflections they leave in the water. Two entirely different narratives.

It was raining when she left to meet him. Her mother had said to bring him home, because he had had a meeting that day and was wearing one of his nice shirts, and could use an umbrella in the downpour. And thus she had received her task. So she put on a coat and boots and opened her blue umbrella and left.

This is precisely why I chose to become a photographer. The aperture of the camera allows just enough light in for to create a compelling narrative without the unnecessary detail. The edges of the photograph serve to refocus the eye onto the subject matter itself – the image. The stillness of the picture takes you out of time and reality.

She saw him first. He was looking across the street, one that took him farther away from where she came. Her mind was too distracted by the warm bloom of pleasure and relief filling her chest at having found him after having panicked moments ago. The anxious tangle had subsided then. Her eyes turned into downturned half-moons as her cheeks lifted with a beam.

One may say that the singular moment of a photograph is unable to invoke a sense of emotional depth in viewers; I disagree. Take, for example, portraiture. Though a painter may bend the image to meet his artistic sensibilities, the photographer must bend their artistry to the limits of that which may be captured on camera. There is nothing false about the image produced and thus the reality is often more fantastical and mesmerising than fictitious renderings.

Clinging tightly to the handle of the umbrella, she rushed towards him, boots catching raindrops in her haste. But as she saw him throw his tie on his shoulder, the silk tie her mother had given him for their last anniversary, she stopped. It rained.

To me, the composition is vital in the creation of an ideal image. The nature of reality, however, may put limitations on ideals. The perfect surface of a still puddle, for instance, changes with a drop of water. Thus, individual moments should be treated as irrevocable.

He looked as if he was some phantasm, standing there with his shirt soaked through. So she looked, looked properly. And for a moment, she saw someone else entirely.

I suppose, then, it may be said that those irrevocable moments are also the ones that have shaped me the most, but I would like to erase most of them. I would like to recreate the sensation of waking up to see something entirely different from the day before in life if I could.

But then the moment started to drag on, and the back of his head morphed into someone else’s. Horrific, with hairs rearranged themselves in front of her eyes, the shape of his head becoming malleable, stretching, pulling skin until it looked as though it could split open on his skull. Lights brightened, reflections of car lights burning into her retinas and streetlights collapsing into starbursts.

The very nature of a reset of the eyes plays well into the need for one to discover new aspects of a subject with every glance at a photo. There is always hidden depth to be recognized and pondered over, and, even if there weren’t, we humans are more than capable of complicating things to create meanings that, while not necessarily intended during the creation of a piece, nonetheless add to its value.

She blinked, and the changes disappeared. Staring at him again, he looked the same. So before he changed again, before he crossed the street, before she missed him, she grabbed his sleeve tightly and thrusts the umbrella over their heads.

I think that is something that can also apply to people. We come with histories and stories and scars that we are terribly good at concealing from the people around us; we rarely show the truth. I think these people are the most fascinating to take pictures of.

He smiled when he saw her.

“Thank you for coming to get me, sweetheart. How was your day?”

But she searches his face with shaky eyes, looking for signs of what she saw him undergo… but there weren’t any. His face looked the same, and though wet, no more or less grotesque than any man could look.

“Fine, dad. Everything was good. Why are you out here?”

He seemed to be the same man.

That interest in people can largely be attributed to my father, who was a rather solid person in my life when I was young; he was always so invested in our family that I always imagined him as someone who sacrificed his personal happiness for our family’s wellbeing.

I wish, even now, that I could have maintained that image of him, because up to a certain point I never quite understood the extent to which he silently despised us for the state of his life. I wonder if he blames us for his unhappiness or lack of success at work.

I really would have liked to have captured the image of him before he had changed in my mind. I witnessed something that I shouldn’t have seen, and because I was close to him my perspective of things became rather convoluted by my own feelings of betrayal. I remember thinking, if instead of being there I could have cut myself out and turned the moment into a photograph, I would have found his struggle more relatable, perhaps even romantic. And so I became a photographer at heart the same day that my dad quit the job that had frustrated him for the last ten years.

It rained when she first saw her father cry. Not out of sadness, but anger.

God, how I wish I could’ve taken a picture of that moment.

This piece was inspired by my experiences and my learning in AP so far; thank you for being such an inspiration to my writing.