I would like to preface this by saying that, when it comes to literature and plays (as well as a whole array of other things in life), I am ridiculously particular about what I do and do not like. So this is not a single-minded criticism of ‘Death of a Salesman,’ this is just my opinion.

The first impression that I had of Arthur Miller’s ‘Death of a Salesman’ was that it was the wanna-be ‘A Streetcar Named Desire;’ having been published two years prior to ‘Streetcar,‘ and given the fact that Arthur and Tennessee were always in competition with one another, I was certain that it was going to come across that way–as an author trying to replicate another author, a story trying to mimic another story. And while there were obvious similarities between the two pieces (take Miller’s apparent impersonation of Williams’ voice in the length and style of his stage directions. Or the parallel between Miller’s ‘soft flute’, and Tennessee’s ‘blue piano.’ But I digress.) I found that ‘Death’ did have some of it’s own original ideas, separate from ‘Streetcar.’ 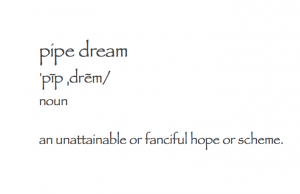 With that said, I would like to offer that the biggest difference I found between the two pieces was the yearning for the past in Blanche, and the longing for the future in Willy. So much of these characters are build upon Dreams–ones that are, more or less, unrealistic and unattainable, but Dreams nonetheless. And the more I thought about these two plays, the more I began to ponder the idea of Pipe Dreams. Of what they are. Of what it means to have one, and of how the pursuit of Pipe Dreams affect the pursuers.

In Blanche, for instance, we saw that her Pipe Dream was her youth and her innocence, and how, no matter what she did, she would never be able to get those things back. In a way, Allan Grey was another Pipe Dream for her. (For that’s all that some people are–a Pipe Dream in and of themselves. Allan was. And, one could argue, so was Blanche.) In contrast to Blanche, in Willy, we saw that his Pipe Dream resided in his need to be a successful salesman. (And one could argue that he, himself, was a Pipe Dream, too.) In both of these characters, the result of being unable to attain their Pipe Dreams fuelled both of their descents into madness, and prompted Willy’s suicide.

I suppose I am always drawn to characters like that–ones who are so consumed by their passions that it destroys them–because, perhaps, I am like that too.

I think the biggest revelation I had whilst reading ‘Death’, aside from my begrudging attitude towards it, was that maybe I am not so different from Willy Loman after all–maybe my Dream is a Pipe one like his. Like Blanche’s. And that thought scared me awfully.

Pursuing a career in theatre, like many things, is no easy feat. Despite what the common stigmatism would lead people to believe. Because, in the end, it does not matter how much I love it. How badly I want it. How desperately I need it. In the end, it will all boil down to me, and someone else’s opinion of me. Of whether or not I am good enough. Of whether or not I ‘made the cut.’ In the end, it could quite easily turn out to be a Pipe Dream, and that would ultimately destroy me.

Both Blanche and Willy were destroyed by their’s. So why not me, too?

But, regardless, I know what it is to want something so ardently that it keeps you from eating and sleeping. That it affects the relationships you have with others, in part because they do not understand. These kinds of Dreams do not only destroy the beholder–they destroy whole families.

This is proved by both Blanche and Willy.

And maybe it will be proved by me, too.

But I digress. While I was reading ‘Death,’ there is no question that I was predisposed to dislike it–I felt protective of Tennessee and ‘Streetcar,’ and I did not like how closely Arthur Miller drew inspiration from them. I felt almost territorial about it–like Tennessee had already (pardon my French) ‘pissed on the log,’ so to speak, and I therefor did not understand why Arthur had to come and piss all over the log too. It felt like an invasion of sorts.

And in the end, I was right–I knew going into it that there was a scarce chance that I would actually like ‘Death,’ due to the way I feel about Tennessee and ‘Streetcar,’ but also due in part to the fact that I never much cared for his writing. (Take reading The Crucible three years ago, for instance; I found it to be most insipid, and struggled to get through it.)

But if there is one thing I learned from reading ‘Death of a Salesman,’ it would be that I am more like Willy Loman than I care to admit; he held onto his Dream even when he was failing terribly. He held on, despite the wishes of his family. He held on because he had to.

I am the kind of girl who would do the same, sad as that may be.

We–Willy and I–are the kind of people whose self-worth depends on the level of success we achieve. Therefor, a major failure would be enough to kill us. But with that said, even when we are successful, it’s never enough. Never; we are never enough.

So when Willy finally realized that he didn’t ‘make it’, that he would never ‘make it’, it destroyed him. In fact, it lead him to destroy himself, because he could not go on living with the knowledge of his own incompetence and inadequacy. To have wanted something so terribly–to have needed it, even–only to realize that it was always five paces in front of him, daring him to catch it, while knowing he won’t–to have wanted something that badly only to realize that he would never have it would break anyone’s heart. Because Willy’s heart and soul was his Dream.

And he did try to make it work–for a long time he did–by deluding himself and his family. I think he knew, though. Some part of him, down in the marrow of his bones, knew that he didn’t ‘make it.’ That he never would. But, he pushed on, regardless. That is another thing that he and Blanche have in common–they relentlessly pursue their Dreams, regardless of the affect it has on their families, and regardless of the affect it has on them. They do it because they have to. And then, when they have realized that they have failed themselves–that they have been chasing Pipe Dreams this whole time–they combust, from the inside out. They destroy themselves, in their own way.

I fear that it will be the same with me, should I fail.

Because I know that it would kill me.

2 thoughts on “A Pipe Dream”