Words, to me, are just words. I often lack the interest or the insight to see the vibrant colors disguised in the ink. But sometimes, the curves and edges of the letters reveal glimpses of the author’s soul. Sometimes, just sometimes, I can see my own.

In July, I began reading The Stone Angel. By the second paragraph I was hooked. First, I was captivated by the sarcastic wit oozing from the narration, then by the rich imagery, and finally by the enigmatic complexities of the narrator herself, Hagar Shipley.

I liked Hagar immediately. In her old age, her inner fire blazed just as bright, if not brighter, than in her youth. I loved how she desired freedom and independence, scorning those who may snatch it from her. Along with her, I reveled in her memories, her victories over social and familial expectations. I identified with and respected this spirited woman; her victories were mine too.

But something changed. As I progressed through the pages, my perception of Hagar began to alter. Her stubbornness and temper became flaws, not strengths, as I watched them tear apart her brothers, father, husband, sons. They became casualties to her pride’s lethality. Hagar herself had not changed from the beginning of the novel; her quips and and stony disposition were ever present. Initially entertaining and inviting, these soon became unforgivable as they eroded her life, and no one was to blame but Hagar herself. She had metamorphosed from an admirable individual to an acidic fool. 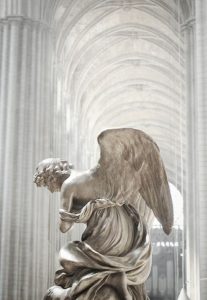 Hagar is a stone angel. Like the marble monument of death described in the novel, she is doubly blind. “Unendowed with even the pretense of sight”, the carved angel watches over Hagar’s childhood town with empty eyes. Hagar is similarly blind in that she sees neither herself nor others with insight. This deficiency cripples all her attempts at human connection. Towards the end of her life, however, she finally grasps the folly with which she has lived. And with this realization, my perspective changed yet again.

A quote: “Pride was my wilderness and the demon that lead me there was fear. I was alone, never anything else, and never free, for I carried my chains with me, and they spread out from me and shackled all I touched.” (Laurence 292)

These words pierced me. Until this moment, I had regarded the rigidly prideful Hagar Shipley as an unreasonable figure, solely responsible for the destruction of her own happiness. Suddenly, I realized the hypocrisy of my judgement. I realized that I too am a stone angel.

I am as blind as she. Unrelentingly proud, afraid of vulnerability, and irascible, I lash out time and time again. I may have beautiful wings, this luxurious pretense of freedom, but these wings are useless as long as my heart is made of stone. I may have glistening eyes, but sight evades me so long as I bear the cataracts of relentless pride. I know how, in the moment, thrusting away a perceived threat to your ego feels like a victory. But it’s not. Carrying excessive pride is a burden, toting the weight of leaden chains while trying to swim.

Common sense and experience shout, Let them go! Drop the chains! But I only seem to grasp them tighter, kick my legs harder. I love the stolid strength a stony exterior affords me and I am afraid of what I would be without my pride. How long until it drowns me?

I hate correction. I hate how incompetent it makes me feel, how weak. But I realize more and more that the real strength is not in intimidation and refusal. It is in being able to take the sting of correction and grow from it. Excessive pride can make you vulnerable, fragile, explosive. Yes, some part of me knew this already. But in my constant struggle for perceived power, I missed something that Laurence’s words, “…they spread out from me and shackled all I touched”,  revealed to me. If my pride destroys me, that is one thing. I always considered this to be a minor threat. However, when the vitriol of my pride burns those I love, it can destroy them too. No one wins. No one at all.

But there is hope. Unlike Hagar, I am young. I can drop my chains before they pull me under; I can let my pride and anger sink to the bottom of the sea where they belong. Of course I’ve always known this would eventually become a necessity, but watching Hagar’s wasted life unfold as a series of pride-driven mistakes showed me that I must let go now. The longer I bear pride’s burden, the more entangled in its chains I become. They drag me down as if I were carved from stone. I must snap off my useless wings. I must let go of my chains. One feather, one finger at a time.

6 thoughts on “Where my Soul Is Stuck Between the Pages”