Warning: Read at your own discression. Criticals are not my strong suit.

Having ideals is a necessary part of an individual’s survival, in the sense that most people are happier in their dreams and ideals than they are in their realities. These ideals commonly come in the form of longing–a dream to belong to someone or something, to be loved and accepted by another being so as to not be alone. However, when an individual’s ideals are continually destroyed, one can grow hard and cold to a world that seems to that they find themselves being a part of and yet not belonging to; misanthropy can be defined as the act of having hate, distrust, or scorn for the human condition. Socrates further describes misanthropy as “[something that] develops when without art one puts complete trust in somebody thinking the man absolutely true and sound and reliable and then a little later discovers him to be bad and unreliable … and when it happens to someone often … he ends up … hating everyone.” In her novel Frankenstein, Mary Shelley introduces this idea of misanthropy, and, through Frankenstein’s monster, explores the notion that an individual can become a misanthrope when one’s ideals are shattered by the harsh truth of reality, often due to the influence of society.

Without the input of society, one is able to form their own untainted ideals and opinions about the world, as they have not been broken by reality; in contrast, a misanthrope is someone who is continually mistreated by society, thereby lacking the state of not being influenced by others; with this in consideration, it makes sense that Frankenstein’s monster was innocent at the beginning of his life, for he had no contact with the outward society he so longed to be part of. The monster describes his first few days on earth to be painful, but also states, “Soon a gentle light stole over the heavens and gave me a sensation of pleasure. I started up and beheld a radiant form rise among the trees [the moon]. I gazed with a kind of wonder.” (85) Despite being overcome by the pain of having been created from the body parts of the dead, the monster displays his (untainted) idealistic tendencies in his awe of the moon, which is interesting because in literature the moon is often a symbol of great loneliness and isolation, which is foreshadowing of the monster’s own reality of isolation and the loneliness that follows. Furthermore, one could argue that in this instant, the monster looks upon the moon as a makeshift companion, creating an idealistic reality that will bring him pleasure as opposed to the actual reality of his solitude which will cause him pain. As a monster believing he is a person, the monster adopts the qualities of the family whose life he observes when he lives in the hovel, describing his adoration of the family accompanied by dreams and fantasies in which he would reveal himself to them and be accepted into their home.. This fantasy often leaves him in a happy state, by relieving him temporarily from his reality. This dream becomes the monster’s reason to live as he debates whether or not to introduce himself to the family, hesitating out of the fear that they will reject him due to his horrid appearance, which would serve as the final breaking point before he descends into a state of misanthropy. So, the monster continues to dream, living in a contented state, happier in his idealism than in his reality.

When one’s ideals and dreams are crushed by reality due to the influence of others, one can grow cold and untrusting of others, thus descending into a state of misanthropy, the onset of which one tries to resist. The monster states, “This, I thought, was the moment of decision, which was to rob me of, or bestow happiness on me forever. . .Who can describe their horror and consternation on beholding me?” (137) In this moment, his ideals are completely broken by the reality of the fact that society (in this case, the family) will not accept him because of his grotesque appearance, which causes him to start to grow into a misanthrope. Upon further interactions with other members of society, the monster realizes his gruesome form and begins to despise himself as much, if not, more than, those whom he has revealed himself to, for his dreams of being loved and his belief that he is human are shattered continually by others. The monster laments at his foolishness and naivety in his pointless dreaming, and begins to crack due to the way this society has mistreated him, realizing he looks like a monster, and so a monster is what he will start to become. He starts to grow bitter in his isolation, saying of his creator, “. . .no Eve soothed my sorrows nor shared my thoughts; I was alone. I remembered Adam’s supplication to his Creator. But where was mine? He had abandoned me, and in the bitterness of my heart I cursed him.” (112) This speaks to the idea that after spending a considerable amount of time in complete solitude, after one’s ideals have been shattered, one can start to grow unforgiving and bitter. However, the monster holds onto the hope that, because he cannot change his outward appearance (which is the reason society made him an outcast), he will find someone who will look past it and recognise his gentle nature inside. Due to these last rays of hope, the monster continues to hold fast to his initial ideal of being loved by another, even as he feels himself slowly slipping into a state of misanthropy.

When one’s ideals are shattered by reality due to the influence of society continuously, one finally completes the transformation into a state of misanthropy, for this loss of ideals and dreams proves too great a burden to bear. After the monster begs Frankenstein to create a companion for him and Frankenstein agrees, the monster’s ideals are finally  being fulfilled. However, when Frankenstein ceases his efforts out of fear of his creation, the monster completes his descent into misanthropy, for his ideals have been crushed one too many times. In a very backwards way, however, the monster does, in a sense, fulfill his ideals of having some sort of connection with someone, for he tortures Frankenstein by killing his family out of a sense of vengeance to to his misanthropic state. He continues to have some sort of twisted relationship with Frankenstein until his death, in which case the monster is truly alone and his ideals have been completely crushed.

With this loss of idealism due to the reality of his circumstances, the monster makes the final descent into the state of misanthropy, subsequently becoming the monster that everyone had originally thought him to be. Ultimately, society crushed the monster’s ideals and hopes for having a companion in his life due to the truth of his outwardly gruesome appearance, causing the monster to hate the aforementioned society and become a misanthrope for good. 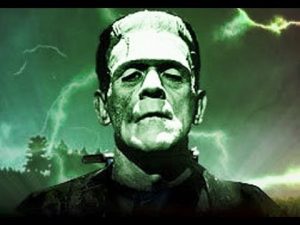