Discuss the idea(s) developed by the text creator in your chosen text about the significance of idealism and truth in an individual’s life. (June 2009) 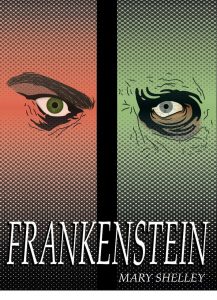 It is common to see individuals seek the validation of their ideals within society; however, this may lead to a contrast between one’s idealistic expectations and the hard-hitting reality that comes when facing society’s truths. Idealism is the way in which an individual is dependent upon their ideals rather than the reality of their situation, and when this reality is not aligned with one’s idealistic aspirations they often contradict one another.  Individual interaction with the truths that society inflict is often in opposition of one’s ideals, thus resulting in a disconnect between an idealistic individual and society because when one is reliant on their ideals the outcome of learning the truth, or the shattering of an ideal, may be detrimental. In the novel Frankenstein, author Mary Shelley develops this through the uses of Victor Frankenstein’s monster to convey the belief that he is unlovable as a result of his hideous physicality as an unnatural creation, yet he still believes in the ideal that he should be loved despite it all. That is to say that his ideal was to be accepted as a human by society, but his abhorred appearance – his reality – stops him from doing so, thus resulting in him adopting the monstrous tendencies that society saw in him.  When the truth sets in – he is rejected because his nature changes in accordance with society’s truths – and his initially good intentions, and desire to be seen as an equal by society, go awry and he creates havoc and destruction wherever he goes.

The impact of one’s ideals and the act of learning the truth, the shattering of their ideals, holds the ability to greatly impact an individual, as demonstrated through the monster and Victor. In other words, an individual’s ideals are easily impacted by the behaviors of others – thus, leading to a revelation of truth that can heavily impact an individual’s sense of identity. The monster, being created out of various dead cadavers and serving to remind Victor of his horrid actions,  is rejected and abhorred by his creator. This betrayal, as the monster’s first interaction with humanity, incites his character development; from the beginning, he has been abhorred by those around him and serves as the basis for his ideals – the monster is simply creating a fantasy separate from his reality because of the nature of it. The monster’s creation was blighted by Victor’s response to him, “I beheld the wretch – the miserable monster whom I had created” (58)  thus imbuing the monster with the ideal that he is to be abhorred. In his lack of knowledge the artificial being, however, craves a sense of human connection through his admiration of society, specifically the De Lacey family, thus demonstrating his innate desire to be loved.  As a result of his initial encounter with humanity, with Victor who rejected him, the monster starts his life in naive innocence where he lives unaware of society’s truths. The development of an ideal stems from this when the monster craves a sense of companionship and love from the De Lacey family.  The monster soon sees himself in the reflection off of a pond and he himself detests his appearance:  “… When I became fully convinced that I was in reality the monster that I am, I was filled with the bitterest sensations of despondence and mortification… (114) ; however, the monster still seeks companionship as he furtively observes the cottagers through a hole in his hovel.  It is here in the novel where the monster’s ideal begins to consume him; the monster has dedicated all of his actions to the achievement of becoming part of the De Lacey family, despite the realization of the truth – he has a truly monstrous appearance. Shelley is demonstrating how ideals can easily consume an individual even despite being shown the truth. That is to say that an individual can easily lose sight of reality in the pursuit of their ideals. However, the monster’s ideals pertaining to the De Lacey family provide him with hope, despite further removing him from reality. 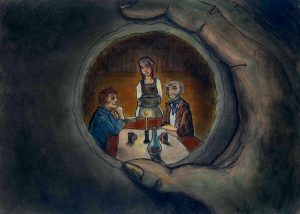 Through the rejection that the monster faces at the hands of the De Lacey family shatters his ideals causing a shift  in how the monster acts – the monster burns the cottage to the ground and the manifestation of this shift in character can be seen when he says, “ For the first time the feelings of revenge and hatred filled by bosom, and I did not strive to control them… I bent my mind towards injury and death.” (138)  By looking at the monster’s inability to be seen as an equal by the De Lacey’s demonstrates his disconnect with society because of his reality – that is his horrendous appearance. The monster’s ideals begin to degrade as society’s truths start to impact him; the De Lacy family has fled, in fear, of the monster – thus revealing how his identity shifts as a result of the family tarnishing his ideals. By nature, the monster’s curiosity to seek knowledge in order to better understand the cottagers, reveals his true intentions of understanding society despite society ostracizing him. Yet when the cottagers (society) abandons him it causes a shift in character; however, the monster still clings to some aspects of humanity as he rushes to save a girl from drowning in a river. The desire for interpersonal attachments may be a fundamental human emotion as it overcomes the desire for revenge, as seen through the monster and how he saves the girl.  Once again, however, the monster’s abhorred appearance causes him to be shot by the father of the girl he just saved. This demonstrates how his truth keeps him from attaining his ideals, instead, the monster must realize the imperfect and unattainable nature of his ideals in accordance with the truth.

In the end, the monster’s pursuit of his ideals has burdened him with an idealistic worldview which had furthered his monstrous tendencies, as his once pure intentions of understanding society in hopes of being seen as equal are diminished as the truth sets in. As individuals, we often idealize a life where we are unconditionally loved despite the reality of imperfection. But when one’s ideals and reality do not align destruction can follow. That is to say that when the monster’s ideals of belonging to society, exemplified through the De Lacey’s and the girl from the river, are completely juxtaposed by his harsh reality  it results in a shift that results in destruction; consequently,  this idea is furthered when the monsters last ideal – having a mate – is crushed by Victor, and the monster finally descends into the epitome of a “true monster.”  This idea is demonstrated when the monster says, “ Remember that I have power; you believe yourself miserable, but I can make you so wretched that the light of day will be hateful to you. You are my creator, but I am your master; – obey!” (167) It is at this point in the novel that Shelley is demonstrating the negative impact on one’s identity when one’s ideals and reality do not align. The monster’s ideals of becoming a functioning member of society have completely dispersed and have been replaced by a final ideal – to exact revenge on his creator. However, when the monster has achieved this he has no reason to live for his reality has been too far distorted during his chase and that his ideals and truths – his life – has diminished as  Frankenstein died. That is to say that through the attainment of his final ideal, the monster loses all will to live because his identity has died along with Frankenstein – who was the catalyst behind both the monster’s ideals and reality.

Through the character development of the monster in Mary Shelley’s Frankenstein, it is revealed that idealism – whether it is through the pursuit of ideals or the realization of truths – is integral when becoming a functional member with and within society. Society had nurtured the monster to be savage as his ideals were rejected and his reality was revealed; that is to say that by nature the monster was born innocent and pure but through the nurturing of society and their prejudiced responses to him the monster started to act upon the darkness inside of him. Society’s fear of physical deformities leads to the monster’s individual ideals to be crushed by the harsh truth which, in turn, led to the development of the monster’s former benevolence transforming into malice. If an individual’s true self is not accepted by society, for the mundane reason of appearance, one’s identity often becomes rooted in the labels that society has imposed. The monster’s realization that his ideals,  to seek compassion from others and be seen as an equal by society, are unattainable he enters a downward spiral where destruction was prevalent.  Thereupon, individuals often idealize a life enriched with compassion, nevertheless, it supersedes the harsh reality and truths of society, it is destructive.