The book Fairest is a young adult fantasy novel based on the Evil Queen from Snow White.The story takes place in a futuristic world where humans, cyborgs, androids, and a race of moon colonists(Lunars) all coexist. Levana (the protagonist) grew up in a poisonous household. She had the trouble of living with a cruel older sister who mentally, physically and emotionally abusive. She was grief-stricken after the death of her parents, Channary (Levana’s sister) took over the role of their parents as the rightful Queen of Lunar. Channary’s reign was short, and with Channary’s ascension, Levana began an unexpected downward spiral to becoming heartless. Not only does she impersonate ex-lovers to seduce her prey, she’s also manipulative, possessive, and selfish. 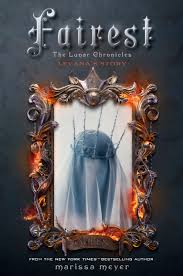 I was critically aware of the difference in perspectives based on the characters. I greatly appreciate Merissa Meyers efforts to give the readers an opportunity to explore the mind of our great villain Levana. The characters were relatable, I fell in love and empathized with them. For Instance, I knew that Levana was cruel and mean, but after reading this book, I was then able to comprehend the fact that she isn’t entirely evil. I learned that she was ones pure and as she grew up, was exposed to the corrupt society that turned her evil. I would absolutely recommend this book to anyone because of its sublimity.

3 thoughts on “Mirror, Mirror on the Wall”