The following is a personal reflective response to the short story “Black Walls” by Liu Xin-Wu. 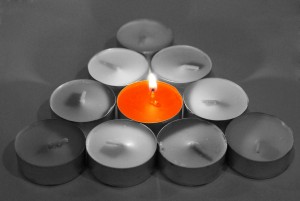 “Look at how a single candle can both defy and define the darkness.”
― Anne Frank

A cold world without colour.

Such an intense heat for such a grey world.

A staggering heatwave forcing a change of seasons.

Melting what once was until they become nothing.

Fading them to grey so you can paint them white.

The temperature is rising;

A transition from the cool of spring to the hot of summer.

A temperature provoking cicadas to rise from their slumber.

They resurrect from the earth, one by one, chanting their loud song.

A low hum of buzzing―

The candles catching aflame one by one;

Then knocked down again by the wind.

With a small blow of the wind, out goes the light.

And yet still my fire glows.

My flame sizzles with passion.

As I spread my light you press me down,

So I hold myself back.

You may change my flame,

You may freeze my flame,

You may blow my flame,

You may extinguish my flame,

You may even drown my flame.

But still shall I burn―bright and brilliant.

Crushing me with depression

In hopes to suppress my light.

But you will never contain me.

You can never catch me.

So I remain hidden among the grey.

I had a hard time finding inspiration to write this blog, but I was eventually able to gain some from a certain scene in the short story where a tenant’s son is described as a young man who does nothing but lie down in bed reading a book named , “The Lamp Without Light”.

The protagonist of the Black Walls is the quiet and consistent character of Zhou, who minds his own business and keeps and undetermined reputation amongst his neighbors. One day out of the blue, Zhou begins to paint the white walls of his room black, and his neighbors do not take too kindly to his decision.

“Mrs. Li wanted to go home and get her lump of a son to stop reading his novels and think of what to do. Perhaps he could bring Mr. Zhou to his senses, and even help spray the walls white again. White was so nice! Why should anyone want anything different?”

I think of white as not a colour, but the absense of colour. Mrs. Li’s reference to it being a lovely colour symbolizes how she, just like the rest of them, have been brainwashed under Maoism to appreciate that which is actually valueless; to appreciate conformity rather than individuality. Zhou’s choice to paint his own walls black represents his individuality, while the collective judgement of his neighbors represents society’s conformity under Maoism.

The very prominent theme of diversity vs. homogeneity is demonstrated through the use of colour imagery and symbolism. The black paint Zhou uses to paint his walls represents a divider among his neighbors. The contrast between the colours black and white are used to symbolize the struggle between diverse individualism and homogeneity. Colour is also used as a divider between generations. Liu uses “youthful colour” to transition from the past black and white Maoist period into a “bright” future. For example, on the second page of the story, there is mentions of a girl who sells meat during the week and becomes colourful on her days off. She is colouful despite her environment: she feels none of the pressures to conform to the dreary, concentrated past of Maoism and its social order. Here, the author suggesting that the frustrated, isolated, socially pressured individual self of the “black and white past” is now putting on a “colourful future”.

Cicadas are a symbol that especially stood out to me in this short story. Cicadas are also known to hibernate in the winter until their internal body “clocks” sound an alarm, from which they resurrect from the earth.  In Chinese culture, cicadas are regarded as powerful symbols of rebirth and change. They provide warning for when something is about to happen ― a signal from past to present, timing, surprise, and illumination.

Lastly, Liu uses youth and innocence to stagger the minds of the busy-body adults. Little Button is introduced at the end of the narrative, who completely stuns the past social order and overthrows the hypocritical Maoist social construction that ruled their past, showing vision of the future.

Black Walls is a protest against the idea of conformity through communism, and my poem shows the absurdity underlying the idea that an individual can truly conform to a “greater” society.