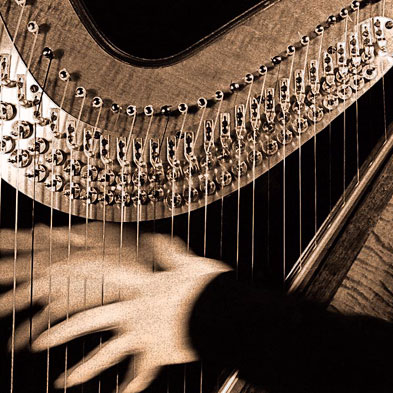 The following personal response is a short story inspired by Italo Calvino’s “The Distance Of The Moon,” in which a man fantasizes about spending a month on the moon with the woman he lusts after. When he does get the chance to stay on the moon with her, however, his fantasy is broken and this ideal he has created for himself comes crashing down around him. I explored that idea in the following short story, which examines the ideals of a young girl, who dreams of the glories that will come from becoming a harpist with the Royal Philharmonic Orchestra, and the consequences that occur as a result of this hopeless chasing of dream that could never have been perfectly fulfilled.

The first time I bled was the first time I held a harp. I didn’t play with things I shouldn’t have when I was a child, you see, and I was so very careful all the time to not get a paper cut because band-aids were not a luxury we could ever think of enjoying. It was small harp, one I could (with a struggle) hold in my hands and on my lap. Why someone was selling such a beautiful, magnificent instrument was a confusing mystery to my simple mind.

I, at the naive age of 12, had decided then and there, holding a second-hand harp in the front yard of a house whose owner’s names I couldn’t quite remember, that I would become a harpist for the orchestra that I had seen on the front page of the newspaper Father was reading last week, the Royal Philhar-something or other. My ignorance of the grandiose nature of this dream was not even the tiniest bit present in my mind, as I passed my index finger over a string the wrong way and cut it cleanly open.

When people describe the discovery of their love for something such as music, they tend to ramble about the beauty of it, oh, how it struck them so forcefully and so at once that they knew! They knew, immediately, this was their life! This black and white and massively inconvenient piano, or that obtusely annoying brass instrument that I can’t distinguish from another, and it just called out to them – this is not what I felt when I held that harpist.

I felt powerful. I saw a future in which I didn’t eat just two meals a day or wear the same set of old, tattered clothes for years at a time. I knew that this fragile harp, with it strings that seemed ready to break at any moment and egg white paint beginning to chip, was a way for me to be recognized and to be successful and, I secretly hoped with my tiny 12-year-old heart and crossed fingers, to be happy.

I convinced Father to give me money to buy it, as I lied that the yard sale organizer had seen my blood stain the fingerboard and forced me to take it away immediately. It didn’t cross my mind that, by doing so, my younger brother would only be getting a pair of worn socks for Christmas.

The scratching of the bow over the strings, Mother once said, sounded like the scraping of a three-legged chair across wooden floors for the first few months I was beginning to learn. Lessons weren’t affordable, of course, so I would walk over to the library once a week and sneak out of it with three thick books stuffed with techniques on holding the instrument and pages with faded symphony accompaniments by composers I had never heard of and never cared to remember the names of.

Every single time I played that harp, my fingers would bleed. I’m not sure if it was the simple fragility, paper-thinness of my skin, or how long I spent plucking at the strings, but I remember thinking, sadly, the only sure thing in my life was the presence of my red fingers accompanying the one-person symphonies I would create daily. I would spend two hours practicing every day, half my day at school, and then the rest of my time was spent working at the laundromat down the street.

I was saving up to buy a ticket to London, and after six years of practicing until I felt proud enough to even think of purchasing the train ticket I needed, I left my home with only a small bag of luggage stuffed with my finest clothes and my harp, carefully tucked into its hand-made case my mother had stitched for me some years before.

The concert hall in which the auditions were held at was more magnificent than I could have ever imagined. Deep brown wooden walls that reached upwards like hands and palms burnt with years of being surrounded by constant beauty, velvety red chairs that themselves seemed to shake with anticipation of what was to come, and a stage that felt, under my foot, as if it was moulded from decades of success and happiness and the blood from the hands of those before me. My hands shook as I stepped forward and introduced myself and the piece I was playing, and I could feel the own blood rushing beneath my skin almost demanding to be let out.

Without fail, as I started the song, my fingers bled. I heard whispers from both the adjudicators and other auditionees, but ignored them in favour of focusing on the next chord and the chord after that and so on. There was quiet applause, polite approval, once the last string had stopped humming.

Without fail, they contacted me the next day at the hotel I was staying at and offered me a permanent spot in the orchestra as one of three harpists. I was overjoyed, of course, and I did not hesitate to move out of my family home and rent a very small apartment in London. My family seemed happy enough for me, but I couldn’t help but think they felt negatively of this whole thing. I wouldn’t let their opinions, that I regarded as misguided, impact my feelings towards this new life of mine.

This was a new life, is what I would say to myself. Now that I was a professional, success and triumphs seemed to be imminent and ever-present in my mind. I would put masterpieces on display every night and receive acclaim and awards and love in return, and I would be able to live any way I wanted. I would be an artist and a creator and I would be appreciated.

Most importantly, when I played, I knew my fingers would never bleed again.

The first night of performances, my fellow harpists ignored me and looked at me with disgust in their eyes. The conductor refused to shake my hand when I shyly offered it, and I could feel no eyes in the audience looking towards me as the orchestra appeared onstage and sat down in our seats. My family hadn’t come.

The walls had turned from solid arms of protection to burnt iron bars that caged me within something I thought would be the perfect fulfillment of all my dreams. The dark crimson of the seats seemed to mock me for all of the desperate blood I had lost to get to this point, and the stage itself was cold and uninviting and terrifying. I felt sick.

As I lifted my hands to start my part in the performance, I forced them to stop shaking. If anything, I was reassured that my fingers would not bleed tonight. No, not tonight, they wouldn’t.

I plucked the first set of strings and waited, with held breath, for my next chords to appear on the sheet of music in front of me.

My fingers started to bleed.