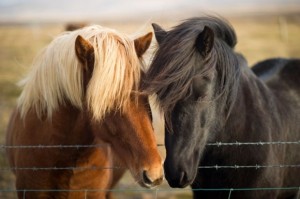 I was standing at the edge of a beautiful paddock, leaning over the white picket fence, and watching that tall grass ripple in the wind. It was almost completely dark now, but the summer air was still warm with the promise of wonder. I had been waiting for a very long time, when I heard what had to be the thumping of hooves pounding against the soft ground. I looked up only to be greeted by two very large and very beautiful horses, with Chris on the back of the taller of the two. He flashed me a brilliant grin.

I smiled back at him and reached my hand out to pet the nose of a very curious Duchess, who peered at me with wide, kind eyes.

“Hello,” I whispered to her softly, “I’m so glad to make your acquaintance. ”

I looked from one horse to the other. They were a magnificent sight; Duchess was a regal shade of black, and her pelt gleamed almost silver in the moonlight. Her eyes were full of untold stories, though not in a way that aged her–in a way that made her seem youthful and full of life. I noticed that every so often, when they were walking, Duchess would glance around to make sure that Firefly was still following her, almost as though she was making sure that he was okay. Firefly was equally as beautiful as she, however he was sorrel-coloured and slightly taller as well. He looked at Duchess in such a way that could only be described as love.

He smiled at me again.

“They’re racing horses,” he said. “Would you like to ride one?”

I nodded my head. I climbed over the fence and Chris helped me onto the back of Duchess who whinnied softly at me as I sat down. Christ, who had mounted Firefly once more said,

And then we were running so fast that I felt like I was flying. Chris lead the way out of the paddock and into a small forest, where the moonlight was dappled by the branches of birch trees. We ran. And we ran. And we ran. When we had finally slowed down, Chris began to tell me about the constellations–he even pointed a few out to me. After a while, I caught sight of a star that outshined all the rest in the sky. I was convinced that it was the brightest star I had ever seen.

Chris smiled softly. After a moment he said,

“You know, a long time ago, explorers used that star to help them get home.”

We sat in silence for a few moments.

Chris looked at me, puzzled.

“I don’t know what you mean, Vanessa.”

There was another prolonged silence. I was afraid that I had misspoken, that I had said something to offend or upset him. Just when I was about to apologise, Chris spoke very quietly, and very gently took my hand in his.

“You know, Vanessa, I think you are right.”

I could feel that something magical was about to happen. It was in the air, and it was in his eyes.

He spoke again, and when he did, I felt my heart hammering in my chest with anticipation.

“Vanessa, I–need you to come clean the dishes!!”

My eyes snapped open. I heard my mother calling me downstairs. My heart was racing a million miles an hour as I sank back down into reality. It wasn’t real. It was just a dream. Just a dream. But–what was he going to tell me? I realised that this was something that I’d never know.

And, the thing is, even though I knew it was just a dream, I couldn’t shake  the feeling that it had actually happened.