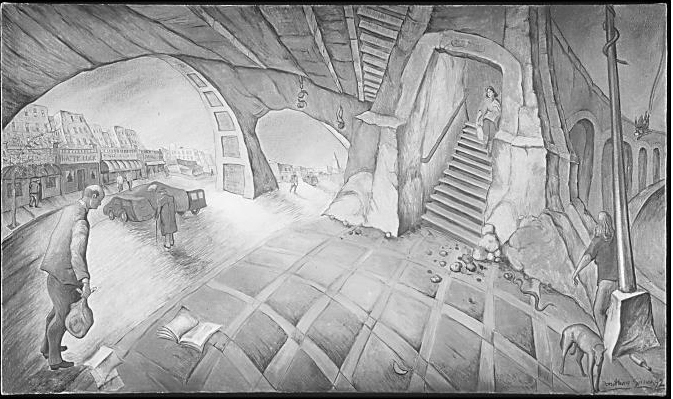 The following is a cold personal response to the picture featured in this post as well as this prompt: what do these texts suggest to you about the human need to make a commitment or renounce a course of action?

I was always fascinated with that painting I once made – the lack of color which I employed and the inherent gloominess of it. Everything was a shade of deep grey and it depicted the dismal world through a fish eye lens. It was a melancholic version of Bliss Street Station; people were walking drudgingly down the street, the station looked as though it had been destroyed in something like an earthquake and in the far right corner, superman was falling. I don’t know where that piece come from… I love Bliss Street because it represents all that I attempt to be – happy, bright, and magical. The painting sits in a corner of my room, untouched, covered with plastic sheets.

You see, all the other paintings I make are bright, colorful, whimsical. They make people joyous – they touch gloomy hearts and make them sing. They make the souls of lost, wounded people dance. And I hang them in my orphanage for the broken children of Sao Paolo to see. The way in which their eyes glisten with hope; the way in which their mouths curve up gently, forming a smile which reflects a joy they haven’t felt in years… It’s something else altogether.

Most of the children in my orphanage – Happy Luck – are between a few months old and around thirteen or fourteen years old. I found most of the precious little babies that I am proud to call mine in the dump, among rotting garbage, or abandoned on the side of the filthy road. And some of the other children, I found beaten up and bruised, huddling in a corner near a dingy shop. They were beaten by gang members for not selling enough “Maria Juana” or for being too “weak” to shoot another one of their family members. I do all that I can to take their minds off of their brokenness and the pangs of their realities. We played games, made food, painted, laughed and loved together. We were a family who knew naught of the traces of brokenness. We were happy, and we were lucky to belong to each other.

He walked in today, when I was sitting peacefully in my office, paying the bills for electricity and water. His eyes carried the weight of the entire world, and the weight of the world is not a joyful thing. His shoulders were heavy and he walked with a subtle limp. He had sweet, round cheeks that had lost all their color and had gashes in them. His head was bald and there were patches of blood which smeared the perfection of his shiny, little head. In his arms was a teddy bear, black with grime, and torn apart as a result of having to fight with other children on the street for it. His body was bruised and in one of his hands, hidden behind the teddy bear, was a gun. My heart sunk.

One of the ladies who worked at Happy Luck – one of my closest friends, Emilina, ran toward him and asked him what happened to him, if he needed help, etcetera. He simply looked directly in the eyes with a sort of coldness that I had never seen before and shot her. The echoes of the sound of that bullet penetrating through Emilina’s heart resonated throughout the whole building. Some children screamed, some cried, and some became catatonic. The traces of brokenness always seem to find a way to enter into the delicate hearts of my children, into the delicate heart of mine.

I remembered in that moment the way in which a man from a notorious gang walked into my house one night and looked coldly at my mother, the way that this child looked at Emilina, and stabbed her in front of me. I had no father in my life because he was shot in the middle of the street just shortly before I was born. He shot my baby sister too. But he saved me and dragged me to his house. He ruined my innocence and shattered me forever. And I don’t know how, but I escaped one day in the middle of the night and built this life for myself. I had forgotten about how broken I truly was and when I remembered, my mind dashed to that painting. I realized why I was fascinated with it.

It was because although it seems like my life was a direct reflection of Bliss Street, I am broken, shattered, a dismal mess. I am those people who were walking drudgingly, in pain along the streets. I am the rubble remaining of the buildings which were destroyed due to the earthquake, or whatever it was that had happened. I am superman. Falling slowly, exasperatingly from the sky – in the background, with no one to notice me – to my own destruction. I couldn’t do it anymore. I couldn’t be a source of light or hope for those broken, beautiful children. I couldn’t have my own orphanage… How could a broken person, a person like me, put the shattered pieces of a lonely child’s heart back together?