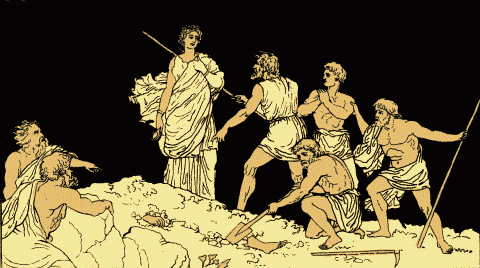 Discuss the ideas developed by the text creator in your chosen text about the human need to make a commitment or renounce a course of action. 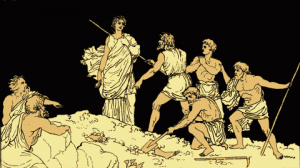 Death, one may argue, is an end to which nothing is proven. Yet it is infallible that we do not die without meaning or purpose, especially when one dies for a cause or a commitment they are entitled to keep. Commonly, it is seen that death is a punishment for the disregard of authority, begging the validity of authority’s value in the first place. In Jean Anouilh’s adapted Antigone, as the eponymous character first realizes that her brother must be buried, her need to pay a familiar honour forces her commitment to break the law which states that Polyneices’ corpse be left untouched on the battlefield. Through Antigone’s proposal, act, and punishment regarding the burial, Anouilh ultimately argues that when one finds themselves questioning authority, the need to honour her commitment to her brother and renounce the law is determined by her capability for sacrifice in order to fulfill a humanistic duty.
When human needs override the importance of authority, sacrifice suddenly becomes a catalyst in order to achieve one’s commitment. Initially, Antigone’s plight to bury her brother is rejected by her sister Ismene; the emotional torment between the two causes an argument debating the value of both respect for the dead, as well as the value of the law, and the King’s authority. The convincing of Ismene is fallible, though congruent to Antigone’s journey to achieve justice. Through persuading Ismene, Antigone can then argue that sacrifice is the currency with which one shows respect. Here she implicitly tells, through her pleading to Ismene, that their brother’s name and image, as well as their commitment to their brother, is greater than that of King Creon’s name and image. Though Antigone pleads, it is eventually concluded that Ismene simply does not have the capability for the degree of sacrifice needed, imploring to readers that a dutiful human is one that is rare, for it is a common human instinct to forsake a dangerous commitment if it means the self will be protected. The potential punishment that she might be killed for this act, in essence, describes the true faith Antigone has in honouring the old ways of the kingdom of Thebes and her family, unlike her sister.
After Ismene’s refusal to play a part in Polyneices’ burial, Antigone goes about the task individually; therefore, she resolves that her own humanistic, empathic ways must be pursued in order to adhere to her own beliefs. This rebellious act seals Antigone’s fate – therefore it is unquestionable that Antigone values respect for the dead over respect for authority, to which she believes she must die for her actions and faith. It is this usurpment of worth that furthers Antigone’s journey; she then sets out to bury her brother’s tainted corpse, and henceforth proceeds to be arrested in the act. Her sentence of death is one that Antigone is not afraid of – for having placed a higher value on duty and sacrifice over authority and law proves that death is no longer a consequence to her, but rather it is a reward. It is this reward that allows Antigone to be unbroken by the fear of punishment, for her actions towards her brother act as a means of her own self-fulfillment for the reassurance of beliefs. Her brother’s death, followed by his illegal burial, displays that sacrifice is of utmost importance in order to maintain not only values such as commitment, but also brings in elements of the gentility and promise that humans need in order to survive a life that will likely end in tragedy. Antigone’s determination in this act resolves that life is beautiful and must be lived, for otherwise conventions such as authority will overtake all that she is fighting for.
In the climax of the play, Antigone receives her punishment, thereby martyring herself in order to convince the people Thebes of the utmost importance of duty to one’s commitments, and the value of family over state. Antigone’s death, she hopes, will be by and for a riotous means. Death, in essence, likely would be a continuation of her commitment to her brothers, as well as to human nature. Deep within a human’s conscience lies the need to pay respect, as well as the need of revenge as a means of equalizing the degree to which the involved parties have sacrificed. Polyneices’ fate in war was equal to that of Eteocles’, thereby begging the question that their sacrifices for the city of Thebes was of equal proportion. Antigone, on the other hand, fights to the tooth and nail for her own death as well, equalizing all three sibling’s sacrifice and determining the duty to commitment to be of righteous sanction. Her death, now come, is the final end to her commitment and journey, ultimately establishing that her capability to sacrifice was more than sufficient at restoring the value of commitment over authority, proven by the riotous consequences of her death on her family, as well as the city of Thebes. Antigone now has righted her brother’s selfishness and tarnished name by sacrificing her life to restore the family’s honour. Antigone’s demise was one that determined that course of the play, and as well was the catalyst which convinced the other characters of the value of commitment over authority.
As Jean Anouilh argues, the doubtful mistrust of authority within an individual proves that the need to make a commitment or renounce a course of action lies within said individual’s ability to sacrifice. It is Antigone who, by her proposal, act, and punishment of her brother’s burial, seals her fate, as well as the idea that keeping a commitment must be put above the keeping of authority. Death being the penalty for the disregard of authority, though common, paradoxically feeds the flame that questions authority’s reign in the first place. We do not die for nothing, as Antigone teaches us, and yet there is still the antithesis argument that says death is meaningless – to which Antigone, herself, would argue is a shallow fallacy.