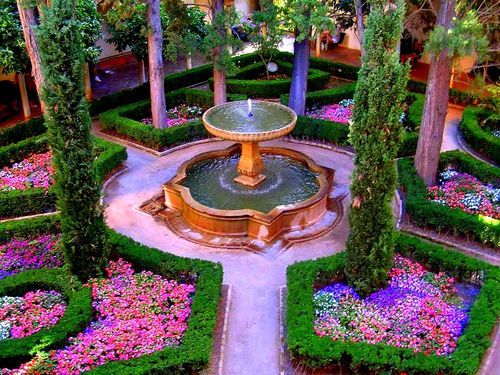 What do the texts suggest about the conflict between choosing a personal desire or choosing to conform?
Responding to: Diogène ou la Lucidité
By: Malika Daya

She sat silently on the edge of Jannat al-Arif, the Architect’s Garden, with tears of ecstasy wholeheartedly flowing from her radiant brown eyes, glistening under the serenity of the moonlight. Her hair swayed in synchronization to that of the breeze embracing her and her solitude while rekindling her soul’s connection to the roots of the Universe. The silence around her became music to her ears and nourishment to her soul. She became one with herself.

It all began the evening of Laitul-Qader, the Night of Power, when A’idah adorned herself in an elegant gown and beaded jewelry that belonged to her late-mother Aafreen, a lady of infinite courage and bravery. A’idah dreamt for many years of acquiring her mother’s fierceness, determination and passion, for she was the opposite- fearful, reluctant, and passive in regards to her own desires. Aafreen was a woman who condemned shame and therefore forbid any form of conventionalism. Whereas A’idah’s everyday life was surrounded by fulfilling customary expectations and upholding a façade of girl-like innocence and lady-like elegance. She became devoted to pleasing the world around her and with every sunset the flame of her soul stealthily began to extinguish.

Until the night of Laitul-Qader, when the flame of A’idah’s soul burnt into her impassive heart and enlightened her being. In prayer, A’idah found Aafreen calling out to her in a familiar garden, violently shaking A’idah to awaken her from the trance of orthodoxy her existing surroundings had imprisoned her in. “Wake up from this coma and search for your happiness. If you choose not to abide by your heart’s simple instructions, you are doing yourself a disservice and will forever remain a conformist like those traditionalists you live amongst. Do not be a coward, for you are being dishonest to who you truly are. Find your eternal happiness and chase it like a lioness does to its prey- without mercy.” As Aafreen slipped away like pain does in the middle of a good slumber, A’idah felt jolts of adrenaline rushing through her body as if she were electrified. And it was those explosions of adrenaline within her veins that became her stimulation in pursuing her internal aspirations, for they never ceased to exist and reignited the flames of her soul.

When day kissed night and dawn arrived, A’idah became bounded by fire. The tongue of a conformist was no longer present and the eyes of a witness turned into those of a prosecutor. Her husband’s wives, with whom she shared the harem, were appalled by A’idah’s boldness to insult the hierarchy of age instilled in the system of functionality, in which they all lived in compromise- or rather in sacrifice. The men were disapproving of her tenacity to study ancient literature and further intellectualize her thoughts, for she would become far too philosophical to oppress. The elders disdained her demands for respect and her husband despised her self-assurance. A’idah became a lioness in a world full of poachers.

In the matter of days, she felt the animosity towards her presence increasingly hindered all of her relationships. The life A’idah once lived in servitude was falling apart, but the fire within her was only further being fueled. Her mind and body had been caged far too long and finally freedom caressed her cheek like her mother caressed her to sleep- with tender love and hope. It was time for A’idah to depart from the life that never served her any purpose and find her way back to Jannat al-Arif. The garden of resolution awaited her arrival.

She gathered her belongings and bid farewell to the ladies of the harem, the men of the forefront, the elders, and her husband. No one stopped her, for they realized she had strayed too far from tradition to be brought back into conformity. Everyone bid her farewell in the name of Allah and A’idah left the palace with a fire in her eyes, a determination within her soul, and courage induced by her heart.

In the darkness of the night, fearless A’idah wandered through the streets of Cordoba unaware of where she was to go. The lanterns in the streets and gentleness of the starlight were evoking a sense of nostalgia in her spirit as was the Masjid, the mosque, she drifted by in a trance. The hushed streets were left deserted but A’idah did not feel alone. A lurking presence was anticipating her arrival on the trail she had manifested for herself; she could feel its energy amassing whilst she took steps closer to its origin. As she turned the block, a shadowy figure appeared. When she got closer her fate revealed to her, a slender man with piercing green eyes and melodious black hair with lips that took the rue of a rose. He gazed into A’idah’s earnest brown eyes, for in that moment it wasn’t their lips nor their tongues that spoke- it happened to be their eyes.

And with that, the enchanting man took A’idah’s hand and placed within it a map of which he sealed with a kiss and shortly after escaped into the smoky night. Within her soul she knew she had met with a Messenger, and within her heart she knew she would never see him again for Jannat al-Arif was her fate-bound destination. The mysterious man left her with new-found purpose and a map in which would guide her there, little did she discern that Jannat al-Arif was her paradise.

For the rest of that night until dawn, A’idah slept on the steps of the Masjid until the Aazan- a prayer Muslims conduct every morning in middle-eastern countries- awakened her, breaking all forms of conventionalism. She was oblivious to the glares of the old-fashioned elders, the wretched eye of the single and married men, and the bewildered stares from the ensnared women. A’idah’s only thoughts were those of Jannat al-Arif.

And so that morning she set on a seven-hour train ride through al-Andalus and an even longer voyage on foot to her final destination disregarding any hope society and tradition had of her. Her journey was strenuous, agonizing and occupied by adversity but nonetheless she made it. She arrived at the Architect’s garden of which resembled the one in her vision on Laitul-Qader and the Paradise she witnessed in the Mystery man’s benevolent green eyes. She knew she had finally found and reached her eternal happiness.

As A’idah sat on the edge of Jannat al-Arif with tears pouring out of her resplendent brown eyes, she realized that the only way to truly be happy was to forever bid farewell to conformity. Not just societal conformity but also to the confinement one enslaves herself in simply out of self-doubt. She alas in her entirety let go of any ruminants of doubt lingering in the depths of her being, for her journey was evidence of the power of courage and passion.

And so, the lioness escaped the world of poachers and found ecstasy in her paradise ruled by reason, passion, and courage, simply because of the fire ignited and alive within her soul.