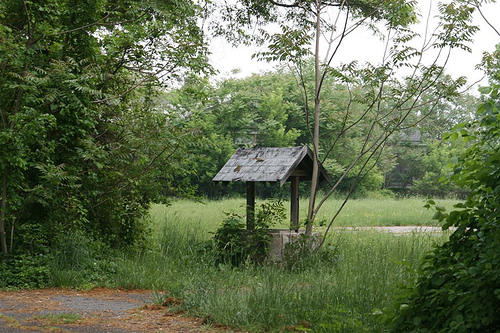 “Ryan! Not too close or you’re going to fall in,” his mother’s panicked voice filled the air.

He cocked his head to the side and closed his eyes, opening his mouth to retrace the next words, “Don’t worry mom, it’s a wishing well. It’s supposed to protect me.”

The well in front of him was bubbling clear. The pebbles of past wishes rested peacefully under-water, old desires forgotten or fulfilled.

He opened his eyes and looked back over his shoulder at the bench with a smooth granite surface and could see his mom leaning forward attentively, watching him with anxious eyes.

“Still darling, wouldn’t want to chance on it would we?”

The bench became dirtier as his mom vanished, taking the excited little boy who tossed in a pebble with her. The bench was covered in filth, abandoned cigarettes from past thinkers and empty beer bottles. Someone had scribbled instructions on how to get rich in slanted drunk handwriting.

“We should chance on it every second we get mom. Maybe one day it’ll actually happen,” Ryan whispered, flipping the small black stone in his hand.

The beautiful Wishing Well was now filled to the shallow brim with debris of a culture’s sickness- bottles, tin, paper, plastic- the soiled bandages of its aching unconsciousness. His heart pained at the sight. There wasn’t any room for wishes now. What did other children do, he wondered. How did they wish upon their desires and dreams if there was no room to do so?

He walked over the bench and cleared off the falling leaves that lay resting there, dead carcasses of the life that used to passionately be here.

He smoothed the pebble with his thumb, his elbows resting on his knees. What could he wish for? The wishing well was the place which gave what he asked and more. Could he ask for his mother back? The woman who had raised and fed him, and when he turned around to walk away, her bowed back was still bent to listen to a small boy who in her mind never ceased loving. Never entertained the possibility of being an adult.

Perhaps he could wish to go back in time. Back to a time when he was still her little boy, even though he was well over six feet tall now. Back to a time where the shame of being poor and struggling to put food on the table would never have happened. Back when he didn’t decide to run away from the accusations that he was a murderer. He thought back to the empty funeral, to all of those whispers as soon as he entered. He has been young, been rebellious and now he was paying the price. This would be the second funeral he ever attended. First, for the girl who because of his recklessness was now six feet underground. Second, for the women who because of his shame was now gone.

And then he had the same idea that occurred to him fifteen years earlier. Run. Run and never look back. Forget about the people who cared about him because they were empty souls just whipping past in his timeline. And though he wished the ground would open up and swallow him whole at the same time he wished the ground would be steady and he could just run and never look back.

But the ground was never steady. There were roots and broken branches that lay twisted and broken on the ground. Begging for someone to pick them up or at the very least toss them aside so they wouldn’t feel the pain of being crushed. Because sometimes being tossed away was better than having your world turned upside down. And sometimes the only option he could see over the horizon was the option that he might as well accept who he was and that at the end of the day he was nothing more than a coward who had nothing to offer to the people who raised him.

Yes, he would run. He would wish that his life would be easy and that his family would forgive him and that his mother who was now in heaven knew that little boys still made mistakes and that it would never be her fault.

But just as he put his arms to the side, ready to take the first leap into emptiness, a boy came. A boy came. He was six or seven, a stick dragging by his side as he hummed underneath his breath. He was searching the ground for something specific, his eyes attentive and alert.

But Ryan knew he wouldn’t find anything. In his hand, he held the very last pebble in the little area. Would he be willing to trade his wish for this boy’s?

Sure, if he had sacrificed everything else why not put this on the long list as well.

“Need a pebble?” He called out. The boy appeared startled and turned around to face Ryan. His eyes dropped down

to the smooth rock and then back up to Ryan’s face.

“Mama says I’m not supposed to take things from strangers.” He said slowly, moving closer. His eyes were focused on the rock.

The boy stopped and his eyes were wide, “You live at crazy Wendler’s?” He whispered horrified.

“Gee mister, I feel sorry for you. But…” He shrugged, “now that I sort of kinda know you, I’ll take that rock.” He stuck out his hand and waited expectantly.

He dropped it gently into his hand. The very last one. “I’m Jimmy by the way. My actual name is Jim but I hate it and John always picks on me for it, so I go by Jimmy. It was grandad’s name, you know?” He said proudly as he walked back to the well.

Ryan watched him with anxious eyes and leaned forward attentively as Jimmy got closer to the well. He was a small boy, a boy who could easily fall and would never be able to find his way to the top again.

Ryan got up and followed him to look down at the clogged spring. “I’m Ryan,” he told him.

“Why are you making a wish here? There’s a well that actually has water on the other side of hill.”

Jimmy looked up at Ryan, “Don’t you know Mr. Ryan? This wishing well is magical. Don’t matter if there’s no water in it.”

Ryan’s heart thumped. A believer. He didn’t think they were around anymore. Thought that kids were so caught up in technology and online gadgets and money that they never even considered a wishing well. The age for wishers was long gone in today’s world. Was it children who threw in the rubbish? Children who didn’t dream, or dismissed their own desires and tossed them down?

“Who told you that?”

“A nice old lady who used to sit on that bench. Whenever Tim picked on me, I always came here to get away from him and she told me about the well. Been here every day for…” he counted on his fingers, “forever.”

Mom. Mom couldn’t have me so she found another little boy. There was a chance that it could have been some other lady but in Ryan’s mind, clear as daylight it was his mom who had taught this boy the wonders of the well.

He saw himself in the wideness of the boy’s gaze. Saw himself running not away but towards his dreams and desires. Saw himself tending to his sick mother just as she had done to him.

And suddenly, fiercely, he thought that this boy could not in any circumstances give up his dreams. He could not turn out to be like Ryan. He had to be brave, had to face danger straight on and let it wash over him and make him a new, better version of himself.

He could be the guide that Ryan needed for his own life. He was, what Ryan had the potential of being.

“Hey, you all right Mr. Ryan? You look like you’re about to cry?” His voice was anxious. “Please don’t cry. Was it the thing about the lady? She wasn’t that old I guess. I mean, if you’re a hundred thousand million years old you probably look like it but-“

Ryan shook his head, “It’s not that Jimmy.”

He crouched down to Jimmy’s level. “You’re absolutely right about it being magical,” he choked out, his throat clogged by the truth he was finally letting lose. “No matter how old you may get, never forget that. Don’t let the things around you, especially hard things, stop you from dreaming.”

“It is magic, I’m not going to forget that.” He looked up at Ryan confused, “but you look sad,” he took Ryan’s hand and placed the solitary pebble in his palm. “Maybe you should have it instead. I get cherry pie today anyways, so it’s a good day for me.”

I wish…I wish to be clean. To be free. To lead a life of bravery, not cowardness. I wish for hope and change and dreams. I wish for a life of living, not remembering.

And then he let it go. Heard the empty clink as the pebble hit a broken bottle.

“I know this well is magic but I really would like to see my rock drop in water.” Jimmy said wistfully, looking at the broken well.

Ryan looked down at him and smiled. “Well, it’s a good thing you’re talking to the person responsible for keeping this well in tip top condition.”

“You’re going to fix it?” Jimmy asked a smile lighting up his face. But then his face got serious and he gestured for Ryan to bend down, “just don’t lose the magic okay?” He whispered in his ear his voice worried.

Ryan looked at the little boy, and felt not defeat, but strength. Felt not weakness, but power. Felt not despair, but hope.

“I wouldn’t dream of ever losing this magic again. It’s here to stay.”

And as they walked away, the solitary pebble teetered before falling down, past the bottle, past the crumpled notes and trash and landed on the bottom. It sat there glistening in the faint light. Turns out, underneath all those broken things, the water still somehow managed to get through, and it gently washed over the black pebble, turning the wishes to truths for those special few.