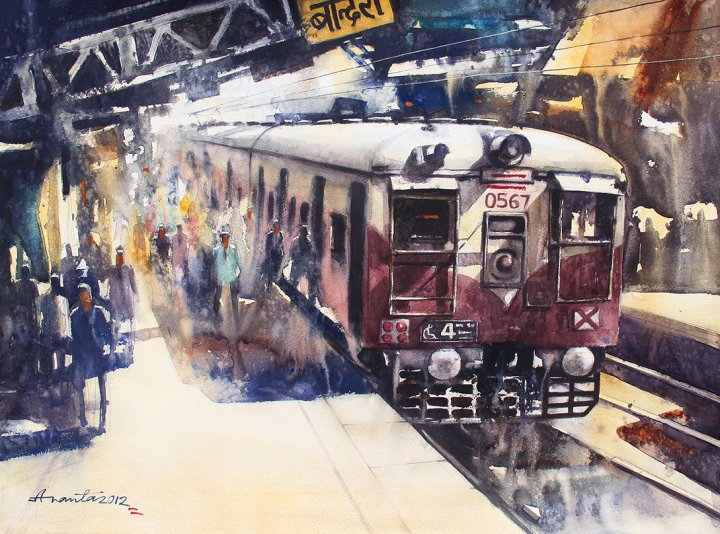 When I was twelve, my father became suicidal. He used to run fiercely to the filthy train station of Andheri, Mumbai in the hopes of killing himself. He used to steal bottles of unknown medicines from the ramshackle store beside our home trusting in the promise of death knocking on his feeble body’s door. And to his chagrin, I always rescued him… I don’t think that even his ghost would forgive me for that.

Daddy ran a business; he sold spices and pickled vegetables to the South Indian population of Mumbai. He was the most successful man I have ever seen – to come from a meagre, isolated village and work in the city was not a little thing. And the fact that his business was one of the biggest in all of Mumbai was simply awe-inspiring. To say the least, he accumulated plenty of money, yet he was humble and rooted in his identity enough to send money to all his family members every month. That was his problem. He was too simple-hearted, too gracious; he put his mother and his brothers before his wife and his five children. He let them take advantage of him and his wealth. He cleared the stage of his life to make room for depression and suicide. He set himself up, allowing them to consume every cavern, every crevice of his soul. And it was his youngest brother who acted as the devil, delivering those dreadful things to my father.

Anil Trivedi was his name – although, when I usually tell this story, I say that my grandmother should’ve named him Lucifer instead. I no longer hold him to be my uncle nor do I have any respect left in my heart of hearts to call him a member of my family… But he was my father’s favorite. Of all his family members, daddy sent the most money to him. He spent the most time with him. He neglected me and my siblings all for the sake of his brother. Instead of coming to the temple with us on Saturdays or coming to watch my school plays or even watch my younger brother’s cricket match, daddy would find his way to Anil’s house. There was always an excuse: “he just got promoted at work… I must go congratulate him,” or “he needs help fixing his broken laptop.” But didn’t we have things we wanted him to celebrate with us? Didn’t we need help fixing broken things – fixing our broken selves? I felt like I no longer had a father. I only had a stranger who dwelled in the same house as me and acted like he had some significance in my life. Not a father.

One day, Anil showed up at our house. I remember fuming with anger, so much so that when I heard a tea cup shattering, I didn’t leave my room to see what had happened. I remember hearing a husky, male voice yelling while a woman wept bitterly yet quietly. He was threatening mama.  He was threatening to harm her along with daddy if she didn’t surrender to him the file which contained private information regarding daddy’s business. Mama didn’t understand and so she allowed her eyes to become geysers, spewing with water.  She always used to do that when she was overwhelmed.  Mama didn’t know what she was to do and so she allowed herself to give in. And she always used to do that when she was conflicted.  Mama let Anil’s rough hand slap her rosy cheek. But she had never done that – she had never allowed anyone to do such a thing without putting up a fight, yet she simply fell to her knees, allowing the shards of broken glass to penetrate through her skin. She became catatonic and remained that way until the servant woman strenuously brought her to her feet again.

When daddy came home from work that night, he begged and pleaded with mama to inform him about what had happened but she wouldn’t break. She didn’t utter a single word to him or to any of us that night; she simply fell into a deep sleep from which she never recovered. It hit my father with great impact and force. He whispered in my ear as I fell gently, gracefully beside mama’s lifeless body: “I feel like I was running with all that was within me into a wall made of steel, and now there is nothing left within me. Only pain.” I looked deep into his coffee-colored eyes and saw that it was true. His eyes were void. And shortly after, he left for Anil’s house. He said that he needed to be comforted and the only comfort he could get was from his youngest brother. But couldn’t he see that we, too, needed comfort? That he was the only source of our comfort?

As he was walking drudgingly to Anil’s house, his eyes fell upon something that they never should have. His shop. Naturally, he went inside to see how business was that day… But how I wish he didn’t. How I wish that his feet would’ve kept on moving forward, that his head would’ve kept looking straight at the road in front of him. But they didn’t.

He approached his most trusted employee and as the words escaped his lips he found himself smiling gently, with his sorrow-filled eyes, “Bhai, how are things going today?” The man stared plainly at my father and said, “I didn’t know you were handing off your business to Anil, boss. But nevertheless, congratulations. You’ve worked long enough.”

And at that, my father found himself sprinting like a madman to the Bank of India. He pushed through the crowd of men and women standing in line, ignoring hurling their abuses and spit at him, and stood face to face with the bank-teller.

He thrust his bank card at the solemn man behind the desk, “Bhaiya, I want to know the amount of money remaining in my bank account. And check my business account too.” He shoved another card in his face. My daddy, who was never a man of patience, tapped his fingers violently as he panted like a dog while the bank-teller leisurely looked up the amounts left in the accounts. The solemn expression seemed to be etched on his face, “There’s nothing left in the business account, sir. But there is still five thousand rupees left on your personal account.” My father, consumed by rage, began to pull at his hair, “How could this happen to me?! Where did I ever go wrong?” He continued to yell those same words, at the top of his lungs, until the security guards dragged him out of that dreadful place.

From that time, my father began running to the Andheri train station in order to jump in front of a train and put an end to his agony. He began stealing bottles upon bottles of potent pills in order to overdose on them and escape the torture and torment.  And I – I became my siblings’ mother and father. I became the one who stole vegetables and fish from markets; the one who was beaten by police and shopkeepers when I was caught; the one who dropped out of school at the age of twelve. I became the one who always saved my father. Except once. One day I was only a minute late… But a minute can make all the difference.

I wonder how Anil feels. How it feels to have all the money and respect while your brother’s children are starving with only five thousand rupees. Five thousand rupees can only buy three weeks’ worth of food, electricity and water for five children. I wonder how it feels to have such a lust for money, such a lust for respect… To have such determination to the point that it can turn five children into orphans…

I was only twelve.