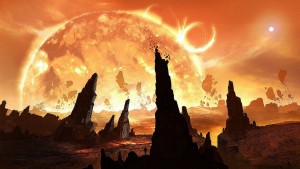 “In a world of infinites, the only constant is change.”

Some had called it judgement day.

Many had gathered in front of all manner of theological representations, on their knees, hands outstretched to the sky, tears streaming down their faces, as they welcomed the event, believing it to be some divine intervention from their savior.

Others kneeled at pews, in small families, waiting for their messiah to come and strip away their mortal souls. While some immediately grabbed shovels, and dug shallow graves, while explaining to their distraught children that they were going to be fine.

But there were few who congregated in droves, decimating shelters. “Suffer for your sins. The Lord demands your soul for repentance.” That became their mantra, wailing about death, and hell fire that awaited any poor soul that refused to prostate before God and his anger.

Ava thought that they were crazy, insane, loony and that anyone with the mental maturity would know exactly what it was.

The end of the world. Apocalypse. Annihilation.

The scientific community had a more softer word for it. They called it “Purification”, as if it were just the cleansing of the earth and not the extinction of humanity. It was softer. A kinder, gentler, and inaccurate representation of what was actually happening; a treading of the toes in a busy place rather than a scrawny man screaming on the curb about the end of days, froth spilling past his chapped lips. The media were elated, and unwilling to speculate on the notion that death would be possible. Everything would be ok. As long as you get to a shelter on time. Everything would be ok.

More people died killing each other for a place in a shelter than the first wave.

In the days preceding the announcement, Ava wasn’t sure how to take the news in. She was in her mother’s house on January first, squished on the edge of the worn, floral couch by her cousins, resisting the urge to plug her ears against rising voices of her mother, father, aunts and uncles. Her frazzled mother spoke frantically on multiple phones, attempting to get her family, and extended family in shelters. Or at least into sturdy domiciles that might be able to withstand against the coming storms.

They were supposed to have a month to prepare.

It was a horrifying heat. Hotter than anything that Ava knew, came in one searing, bright light that washed over the planet, incinerating anything above ground or not in protected shelters into blackened shadows on the pavement, the asphalt a bubbling soup of black, writhing in the ground.

Next came the earthquakes. Planet-shattering quakes that seemed to split the earth in half, deep enough to the core, allowing lava to spew out in sporadic bursts, far enough to cool into ebonized spires, despite the heat.

The hurricanes didn’t come after the second wave decimated the southern hemisphere. All radio contact with the East, and including, Ukraine, Estonia, Spain was lost. Multiple sinkholes appeared, submerging multiples cities into the land or water. Paris, Berlin, London, and many others fell. For once, the world was silent. Silent enough for the rest of the planet to hear the screams of the poor, unfortunate souls.

Several hours later, the third wave hit Europe, albeit by that time, Ava was too feverish to comprehend the lost of lives in such a populated place, still in the living room, curled up under a coffee table that was somehow holding the weight of their house up. She was pressed against the backs of her mother and uncle, soaked to the bone from the sweat that pooled underneath. She was too feverish to comprehend that her dying mother and her brother dragged her under the coffee table, so that she may live, both screaming into a broken phone for someone, anyone to get them.

Ava couldn’t remember who got her or when.

She floated in and out of consciousness, unable to see or smell the almost-overpowering scent of sulphur, blood, charred flesh and dust. Or the skeletons that clawed at the sides of the armoured cars, pallid, burnt skin stretched over their bones. Later on, did she learn that her childhood bully pulled her out of the wreckage, and tossed her into an envoy to a dilapidated battle fort off the coast of England.

But something went wrong.

Perhaps it was chance, or like the religious people, had the workings of a divine hand.

She had woken to the feeling of the envoy shaking violently, the sounds of flesh hitting the sides of the metal car, too much like the sounds of someone being run over. She glanced out the window, and immediately recoiled. The skeletons had managed to stop the car, placing sharp objects under the wheels. All were missing hair, sunken eyes, and missing parts of their bodies. Somehow, some of them had some of their faces melted away. Their lips slid over their mangled teeth, enlarged by the blisters. And all carried weapons, pipes, crowbars, knives. They wouldn’t stop staring at the car hungrily. Ava screamed.

Or rather tried to, feeling her throat walls rub against each other painfully. They managed to pry the door from the hinges, fueled by inhuman strength, at the prospect that this specific envoy was a food car. Once they saw only owl-eyed people, cowering in in the corner, they growled, stepping to the side, allowing a man with a gun through. Ava was on the ground. She did not hear the gunshots. Or the bodies thudding next to her. Or the sobs of mothers. The shrill screams of children. She didn’t hear them at all.

And when a violet-eyed stranger, roaring with an almost demonic quality, standing over her with an almost insane light, clutching a rifle in his arms, Ava smiled a bloody smile.

She hadn’t shed a single tear.

She hadn’t cried when the skeletons dropped one by one, too thin, too pale and stripped of their belongings by the violet-eyed man. She simply stared, hands clenched into fists, heart dropping as the man turned to look at her.

After a few moments of contemplation, he held out a gloved hand, and she took it gratefully, allowing herself to be gently led out of the envoy that started to stink. Without a word, the man turned, and started to walk away, pausing to look at her before averting his gaze, and continuing on. Ava breathed the scent of death in, and steeled her resolve, scampering after the man.

At the sight of his gleaming eyes, she shrunk in fear. The man stared down at her, and sighed, shrugging off his coat and offering it to her. Ava took the coat without a word, a brief moment of amusement lightening her steps, as the coat seemed too big for her. They continued on their way, not really speaking, not really breathing, but just there. Two lost souls on a journey.

They still called it judgement day.

Ava still thought they were crazy.