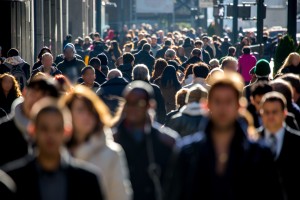 We had packed a lunch. We were going to meet some people for lunch. We were stopped at a red traffic light.We were in one of two lanes of traffic heading in the same direction.

As we were waiting at this traffic light, listening to the radio, out of the corner of our eyes we saw a guy walk halfway across the crosswalk. He stopped once he had reached the middle of the two lanes and proceeded to walk down the middle. He looked to be in his early to mid-twenties. He had a soft expression and his eyes remained, for the most part, averted from all of the drivers’ eyes. You could see the stubble on his face; grown almost to the point where it was so long that you could no longer rightly call it stubble. A shadow of a moustache and beard covered his face, but it was obvious it had not appeared because the owner had wanted it to. His face was smudged with some dirt, though it was evident he had tried to clean up the best he could. He wore a t-shirt and a pair of jeans. Both looked fairly worn, and as though they had not been washed for a while. As for any other possessions, he had a small backpack on his back that looked as though it had been engrained with dirt. As he approached and passed the cars, you could feel something.

I think it was the human instinct or the “gut feeling” everybody talks about having. It was that deep “something” that was pulled up from the depths of your soul that influences how you feel about a person or situation upon your first interaction with them.

There is one word, and one word only, that I can use to describe this young man. He epitomizes this word; without parting his lips to use his voice, without raising a finger to do anything to convince you, and without any sort of direct interaction with anyone he encounters.

Though any interaction we might have had with this man, and complete stranger at that, was separated by a thick piece of glass, we were also separated by a world. We were in two very different worlds that somehow managed to be in the same time zone.

As he passed each car, he would quickly glance up and make eye contact with the driver. His head would then snap back down to gaze at the ground with humility, and with a small nod that was intended to be directed towards the driver, he then moved on to the next person. He repeated this with each car and each driver on either side of him. Both of his hands were gripping the sides of a cardboard sign. It read:

Before he reached our car, my mom turned and asked us if we thought he needed it.

I often overhear people talking about the homeless problem. You often hear of people who are skeptical as to whether or not they should help those who live on the streets. They wonder whether that homeless person is “worthy” of their help, and they are mistrustful as to how they will use the money. Drugs? Or their next meal?

Some argue that living on the streets is a choice. And if those who live on the streets wanted to change their life, then they would. Others might offer that sometimes one needs an opportunity; they need that small, extra something to help them get through until they can manage to pull themselves back up again.

When deciding whether or not to give (specifically) money to a homeless person, it isn’t that you question whether or not that person is “good” or “bad”, and use that answer to determine if you help them or not. It is simply the fact that one can easily become skeptical of others actions, as they are a complete stranger. In this particular situation especially, because society has created a stereotype for this population. And although this stereotype may apply to some of the population, it is not fair to let a stereotype define the entire group. There are always exceptions, with anything in life.

You have to choose what you believe in this world, and you have to let your instinct guide you in these choices.

By the time that this man had reached our car and had sheepishly made eye contact with us, we had all froze, we didn’t know what to do.

The lines engraved on his face were like a map of his life; a map of the experiences he had encountered, the battles he had fought, the sights he had seen, and the emotions he had felt. His eyes were wide, soft, but seemingly lost. Worried.

He continued to walk inbetween the two lines of cars, step by step in his beaten up shoes.

The light turned green, and my mom continued to drive. Tears welled in my eyes.

The music was turned down, and the silence began to shout at us.

As we spoke, our voices were all filled with regret, it was evident that we all felt ashamed that we had done nothing to help this young man. We all admitted that there was something about this guy that had, quietly, genuinely, screamed for help.

I think the encounter has long since faded in their memories; replaced with more memorable recent ones.

But not for me.

But more than anything, I wonder why everybody who doesn’t know him and is seeing him struggle, won’t help him either.

I’ve decided that perhaps this is because we all claim to be too busy.

We are too busy and absorbed with our own problems, that we are unable to open our hearts to the apparent pain of others.

Every stranger you pass on the street, you must realize, has their own complicated lives with their own struggles and pain. However, I think it’s ironic that those who we can physically see suffering, firsthand, we choose to ignore.

We live in such an incredible country, in such a rich province, and in such a developed city. It seems that because we live in such a socially advanced place, there shouldn’t be a problem where people are struggling to get by. But why are there people suffering like this?

We are all too busy.

It’s not necessarily the fact that we don’t want to help others. Of course humankind naturally wants to fix others problems, and eliminate the suffering of those who are closest to their hearts. It’s just that the people who manage to slip between the fingers of today’s society, manage to slip through unnoticed, because the rest of us are too busy with our own lives. Life distracts us with all it presents for both ourselves and those who are very close and dear to us. But that makes us blinded as to the suffering that life has decided to present others with.

Often times we are so busy trying to improve ourselves, that we become obsessed with becoming this “ideal” person that we have in mind. This blinds us from the real life opportunities we are presented with; opportunities that allow us the chance to prove that we are all of these wonderful and beautiful things, by applying them to our lives with authenticity, selflessness, and pure genuineness. However, we are too busy creating this 2.0 version of who we are, and trying to convince and make ourselves believe that we are this version of ourselves, that we are only ever able to become this person in theory, not in reality.

Because we are all too busy.

I think once we realize this, we think back to the times where this might have applied in our lives, and an overwhelming sense of regret and guilt comes over us. It might feel as though we were so selfish and wrapped up in our own lives, and with our own problems (that in retrospect seem so small), that we didn’t take the time to realize the obvious pain that those surrounding us were facing. But although humankind can be incredibly selfish, humankind is also known to be incredibly selfless. Perhaps what we need to do, is at times shift some of our selflessness over to those whose suffering we wouldn’t have typically noticed.

Why wouldn’t we have noticed?

Because we were too busy.

To this day, I still wonder about this young man. I think I will always wonder where he is, about who he has become, and about what his life has become.

I hope he is okay. Because if he isn’t, I would find it impossible to not feel personally responsible.

To this incredibly humble and struggling man:

I am so sorry I was too busy.