Faith is to believe what you do not see; the reward of this faith is to see what you believe.

This I believe…—what? Here I am, 5:00 pm Sunday night, 2 hours before my blog is due and completely stumped. The entire weekend I had thought I knew what I was going to write about.  This I believe…believe in your own faith. It was a risky theme; did I even believe in my faith?

More confused than ever, I dropped everything relating to the assignment and turned my attention to my messy room.  I thought I might as well clean up and do something productive while I waited for a spark of inspiration to come to me. Unfortunately for another 45 minutes, nothing came. As I was gathering my scattered papers, binders and writing utensils that had somehow found their way under my bed, the thick binding of a decently sized book caught my eye. It was my Bible, a vast text I had owned since I was a small child and had disdained for the last few months. It had become a thing I would only take with me to church on Sunday, and return in its exact position as soon as I got back. Other than that, it went no further distance. I had treated it like it was an object that had been forced upon me, even going to church on Sunday was purely because my parents took me; I had no real will to actually go there. Although there were many enjoyable passages and admirable stories to read from the Bible, something about it all just baffled me. I had grown up all my life being taught that this was the way, but was it really? My mind suddenly wandered to group discussions we had had in class before concerning the novel Night.

Where was the proof? How did they actually expect people to believe such tales? What was the point of it all? Did God actually exist? And if he did, how could he let such bad things happen? If God really existed couldn’t he just force everyone to obey him?

I sifted through the pages of my Bible quickly, catching the colours of passages I had highlighted over time. All of a sudden, a small sticky bookmark caught my eye. I turned to the place, ending up in Genesis 6:3. The verse was highlighted bright green, indicating a recent highlight. It read, “Here I am! I stand at the door and knock. If anyone hears my voice and opens the door, I will come in and eat with that person, and they with me.” Revelation 3:20 (NIV)

I had read this verse many, many times before. It had just been some verse to me. But somehow today it made sense to me on a whole other level, probably because I was searching for something to type onto my blog. I quickly went to my laptop and typed the verse. I read it over and over again until something came to me.  Slowly thoughts began to form in my head.

If God was really there, he didn’t force anyone to obey Him, even though he totally could have if He wanted to…so why? Because of love…? Who would believe such? In a God they couldn’t even see?

I sat for 10 minutes, the reason not completely sinking in to me.  The Bible was full of analogies and metaphors that sometimes made no sense to me, but this time I was truly dumbfounded. I didn’t even know if this was true. I wasn’t sure if this actually made sense or if it provided me with any proof. I glanced at my clock and the time read 6:30. I was running out of time. I clicked my chrome browser and googled the words, “What is faith?” The first thing that popped up was Hebrews 11. The title itself was “What is faith?”, so it was the first thing I clicked. The very first verse read, “Faith means being sure of the things we hope for and knowing that something is real even if we do not see it.” 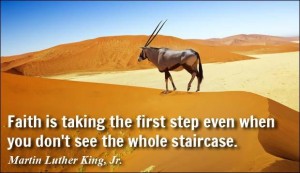 I scanned the passage further and came across verse 16 which read, “ But they were waiting for a better country—a heavenly country. So God is not ashamed to be called their God, because he has prepared a city for them.”

Also, verse 34, “They stopped great fires and were saved from being killed with swords. They were weak, and yet were made strong. They were powerful in battle and defeated other armies.”

In those verses, I saw something that made me come to a great realization.

“But they were waiting for a better country.”

“They were weak, and yet were made strong.”

I concluded that it didn’t matter whether there was evidence or not. All I needed to have was faith. That faith would provide me with the comfort and ease of heart I needed.

Be faithful in small things because it is in them that your strength lies.
-Mother Teresa

I suddenly realized that this was probably why many of the Jews maintained their faith in God and kept praying to him. God was a symbol of hope for those who believed in Him, a hope towards a “better country”. Whether he really be there or not, he served as a tower for those who were weary to rest their heavy-laden heads upon. People ran to Him when they were afraid, and he gave them a feeling of safety, peace of heart, and a form of strength to continue on when they decide to put their trust in Him.

This thought itself reminded me of another verse,

“For the LORD is a strong tower, the righteous run into it and they are saved.” Proverbs 18:10 (NKJV)

Had it all been coincidence that I had found those passages? Or perhaps it was meant to be—to revert me upon the correct path. I choose the latter. The Bible may have been a book of instructions to follow, but they were meant to lead me in the right direction so that I could live a better life. Simple things like loving your neighbor, being a good person. There was certainly no harm in believing in those things.  I am not here to preach, or to convert, I am here to state what I believe; have faith. 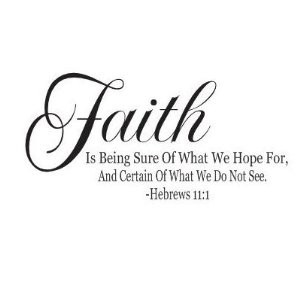 4 thoughts on “This I believe…BELIEVE”