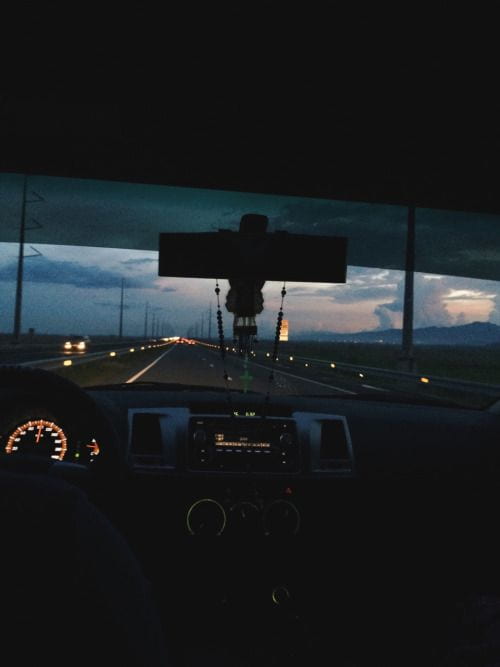 “…the impact of separation in an individual’s life”

The days were hot and the nights were brisk on those seemingly endless roads. It was just me, my mother, and my father in the car. I sat in the backseat of our station wagon doing all a teen could do whilst whittling away the hours. On those roads between the future and the past I watched the endless clouds as the sun set over the canola fields. But the longer I was trapped in that car,  my desire to vanish became increasingly stronger than my desire to appear. Staying quiet was the priority – anything could set off my father.

I’ve sat alone in the backseat my entire life and through those years I could never decide which parent I should sit behind. Behind my dad I would have to endure watching my mother as she was battered with insults and condemnation over her every action, no matter how miniscule. Tears would well up her eyes and I was left to watch with the same pleading gaze that she gave my father. Behind my mother I would have to face the insane man who shattered souls with a penetrating glare until there would be nothing left but a corpse. At least there I could look away, never making eye contact. There I could pretend that I couldn’t feel my mother’s pain through the leather seat. That day, I sat behind a corpse.

Following wherever the highway took us made us feel like we were falling – falling in some kind of perpetual motion. Harrisburg–Roanoke–Charlotte–Atlanta. Mornings bled into nights and the nights into cheap hotel rooms. Every day a new sight to see but they all blurred into one. Everything felt new – everything was changing. But stuck in this car the tension seemed to be the only constant. Some would say you could “cut it with a butter knife”, but you never need to. It always manages to seep into your skin and make the hairs on the back of your neck stand tall – senses always on guard.

We left from Hartford Connecticut in search of a job… a job for my father. They won’t tell me why but I don’t need answers to understand why a man like him would be fired. Everything was under constant control of my father. That’s how life was, a constant aggression towards every minor inconvenience. This anger was expressed through his entire physique: his brow would come down, eyes harden, and his lips would crack exposing sealed teeth. Today, I noticed that his veins swelled out of his right hand as he clutched the steering wheel and yelled to the mother I couldn’t see.

She was all I really had left. Everything else was lost from me over the course of a week. My friends, my home, everything. I never felt so out of control in my life. Probably because I never needed to as my mother was my second hand in that everything. Before, I was a kid without responsibility I would run, play, and hide. But now all I ever do is hide. My father has tormented my mother and, now that I’m older, he terrorizes me the same way. My mother and I are connected – not by love – but by fear.  Our souls forever in a perceptual confusion. All we can do is hide.

That day I sat behind my mother. But over the course of the trip and through everything I had already lost, I no longer needed to see her eyes to understand her soul. Through the seat I could feel my mother. The mother I had lost and the soul which had been destroyed. Everyday it began to get harder and harder to feel it and I already knew it was waning out of existence with a desire to vanish.

But that day, I sat behind a mother that I could no longer feel. There was an anonymity so deep that it had no bottom. It was suffocating – realizing I had lost the last thing I had. And I looked at the reaping eyes of my father and mirrored his rage. Everything I had lost – everything I had endured – everything I felt came pouring out. Taken off guard my father responded the only way he knew how to. He let go of the steering wheel. Turned around. And was about to grab me… But in that moment his glaring gaze vanished in a flash of light.

The night sky was illuminated for an instant.

And then all was still…

Do you hear me mother? Do you hear me moving through? Somewhere between the future and the past I awoke. The headlights of another car cast shadows within ours. My father’s limp arm hanging on the steering wheel, veins retreated. And covered in shadow was my mother in front of me. Limp with hollow eyes. Emptied of soul.

One thought on “Something Lost – Polished Personal (Creative)”