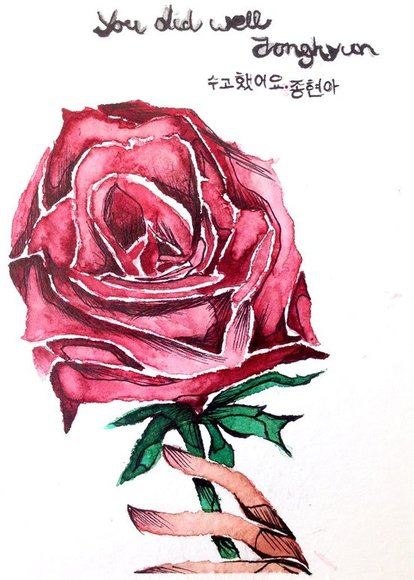 Kim Jonghyun released music as a solo artist, composed songs and lyrics for himself as well as for other singers, and was a member of the Korean boy group SHINee.  He passed away by suicide through carbon monoxide poisoning on January 18, 2017.

My English diploma prompt involved the concept of separation and it’s impact on an individual; I wrote about my experiences on the day of as well as the entire week that ensued after his death.

Despite the fact that a month has almost passed, he lingers in my mind. I have decided to incorporate lyrics from songs he has written and notable quotes from him into this reflective piece.

He did not deserve to live a life where he could not express himself.

He did not deserve to live a life where his mental illness was not taken seriously.

He did not deserve to suffer a life so suffocating to the point that he had choked, lost consciousness, and never woke up.

“I’d rather stop breathing instead of breathe stuffy breaths when I wake up.”

He had it all, the fame, fortune, love- “Why did he make the decision he did?” people asked.

“I was broken from the inside. The sadness that was slowly eating me, finally devoured me, I couldn’t overcome it.”

They could not grasp the perspective in which he viewed the world in. Nobody could.

How can one fully comprehend what it feels like when there seems to be no light found at the end of their dark tunnel?

During the week of your passing, I slept at late hours whilst staring at the wall, muffled sobs escaping from my lips and into my pillow.

I did not want to believe, nor could I accept that you were gone.

I feel sorry for not being able to do anything, even though I know I couldn’t have in the first place.

I strolled down the halls, head bowed down towards my phone as if I were texting someone important; I was really trying to keep my tears hidden.

School was a place to mourn on failed marks, not on the loss of a loved one.

Even then, people would say that I didn’t even know him, that I was just a fan- but that was not the point.

He had touched my heart so deeply that I didn’t have to “know” him to a establish a connection.

I skip each song on my playlist that has your voice- I cannot bear to hear the sound of its angelic beauty. Not yet.

Such sorrowful lyrics hide behind the soothing piano keys that lull people to sleep.

“Dear petal before me, bearing the thick scent that deceived me so that I wouldn’t be able to find you. You imprisoned me in the room of eternity, and now you smile guile-fully and snowy white.”

We were angry at ourselves, at others, and some admit, at you.

Ourselves, because we didn’t notice the signs.

Others, because they did not help.

“I thought it was easy for the doctor to blame my character or my voice.”

You, because you had left the world too early.

“But I’m used to just holding it in. Understand me…It’s not a scar leftover I could overcome.”

We say we’ve suffered- a competition of who had it worst, but why are we arguing against what your message has been all along?

“You should never tell anyone that ‘You are not the only one suffering’, ‘Everyone’s like you’, or ‘If you have the courage to die, you can live’. Physical scars and psychological scars are different. I hope everyone can think for a second that scars exist even if you can’t see them.”

You put others before yourself, displayed gestures of love and gratitude to your fullest extent, and encouraged people to feel their feelings.

“Cry out loud once. Look in the mirror and shake it off. I’ve cried like that before and others will have times like that too. Cheer up. You are not alone.”

You weren’t a celebrity that seemed untouchable or invincible, you were a human being on the same level as all of us, and so many people loved you for it. To think that you didn’t feel good enough as having accomplished anything, makes my heart ache.

You must have hopefully thought,

“When time passes, the things that I said were hard and complained about, they will become things of the past…”

“I didn’t learn how to turn boredom and pains into joy. Pains are pains.”

Whenever I sing, I remember to sing with passion because that is what you have always done.

You remind me to always be kind, to be self-aware and to self-love, to understand others, and to be human.

I no longer cry out of heartache- rather, out of the happiness you have brought and will continue to bring to my life.

You will live on through your music, your selfless acts of generosity, your family and friends, and your fans.

Thank you for everything. I love you.

“Up until now I have endured well. What other words are there. Just say ‘you’ve done well’. Just that much is good. Tell me I’ve done well. You’ve worked hard. You’ve really gone through a lot.”

He deserved to live a life where people could understand him, help with the pain.

He deserved to live a life where he could freely say that he hurt instead of keeping it in.

He deserved to live a life so promising that he could wake up in the morning, take a moment to breathe in the clear air, and let out a sigh of relief.

“Life is a series of encounters and farewells. I believe we grow in the process. For now, it [saying ‘goodbye’] is very sad but we will meet again. We can hope for that day to come soon, and we will be able to greet each other with much bigger welcome.”

Music Playlist as Tribute to Jonghyun

2 thoughts on “A Petal for Each Thought”