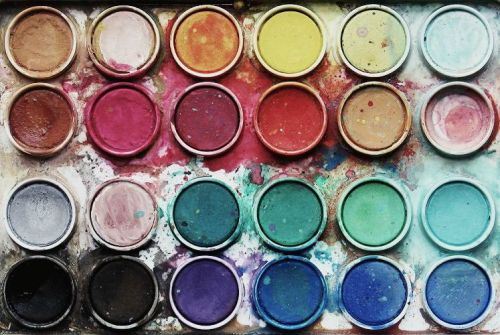 They are everywhere, involved in every aspect of our lives. Colours transform the dull and the depressive into the beautiful and the bright. Colours provide our lives with interest and with meaning. Colours allow us to distinguish what is dangerous from what is safe, what is healthy from what is dying, and what is valuable from what is insignificant.

The pale pink blush of a peony, the clear aquamarine of the ocean, the striking emerald of a tree’s leaves, the glowing yellow of wheat fields, the rose-red of your favourite sweater – it is because of these vibrant colours all around us that life becomes worth living. They evoke certain aesthetic and psychological responses, and it is often through colour that we experience emotion. As such, each distinct hue has come to represent certain simple, ubiquitous qualities: green is envy, yellow is cowardice, red is anger, blue is sadness…

But these specific colours are also associated with more complex concepts and experiences. Each colour is imbued with a variety of different, sometimes conflicting, meanings and associations – and as such, each colour is uniquely powerful.

In The Great Gatsby, author F. Scott Fitzgerald generally uses colourful imagery throughout the novel as a means through which to highlight the 1920s culture of vibrancy and decadence, but also to comment on the lurid distortion of morality in that time. He also intentionally uses an absence of colour to highlight the disparity between the upper and lower classes; wealthier settings are painted in an overabundance of vivid colour, yet poorer settings, most notably The Valley of Ashes, are described colourlessly. Colour in The Great Gatsby also serves to distinguish fulfilment from dissatisfaction, grand illusions from harsh truths, and life from death – after all, it is only after Gatsby’s death and the disillusionment of his grand persona that his mansion is ever described as grey and empty.

Though the general use of colour imagery is important, it is Fitzgerald’s use of specific colour symbolism to imply deeper meanings about certain characters or ideas that is particularly significant. Several colours are used to achieve this effect; however, Fitzgerald especially selects the colours green, white, and yellow to bring symbolic meaning to his story.

Green is naturally the colour of hope.

This is a universal interpretation of the colour; while green has come to represent many things in different cultures, the green of springtime is always associated with renewal and continuity after the harshness of winter. The appearance of green after the bleakness of white, therefore, is consistently and cross-culturally hopeful.

As such, the “single green light” on Daisy’s dock across the bay represents Gatsby’s hope for a future with her. (64) It also speaks to Gatsby’s belief that he and Daisy are ‘meant to be’; just as a green spring always reappears after winter, just as the “green light [always] burns… at the end of [her] dock”, he believes they will undoubtedly reawaken their lost love. (115) 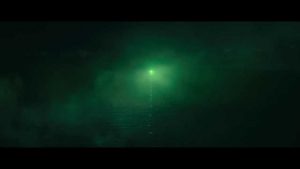 Yet, just as green represents freshness and renewal, it also connotes sickness and decay. The paradox of green in The Great Gatsby is that it promises Gatsby energy and hope but also indicates the eventuality of his dream’s decomposition.

In the context of our Western society, green has come to represent more than just hope or sickness; green is also associated with ambition and the idea of ‘moving forward’. In traffic lights, it is the colour that tells us to go ahead. It signals that it is safe to come forward, that the danger represented by the red light has passed. The green light invites us to move towards it, just as Gatsby’s green light does for him.

It is for him what a lighthouse is to a lost sailor; the green light is a beckoning beacon, promising him safety. Yet despite the inviting call of the green light, Gatsby is separated from it in every way – he is not entitled to Daisy, nor is he capable of physically reaching across the bay to touch this “minute and far away” light. (64) Though the light is green – this colour of hope and comfort – and is, therefore, beckoning to Gatsby, he is constrained by the reality of his circumstance. Here, it can be seen that Fitzgerald uses the paradox of the colour’s meaning and the context in which it is used to demonstrate the futility of Gatsby’s dream.

Paper money itself is green, and therein lies the final, and perhaps most significant, symbolic representation of green: it is a colour of materialism and greed. Gatsby’s dream of a life with Daisy was never realized. The failure of this dream was a result of their culture’s focus on acquisition – Daisy is selfish and greedy not by nature, but because she is the product of a society that values money more than happiness. And so, despite “[believing] in the green light,” Gatsby’s idealistic dream fails because it is simply incompatible with a morally corrupt, materialistic, and exceedingly green social environment. (176)

When Nick first sees Daisy, she is wearing a white “rippling and fluttering” dress, coming into view from behind white curtains, billowing around her “like pale flags.” (54) She appears to be almost angelic, wearing the colour white like it’s a halo, and is described as being pale and “bright.” (55) Daisy’s house and her surroundings are also described in white tones: the ceiling is like a “frosted wedding-cake” and her “windows [are]… gleaming white against the fresh grass outside.” (54)

As the narrative carries on, Daisy continues to be characterized by white imagery – we learn that an eighteen-year-old Daisy wore white and owned a white car, charming men with her apparent loveliness and purity. Her outward flawlessness and nobleness is part of what causes Gatsby to become so infatuated with her – to him, she represents goodness, a beacon of hope and wholeness in an otherwise chaotic world. Even Daisy’s name is evocative of whiteness – white-petalled daisies traditionally symbolize innocence, virtue, and sincerity.

However, white also has more sinister connotations: it is the colour of falsity and vacancy, the colour of superficiality and coldness. Daisy exemplifies this hollowness associated with white – though she is surrounded by luxury, she is wasteful of it, often complaining of boredom and wondering “what [she’ll] do with [herself] this afternoon, and the day after that, and [for] the next thirty years.” (132)

Daisy’s façade of pleasant purity gives way to her selfishness – she proves herself to be empty of compassion anytime it conflicts with her own pursuit of self-interest. In cold indifference and selfishness, she does not attend Gatsby’s funeral, despite his sacrifice on her behalf. Throughout the arc of their relationship, she has only ever accepted him when it suited her and has rejected him anytime his presence threatened the stability of her comfortable, materialistic lifestyle.

By ascribing the colour white to Daisy, Fitzgerald indicates that beneath the beautiful purity of her outward appearance, she hides corruption and coldness. Thus, Daisy also reflects the mood of the 1920s and represents the hypocritical moral standards and the superficiality of the Old Money upper class.

White things are, after all, doomed to be stained. And so in the end, white comes to represent an individual’s capacity for sin. Because the ‘white-pure’ Daisy was the representation of Gatsby’s American Dream, it is no wonder that Gatsby’s dream too was doomed to be corrupted.

If white is Daisy’s colour, then yellow is Gatsby’s colour.

Gatsby intentionally chooses to decorate himself and his surroundings in yellow tones, which speaks to the image he wants to project of himself. Because yellow commonly represents status, money, and power, when Gatsby wears “gold-coloured” (108) ties, plays “yellow cocktail music” (78) at his parties, and drives a “nice yellow” (135) car, he does so in an attempt to create an appearance for himself that embodies these qualities. Yellow’s associations with confidence and happiness also tie into Gatsby’s façade – using the colour yellow to express himself promotes his image as a man of wealth and success, but also of self-assurance and good-natured sincerity.

But yellow is a colour of contradictions – just as it represents joy and strength, it also represents cowardice and weakness. Yellow represents energy and goodness, yet it also symbolizes sickness and stain. Though it can be warm and cheerful, an overabundance of yellow can have a disturbing effect. Yellow can be spontaneous, but in this way, it is also unstable. The paradox of yellow is that though it is the colour Gatsby himself employs to build his confidence and develop his grand persona, it is also the colour that ultimately leads to his downfall with the hit-and-run.

The illusion of Gatsby’s grandeur is founded in the yellow he surrounds himself with, and his idealistic dream of a future with Daisy is also coloured by yellow; for example, he refers to Daisy herself as a “golden girl” (133). So, when Gatsby’s golden girl hits Myrtle with his yellow car, it becomes suddenly clear that yellow – despite all its complex meanings – most simply represents cowardice and fear. After all, a hit-and-run is a coward’s crime.

It is only because Gatsby was afraid of who he really was he ever tried to hide beneath a façade of yellow. He adopted his yellow surroundings to try and emulate the ‘golden’ lifestyle of the upper class because he was dissatisfied with his own truth and feared he wasn’t good enough as he was.

But in the end, yellow – no matter how bright and confident it makes itself out to be – will only ever be a less beautiful and legitimate version of gold.

It is what saves us from indifference and depression, what brings us meaning and motivation.

Each colour conceals a story and carries associated emotions and symbolic concepts with it. Each colour is uniquely 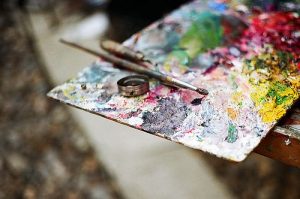 powerful, and it is F. Scott Fitzgerald’s understanding and use of this that makes The Great Gatsby such an influential piece. While utilizing colourful imagery to make a statement about the conditions of the time period, Fitzgerald more importantly uses specific colour symbolism – particularly with green, white, and yellow – to bring a deeper meaning to the story as a whole.

It is his awareness of the power of colour and the meanings of individual colours that allows Fitzgerald to be so successful in symbolically using them.

Colour, ultimately, is so powerful because it is inseparable from the human experience of life. As such, its meanings reflect the meanings of life itself, and through colour, we are able to distinguish truths and significances that would otherwise be invisible to us.