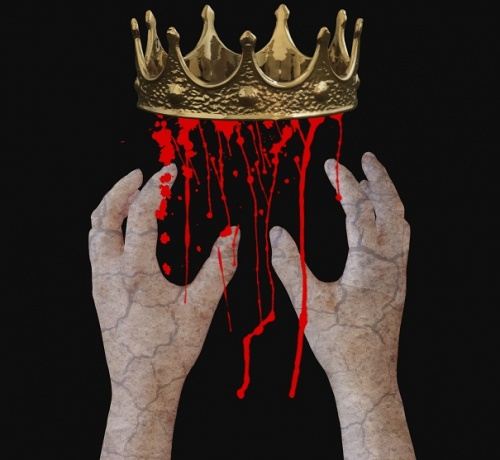 “The ways in which individuals struggle to restore honor and certainty”

A king. One simple word has defined life or death, fortune or poverty, recognition or obscurity – but above all: honor and certainty. A king is the highest position of any kingdom; a position held in revered honor and resolute certainty. By definition, honor is something that is held in high respect, who else is held in higher respect than the leader of a nation? Certainty is the firm conviction that something is correct, and who else enjoys the power of deciding what is correct? A king is what all members of the royal family desire to be, but only a prince is naturally next in line to become a king. Disrupting that natural bloodline can only result in the most unnatural of repercussions. Where else would we see a tale of things unnatural – things such as  interfamilial murder, cross marriages, and borderline incest – than William Shakespeare’s Hamlet? Once a reserved and philosophical man, Hamlet finds himself ousted from the natural bloodline of a monarchy by his very uncle. After Hamlet learns of how this shift of royal status occurred, he embarks on a mission: seeking ways to restore his ruined honor and evanescent certainty. Shakespeare makes it evident that when a once respected individual wishes to restore their position of honor, their morals are progressively cast aside as they proceed to act with increasing desperation to achieve this goal, as evidenced in the hours of introspection that Hamlet undergoes before acting to have his tarnished honor restored, bringing with it a satisfying amount certainty, all the while completely disregarding the impact his actions have had.

Early in the play, King Claudius, Hamlet’s uncle has just assumed his new position. Hamlet is openly cursing his circumstances, not only did he have his honor and certainty taken from him in one powerful strike – his own mother has remarried to his uncle as though there was no problem with this. Naturally, it only makes sense that Hamlet would be enraged – how dare Claudius do this to him and his mother? Yet – even throughout the anger, Hamlet never pledges that he is going to do anything about his predicament. Rather, he simply is flaming for the sake of expressing his feelings, spare any commitment into actually acting on his thoughts. Anything that he can think of is unspeakable – never would he consider harming Claudius to avenge his father. No, he merely resolves that his predicament is destined to result in ruin, but he is in no position to take action. “But break, my heart, for I must hold my tongue”, (I.II.158) he exclaims. This lack of motivation is a clear look into Hamlet’s mindset at the beginning of the play. He understands the gravity of the situation – something truly is rotten in the state of Denmark – yet his moral code is keeping him in check. He fully admits that there is no civil (or rather, morally correct) action that he can take to address this issue. Anger is a natural reaction for any individual who has lost their entitled honor, yet everybody will pride themselves on the ability to control their emotional outbursts. And such is the beginning of a vicious cycle of denial and anger, suppressing small flickers of envy simply allow their feelings to remain dormant; but only for some time. We enjoy holding ourselves to a high and honorable moral code, constantly flaunting our ability to appear unfazed by our loss of honor and certainty, until the dreadful hour of explosive and destructive mania consumes us.

When is there a more perfect opportunity to take revenge on someone when they are quite literally blind to your presence, kneeling with their back exposed, and you happen to have a dagger in your hand raised above them? Hamlet could simply have dropped the blade and his job would have been done. All his problems resolved with the release of a few precious muscles. Something stops him. It certainly wasn’t forgiveness. “Up, sword; and know thou a more horrid hent: / When he is drunk asleep, or in his rage… / Or some act that has no relish of salvation in’t”. (III.III.89-94) He decides that it is too much of a risk to avenge his father while the perpetrator is praying, lest Claudius’ soul be sent to heaven in present. Had Hamlet actually been completely engrossed with the ideal of restoring his honor and certainty, there would have been no question as to if ending his uncle was a good idea or not. He may not be desperate, but there is still intent now, something that was not as apparent earlier in the play. Hamlet debates the benefits and consequences of this moment, implying that he has not yet reached the level of blind ambition, but he is far beyond looking for ways to resolve this peacefully. His morals are, to some extent, still intact. Such is the deterioration of an individual. Murder is, simply, the universal ultimate sin, the unquestionable line that should never be crossed. To even consider the act is worthy of branding someone mentally unstable, immoral. But it is the prolonged loss of our honor and certainty that brings us to this sense of desperation; we become desperate to have the status we once took for granted, and the more we want something, the more we are willing to risk in order to meet our marrow-deep hunger for honor and certainty.

There comes a certain point in anyone’s life when they are completely sick and tired of avoiding what they want to do. That particular point is when they force themself to commit. Hamlet finds this moment on a plain, observing the army of Fortinbras, awed by its size. He compares the Prince of Norway to himself; realizing that the difference between a successful man and a lesser man is the ability to act. Hamlet recognises that if he ever wishes to be successful, he must act, must stop delaying. He resolves that “from this time forth, My thoughts be bloody, or be nothing worth!” (IV.IV.64,65) Swiftly following that realization is action. He alters the message that was to be delivered to the king of England – claiming that his friends Rosencrantz and Guildenstern are to die, rather than Hamlet himself. Upon reaching his tipping point of desperation, Hamlet has lost all sense of morals. He could have simply left and not tampered with the note, yet his thoughts have become bloody, and he decides that his childhood friends are to die. His moral code has been replaced with blind ambition – and as expected, people begin to suffer. Will actions like these ever be forgivable? Can we sympathize with someone who has blindly succumbed to their desire to become the man they once were? People find themselves in the realm of irrationality when they feel cornered by their circumstances, and their struggle to restore their honor and certainty becomes so dominant that an individual is no longer able to focus on anything else. This desperation is what trashes morals, it is what makes any once unthinkable deed seem like a very good idea – it is what, ultimately, we pride ourselves on being able to avoid. It is also, unfortunately, the catalyst to the single most overwhelming torrent of blind ambition that few can struggle against.

Everybody has a breaking point. Everyone. Hamlet’s breaking point was his chronic denial of any sense of certainty of future; being stripped of the honor he used to take for granted. Hamlet knows he needs it to return to him, but Hamlet isn’t about his quest to achieve that goal – rather, over two thirds of the play is spent simply considering if it is morally correct to act. Initially, he thinks it is not, and so he makes no move to restore his honor and certainty. Later, he is in a clear position to reclaim what was once his, yet he still decides that it is not worth action yet. Only when he truly gives up on his morals does he decide to act, actions that have immediately disastrous consequences.The presence of morals and the ultimate struggle to restore honor and certainty are inversely proportional forces within oneself; only when there is a lack of one can the other proceed unchecked. It is a delicate balance that takes a healthy degree of personal certainty to reconcile, ironically. And, of course, who else would we expect to have the strongest sense of certainty in a monarchy? After all, a king does define the bridge between life or death, fortune or poverty, recognition or obscurity. Shakespeare takes a vicious twist on the modern saying “When there’s a will, there’s a way”. In the name of the ultimate struggle to restore honor and certainty, any way is a viable way… At least, if you wait long enough.