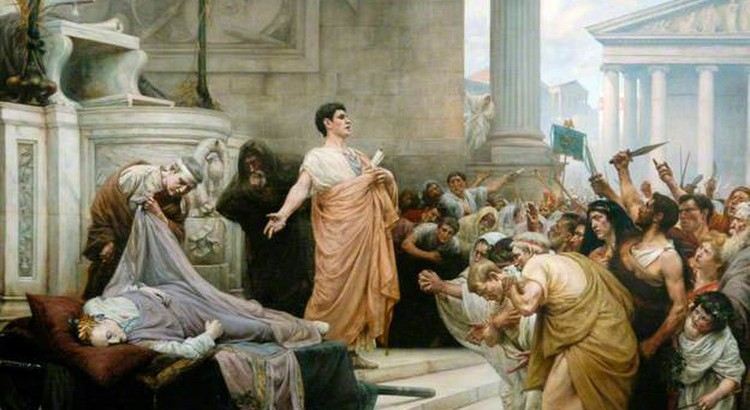 As a person who undoubtedly appreciates Shakespeare’s works, but often does not like them due to the monotony studying them in high school has brought, I always relish the chance to see a Shakespeare play on the stage, as the characters and the story are seen the way they are meant to be seen – not through a late night SparksNotes cram session.

Vertigo theatre has an innate ability to bring a new flair to every play I’ve seen, and their recent adaptation of William Shakespeare’s Julius Caesar was no exception. I came into this show expecting great things, and I received even more.

First of all, Vertigo made a bold and somewhat risky choice to perform Caesar on a thrust theatre setting. Thrust theatre is a setup that has one main stage bordered on three sides by three different audience sections that are usually closer to the ground than a typical proscenium theatre. This created an extremely intimate and close mood with the audience members, however, and further enhanced battlefield scenes by having the stage lower to the ground with the audience looking down upon it. Additionally, the thrust theatre was similar in construct to what I imagined a Roman Colosseum to look like. All in all, the risk involved with this stylistic choice paid off extremely well in my opinion.

One of the most beautiful and interesting aspects of this show was the set design. In the side of the stage closest to backstage, there was a cracked statuesque portrait of Pompeii hanging from the ceiling. There were five Roman columns situated spread around the edges of the stage, and the rest of the stage was bare. The bareness of the set design allowed the actors to create the scenes themselves, which I think was a smart decision especially in conjunction with the thrust theatre.

The costumes were simple but reflective of the time period. However, I wished that the costumes were perhaps a little more intricate in detail, because Julius Caesar wearing a dress shirt didn’t quite sell it for me.

The acting in the show was absolutely superb – Robert Klein as Caesar was a powerful and moving precence. The scenes in which his ghost appeared made me yearn to see more glimpses of it, because it caught my eye every single time. Directorial wise, I think I possibly would have made the ghost linger in all of Brutus’ battle scenes, but I also understand that that would have taken more careful choreography because of the way in which the theatre was set up.

One thing I did not like at all was Marc Antony’s accent; perhaps it was just my ears being picky, but I felt as if Ryan Luhning wasn’t grounded enough in his character, and therefore it felt as if he were still speaking as the actor and not as Marc Antony. There were times where I could have sworn I heard a Canadian redneck accent – if there was an “eh?” in Antony’s funeral speech, it wouldn’t have sounded out of place to me.

Overall, I thoroughly enjoyed this play, and I look forward to seeing more of the Shakespeare plays held by Vertigo in the future.

5 thoughts on “Hear Me For My Cause: A Review of Vertigo Theatre’s Julius Caesar ★★★★”