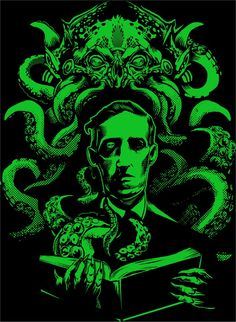 Hardy a surprise that someone as I would choose such a person to idolize, though it may come as a surprise to find that I do not, in fact, idolize H.P. Lovecraft. If anything, I envy him, even distain him. Don’t get me wrong, I do love Lovecraft, though not in the way you would assume.

Lovecraft is eloquently spoken and undeniably gifted, but he is cold, unfeeling, and calloused. This element is what drew me to him originally: his macabre apathy. He writes a world of strange horrors, but he does not share the romanticism of Edgar Allan Poe or passion of F. Scott Fitzgerald. Lovecraft is stern. Undefiable lines of emotion are written into his works yet the barriers of reality remain permeable. He knows of horror, yes, great fears that terrorize your soul into approaching madness. Yet, he knows not of tragedy and the anguish of a heart that has antecedently broken. Once, I was largely similar, however his writing has changed this perspective toward indifference within me. I was addicted to this non-emotion like a cigarette twixt my lips. Seeing an author just the same, I latched onto him and for years never took the time to contemplate why. “Why” is what I ask now, and I have come to the conclusion that Lovecraft embodies everything that I once was. He was my outcasted twin from a different century. He evolved into a being enamoured by the horrors of the unknown and nothing more, while I have become acquainted with monolithic passions that send me barreling through the unknown.

Like the rubber-ish tentacles of Cthulhu, I am green with envy. Or maybe I’m not. Envy, I find, is often easily confused with loathing. I envy his unfeeling, simultaneously holding it in contempt. It is everything I have wished to be and everything that has ever hurt me. Lovecraft’s writing wholly embodies the the revulsion to which his characters are subjected, lingering infatuation and disgust. This is what I used to strive for: to be so in love with the foul being of which I write while at the same time degrading them into static, devilish monsters, all the while having the skill and ability to project this within the reader. Here, I bring in “The Outsider (H.P. Lovecraft),” a tale of insidious naivety. (Honestly, this is the time where I reccomend you go read the short story. Seriously, read it. http://www.hplovecraft.com/writings/texts/fiction/o.aspx ) Our unseen narrator lives in the most undiluted form of loneliness, reading about a world of which he has never experienced. Fuelled to be part of this written world, he breaks from his solitary confinement to find those he encounter terrorized by a monstrous behemoth. Touching the beast, he touches the glass of a mirror. This piece is single-handedly the most influential element of my life (to date). It is one of the few times Lovecraft actually has shown more than just terror; here he shows an innocent grief. Innocent grief: a sinless child whom upon reaching out to the world is varnished in the world’s hatred. 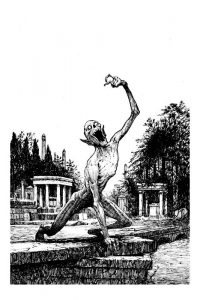 I’m innocent. Or at least I was. I want to love as much as be loved, but my mind is ill. With illness comes a perceived toxicity that if anyone so much as dares to get close, it will trickle from my eyes and devour them as it once did me.

H.P. Lovecraft knows how to terrify, though I want to cast feeling as much as fear. I feel the same toward Lovecraft as he does his monsters: infatuated and repelled. Perhaps, I am one of Lovecraft’s monsters and he is mine.

One thought on “From Even the Greatest of Horrors Irony is Seldom Absent: The Words”